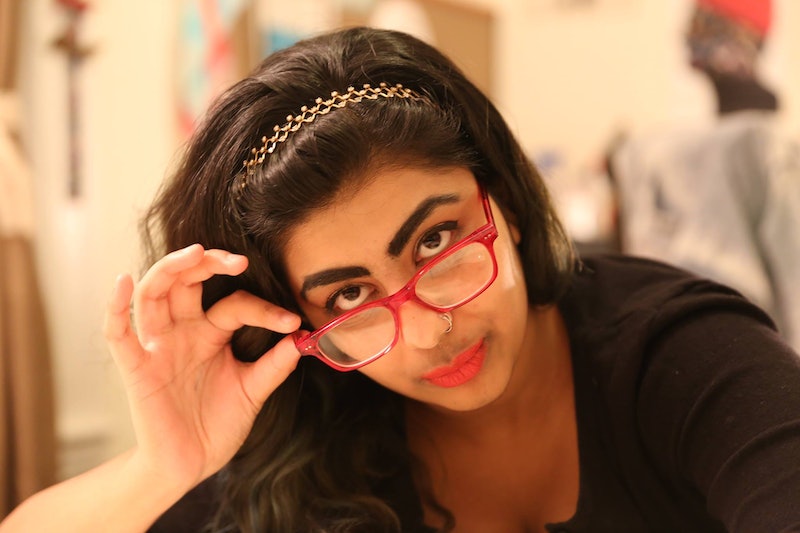 There are a variety of different ways race-based discrimination can manifest itself. But whether it's a hate crime or a racially-charged microagression, all forms of this kind of discrimination need to be called out for what they are — that is, racism — even when people say, do, or believe things they don't think are racist, but actually are. While not all racist acts may be committed consciously, that doesn't take away from the fact that they're racist in the first place. Developing an awareness of these sorts of acts is half the battle, though, so here's a good place to start.

People who experience racism are, obviously never, obligated to respond to or educate racists. As a brown woman who receives a good deal of racist and ignorant comments daily, however, I've personally grown enthusiastic about educating people to the best of my abilities when it comes to things that are not OK to say or do. I understand that racism and other forms of oppression are systemic and deeply rooted in culture, language, and history; furthermore, I also know it's problematic to assume that everyone has had the privilege of an education or access to a forum where these social factors are dismantled and discussed. Not everyone has had the opportunity to experience a diversity of viewpoints, and as such, I usually give someone the benefit of the doubt when they say something racist. Instead of assuming the worst about them, my strategy is to begin a discussion about it.

But regardless, saying racist things that you don't know are racist doesn't actually take away from the underlying racism of the statement itself — which is why it's so important to understand that some things are just not OK to say or do. Here are five things you might not think are racist, but very much are.

Of course, it's always a positive thing not to assign characteristics, stereotypes, or judgments based on race or skin color. However, when you refuse to acknowledge color at all, you're also refusing to acknowledge all the oppression certain groups of people face based on the color of their skin. By claiming yourself to be "colorblind," you're turning your back on the fact that police brutality disproportionately affects black people or that racial profiling at the airport happens mostly to brown people or people who fit the Western image of Middle Eastern or South Asian people. It's important to see color to understand and acknowledge race-driven injustice.

2. Saying "Making This a Race Issue Is Racist of You"

Sometimes when people say this, their underlying statement may really be, "Race is a social construct." This is absolutely true; the only reason the word has meaning is because society has prescribed it meaning. But while the idea of race may be socially constructed, the consequences of being a person of color in the United States and other countries are real. It's ridiculous to expect people of color to ignore racism and prejudiced behavior, even if they do believe race is socially constructed. If something is racist, making it a race issue is not being racist — it's calling out the perpetuation of harmful ideas.

3. Arguing That It's Racist To Acknowledge That White Privilege Exists

White privilege exists. White people have white privilege. There is no systemic discrimination against white folks, which is why it is to say that white privilege exists is not racist. Oh, and by the way, no, the existence of things like BET don't indicate black or PoC privilege, because at the end of the day, the vast majority of television and media representation belongs to and is created by white people.

Legislation that ended segregation and voting discrimination laws was wildly important, yes, and it was certainly a step in the right direction for the United States. However, to say that racism ended with the end of segregation is misguided for a few reasons: First, laws don't always translate to reality; and second, there are, unfortunately, many more ways of being racist than segregating pubic accommodations. Saying racism ended in the '60s is kind of like saying you're "don't see color" — it's a failure to acknowledge hard truths.

5. Fetishizing or Discriminating Against Romantic or Sexual Partners Based on Race

First things first: Yes, it is OK to have a "type." You can be into bad girls and good boys; your criteria could just be "nice person to adventure with"; you can prefer to date someone who's really funny; and so on and so forth. None of those preferences are bad. It is, however, a problem to generalize groups of people based on skin color or race.

When someone says to me, "Sorry, I don't date Pakistani girls," what it's really saying — whether the person knows it or not — is "You're not worthy to date simply because of stereotypes I've associated with your culture," or "Your beauty doesn't fit white, Western standards, so there's no way I could be attracted to you," or "The thing that's wrong with you is your skin color." Similarly, fetishizing someone for their race is equally problematic: It, too, plays into stereotypes, implying that there's a specific way people of certain racial backgrounds are "supposed" to look or act. Fetishizing based on race also "others" people, as well as reduces them to an object or a sexual fantasy.

So let's just... not. We're all people, and we all deserve to be treated as such.