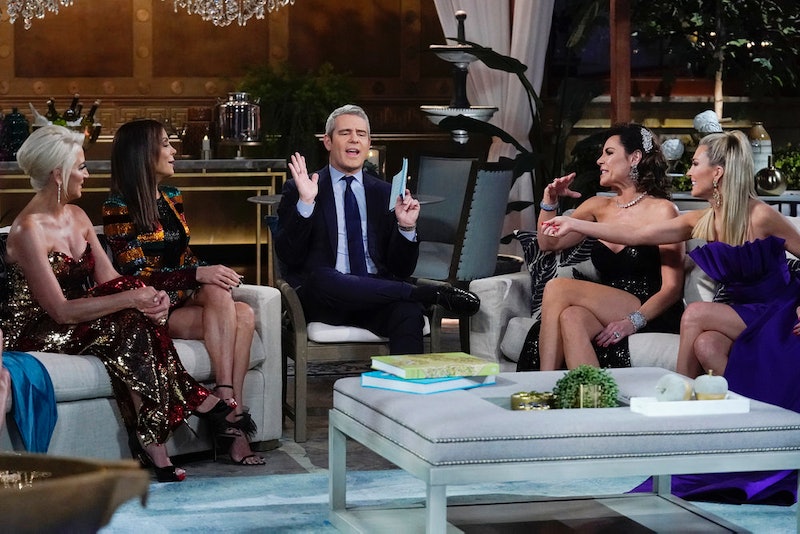 It's hard to be a newbie on a Real Housewives franchise. Not only do you have to befriend the cast members who didn't bring you into the show, but you also have to learn the rules and rhythms of a cast who, in the case of Real Housewives Of New York, have been playing together for over a decade. Even as just a "friend of the show", it's a big thing to jump into, and in Season 11, Barbara Kavovit has moved through it with aplomb (and one big, bad hot mic moment). But it that enough to get Barbara on the Real Housewives Of New York Season 11 reunion? If Bravo and Barbara have anything to say about it, she earned a spot on that couch.

Barbara got her place on the show (assumedly) because she was already acquaintances with so many in the cast — Barbara knows Bethenny, Dorinda, and Luann well, even being there during Luann's recent intervention. That said, Luann may not be so thrilled with Barbara, since Barbara was caught with a hot mic during the Real Housewives Of New York Season 11 finale telling another audience member that Luann could "really hold the show by herself" and that she "can't sing."

This isn't the first time that this has happened to Barbara, as she was also caught questioning Luann's relationship with then-husband Tom D'Agostino a few seasons ago. Check your mic, girl! These are rookie moves!

Despite the fact that Luann wasn't too pleased with Barbara, she still earned a spot at the reunion. She's not on the official seating chart, but since Barbara is merely a "friend of," she wouldn't be. According to Radar Online, Lisa Vanderpump's favorite online publication, Barbara only filmed the reunion for about a half an hour, which is not that much time to get through the drama of an entire season. Guess they didn't focus too much on her, but that doesn't necessarily bode well for Barbara's tenure on Real Housewives Of New York. Welp.

But who cares? From her businesses to her time on RHONY, Barbara was just trying to do good — she's even donating her very pretty, very sparkly reunion dress to a person in need. On her Instagram, Barbara said, "Going to donate it to 1 lucky person who might be in need of a gown for a special occasion!" Isn't that nice?

Barbara doesn't seem that stressed about not getting asked back to the show — as far as she's concerned, she rocked it. Barbara told Page Six, “Being new to the group and not being embraced the way I think I could have been embraced, I think I held my own pretty well. It was great to learn how to be around these types of women and still be able to have a sense of self.” Amen to that, Barb!

Will she return? Will she go on to sell more tool sets for women? Whatever Barbara's next step is, she's certainly going to excel — hopefully she'll set it up on the reunion.