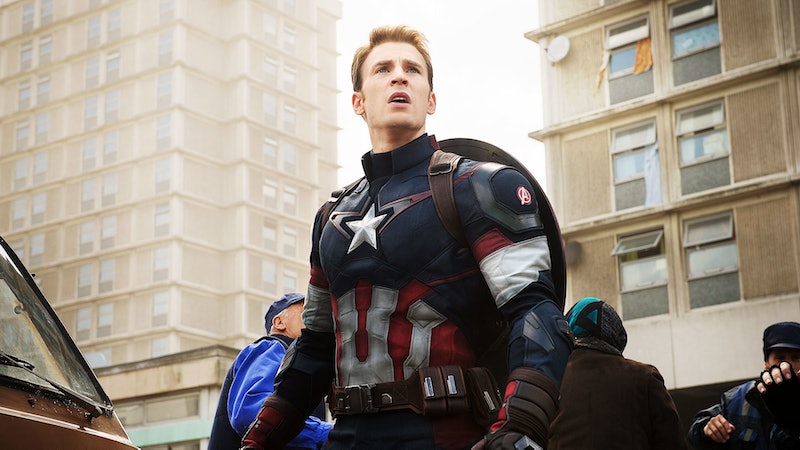 Speculation on what will happen in Avengers: Endgame has flown fast and furious since Infinity War's traumatic ending, when a single finger-snap from an all-powerful Thanos instantly eliminated half the universe, Avengers included. For those MCU folk remaining, fans are speculating how they'll deal with what's been done - the main hope is that it'll be un-done instead of just avenged, and that the charge will be lead by Avengers leader, Captain America. Right now top theories include the Quantum Real and Time Stone, but they all boil down to the same question - will Captain America go back in time in Endgame?

He's the Avengers member who's time-traveled the most already, albeit by normal, non-quantum means. Frozen from an earlier war, Captain America's more a fish out of water than even Thor — at least for the god everything is unfamiliar in a new realm, while Cap's world has completely changed from his recognizing. So the tantalizing possibility of time travel would resonate the most emotionally for the Avengers leader. It would also give him a meatier role than in Infinity War, something the film's writers point out was intentional.

Speaking to io9, Infinity War and Endgame writer Stephen McFeely said, "sometimes we gave ourselves permission to tell more story for a character in Endgame than in Infinity War...People counted Cap’s lines [in Infinity War] and he had like 20. So Cap steps forward, as you can probably tell, pretty dramatically in Endgame. And that’s because we knew some people had more interesting stories after [the Snap] than before it.”

Interestingly, many of the time travel theories hinge on Captain America without him actually traveling through time himself. Comicbook.com points to a new Endgame toy where Cap's wearing an earlier suit as proof the remaining Avengers will come to Cap, as opposed to the more awkward reuniting of current-time Captain America and Tony Stark post-Civil War squabble. Screenrant bolsters the idea with set photos showing Captain America wearing an earlier outfit, while the rest of the Avengers wear current outfits with interesting new devices, including Ant-Man, whose quantum-realm travel is one of the leading time-travel loophole theories.

There's plenty of time-bending possibilities on the table: Captain Marvel's abilities, the Quantum Realm, the Time Stone and Doctor Strange's possible use of it already, but the question is, how will the Avengers make use of them? Even if the Captain America in Endgame isn't the one we left in Infinity War, he's still a part of the team and still working towards the same goal as the rest of the Avengers: stopping Thanos. A breakdown of a Reddit fan theory on GamesRadar says that the only way they can possibly stop Thanos is to actually stop themselves, by heading back to points in time where each Avenger has an opportunity to redo choices that will prevent Thanos from ever assembling the Gauntlet. For Captain America, that might mean going far enough back that the Avengers never even needed to assemble.

Esquire breaks down another Reddit fan theory positing the most noble, and conveniently full-circle end for Captain America, whose actor Chris Evans told the New York Times he "has no plans to return to the franchise." Captain America (well, The Avengers -era Cap; time travel gets pretty confusing pretty fast) the furthest from his own time, returns to it with the rest of the present-day assembled Avengers to fight Thanos (who also has a Time Stone, let's not forget), resulting in both his death and the rest of his life - by dying saving his team, he's reset his own future, and Captain America finally gets to live his life with Peggy while simultaneously never coming back to the future he helped save.

It'd be a bittersweet ending for fans who've grown to love the Avengers leader, but after all, parting is always such sweet sorrow, and with the many time-bending possibilities on the table, this is one that would bring things full-circle.