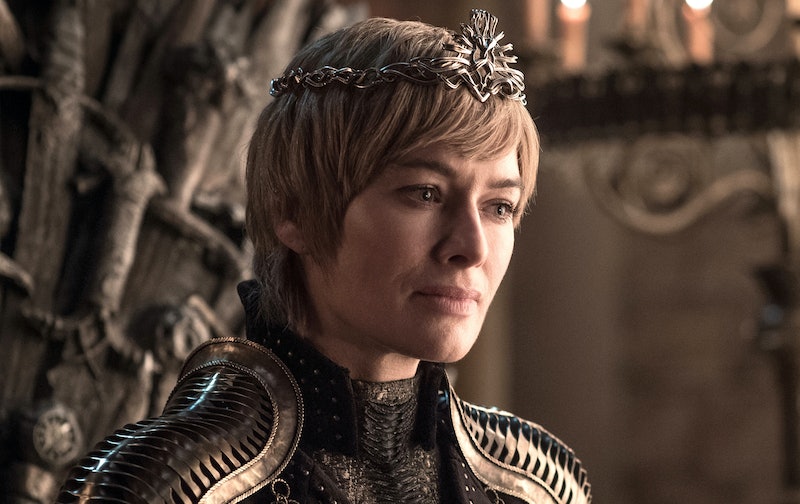 When you play the game of thrones, you win or you die. And there's no one who has played the game harder than the person responsible for that quote — Cersei Lannister. After eight seasons of scheming to stay in power, will Cersei die in Game of Thrones? It's pretty hard to imagine a scenario where Cersei survives the HBO series when she has made so enemies and White Walkers are headed south. But Cersei has managed to outlive a tremendous amount of characters — often thanks to her murdering them. So let's review what the current queen's chances of survival are ahead of the Season 8 premiere on April 14.

Cersei has always looked out for herself and her loved ones first and foremost. It's that fierce sense of Lannister loyalty ("Everyone who isn't us is an enemy," she told Joffrey) that led to her having husband and the king Robert Baratheon killed in Season 1. Throughout the series, she has continued her murderous streak, most notably when she blew up the Great Sept of Baelor with wildfire, but she somehow has landed on the Iron Throne pretty much with impunity.

Through all this death and destruction, her desire for total power has increased. Even the loss of her three children — which was prophesized by Maggy the Frog when Cersei was just a child — has only seemed to fuel her pursuance of omnipotence.

Cersei would rather die than give up the throne. So she's going to be killed unless she defeats all her enemies and secures the Iron Throne for good. A future on Game of Thrones where Cersei wins in that way is bleak and honestly, it probably wouldn't actually bring Cersei any happiness either. Even when the rules don't dictate she should be in control, Cersei had continued to connive and kill for power against the odds. So say she finally secured her position as ruler with no one left to question her claim to the throne — would Cersei really go on to live a long and happy life?

That's most certainly a no since the White Walkers are coming to kill all the living. Sure, Cersei could take out Jon and Daenerys after they defeat the Night King. But fighting Cersei seems like small potatoes compared to winning the battle of the living and the dead. Plus, besides Dany and Jon, Cersei has a plethora of other enemies who want to see her gone for good.

It's telling when discussing Cersei's fate that so many theories are about how she will die. There are the people who think that one of her brothers will kill her — even Nikolaj Coster-Waldau thinks Jaime killing Cersei makes sense. (Although his support should probably make fans doubt that outcome.) Outside of her bloodline, Cersei has been on Arya's death list for years. And the vengeful queen being killed by the equally-vengeful-but-far-more-righteous Arya Stark would be the crowd-pleasing ending for Cersei that would lead viewers to give standing ovations to their TVs.

Then, we must go back to Daenerys, who is only halting her attack on Cersei because she realizes that there will be no Westeros to rule if she doesn't help Jon defeat the Night King. Dany doing something so noble and brave does temporarily give Cersei the advantage. But Cersei's small-mindedness has nearly caused her own destruction in the past. For example, when she gave the High Sparrow too much power in an effort to destroy the Tyrells.

So Cersei beating everyone and winning the throne at the end of Game of Thrones would not only be unsatisfactory for fans — it would be unrealistic. Sure, she's smart. But she can't see the forest for the trees regarding what's important for the rest of the world, so she's kind of fighting her own isolated, meaningless battle. Because while the show is called Game of Thrones, the book series is called A Song of Ice and Fire — and it's the battle between ice and fire that really matters.

When it comes to Cersei, it better be when not if she'll die. That has nothing to do with whether you like, love, hate, despise, or admire Lena Headey's character. What it boils down to is: If you want humanity to survive, Cersei has to die. So unless the end of Game of Thrones is going to be Cersei ruling over the land of the dead as the Night King's queen, she must finally meet the fate that she ensured some many other characters met. And don't worry, fans of Cersei's murderous ways. She'll surely take out a devastating amount of characters before her time on the show is through.