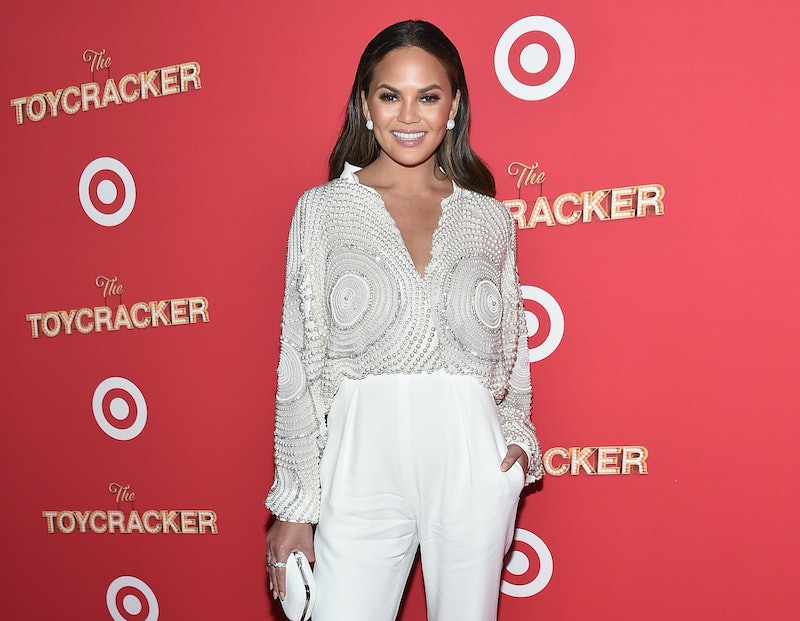 Throughout the election, Chrissy Teigen never faltered when it came to providing Donald Trump with the most hilarious, insightful, and politically astute comebacks. She has continued to be outspoken following the election results, which begs the question, will Chrissy Teigen be at the Women's March on Washington? Update: On Jan. 20, during the Inauguration, Teigen tweeted that she would be attending the Women's March: "i was going to go to sundance to support john tomorrow but feeling compelled to support my fellow women. see you at the women's march, DC."

Earlier: The president-elect's often offensive social media posts have led to countless celebrities taking him to task, and Teigen is one of the best. On June 16, 2016, she tweeted Trump, "I will never stop talking about how horrible Donald Trump is," and her refusal to back down or be intimidated has quickly made her the perfect person to follow on Twitter.

The model and author identifies as a feminist, and told The Huffington Post in Oct. 2014,

People have sorely messed up the definition of feminism. It isn’t saying this is wrong and this is right. It’s having the power to do whatever the f*ck you want. It’s about having your own beliefs and staying true to them.

While many celebrities still steer clear of labelling themselves feminists, Teigen is proud to call herself one, an attribute she shares with the organizers of the Women's March on Washington, which takes place on Jan. 21, 2017, a day after Trump's inauguration.

As a celebrity that's been adamantly anti-Trump throughout his campaign, she would be a perfect fit at the Women's March on Washington. The official website for the event says that the "rhetoric of the past election cycle has insulted, demonized, and threatened many of us," something which Teigen has been quick to stand up against. The event seeks to "send a bold message to our new government on their first day in office, and to the world that women's rights are human rights." Clearly, Teigen shares the aims and ambitions of the Women's March, so, while she has yet to confirm whether she will be attending, it wouldn't be at all surprising to see her there.

Several celebrities have already confirmed their attendance at the Women's March, including Amy Schumer, America Ferrara, and Debra Messing. Chelsea Handler is leading a sister march in Utah. Whether or not Teigen participates, the model's staunch anti-Trump stance has seen her stand up for people all over the world already, which is inspiring.

More like this
Are John Legend & Kanye West Still Friends? The Singer’s Latest Update Is Candid
By Brad Witter
Christina Aguilera Took A Powerful Stand At Brighton Pride
By Sam Ramsden
Beyoncé & Madonna’s “Break My Soul” Remix Honors A Group Of Black Icons
By Stephanie Topacio Long
'Scream’s Courteney Cox Has Broken A Major Horror Record
By Sophie McEvoy
Get Even More From Bustle — Sign Up For The Newsletter