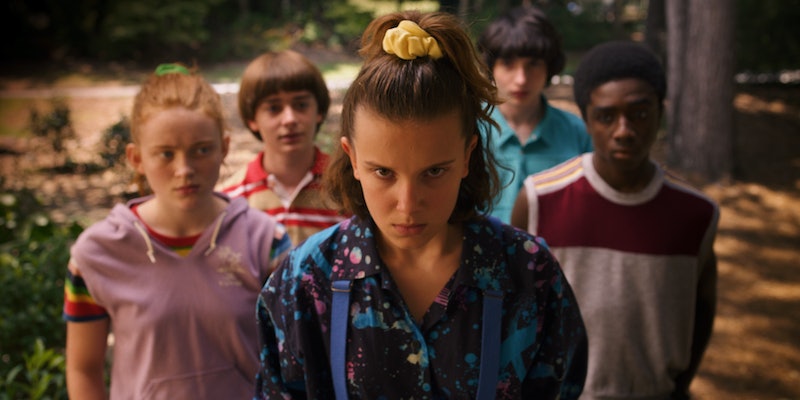 Spoilers ahead for Stranger Things 3. There are many dark and terrifying things in Netflix's Stranger Things, so it's always been comforting that the Hawkins gang had the telekinetic Eleven to protect them. Every season has introduced a stronger and stronger monster, but Eleven has always found a way to save the day. And even though, yes, Eleven loses her powers in Stranger Things 3, the end credits scene tells us she's likely going to get them back — it's just not going to be easy.

During the final battle with the Mind Flayer, Eleven appears to lose her powers after she discovers that a part of the Mind Flayer is still inside her leg. Eleven manages to get the bad blood out, but after that its like she's short-circuited: no matter how hard she tries, she's unable to tap into her powers. Even after the Mind Flayer has been defeated, we see her try to move a teddy bear to no avail. However, that doesn't mean her powers are gone for good.

Let's revisit how Eleven's powers even exist. Her mother Terry was a participant in the CIA program Project MKUltra, which aimed to develop mind-control techniques for use during the Cold War. Terry, unaware she was pregnant, was given a cocktail of psychedelics and put under extreme testing conditions. This apparently gave Eleven telekinetic powers while in the womb. Strange, yes, but as far as we know that's totally unconnected to anything in the Upside Down. Therefore, it stands to reason that Eleven's powers can return regardless of what the Mind Flayer did to her — and it may have not even intended to strip her of her powers in the first place.

The real reason Eleven couldn't fight is likely much more simple than the Mind Flayer finding a way to neutralize her: she was tired, and likely scared. She expended a lot of energy trying to locate Billy, and then had to fight the monster and the Russian guards before operating on her own leg. Eleven's much stronger than she was in past seasons, but so was the Mind Flayer's monster, and she had to run out of juice eventually.

We also know her powers are linked closely to her emotions, with earlier seasons showing her accidentally flinging people or shattering windows when she was angry. She was already upset about the Mind Flayer telling her that it was going to kill her friends, and her leg wound looked excruciatingly painful. There's also the stress of seeing the monster: it was way larger than anything the kids had faced before, and Eleven realized in the cabin that she could barely fight it, much less stop it from hurting her friends. That's terrifying, and it makes sense that her fear just overrode any grasp she had on her powers in the moment.

It also makes sense that Eleven is struggling to reconnect to her powers even months later. She's still dealing with the traumatic event of losing Hopper, the only true parental figure she's known. She's also moving away from her friends to an unknown situation. Her being unable to access her powers seems to be part of her grieving process, so until she's able to face what happened she likely won't be able to move past that mental block.

The end credits scene hints that there's hope, though. We see a prison in Kamchatka, Russia where they have both a Demogorgon and an American prisoner, who we're never shown. The hope is that the prisoner is Hopper, and with both him and the Demogorgon alive, Eleven has a pretty good reason to find it in herself to reconnect with her powers. She might have to go on a soul-searching journey again for that to happen — maybe even find Kali again, or other children who were experimented on — but Eleven is undoubtedly going to power up again in Stranger Things 4. Really, with the Russians and the Mind Flayer showing no signs of stopping, she has to.