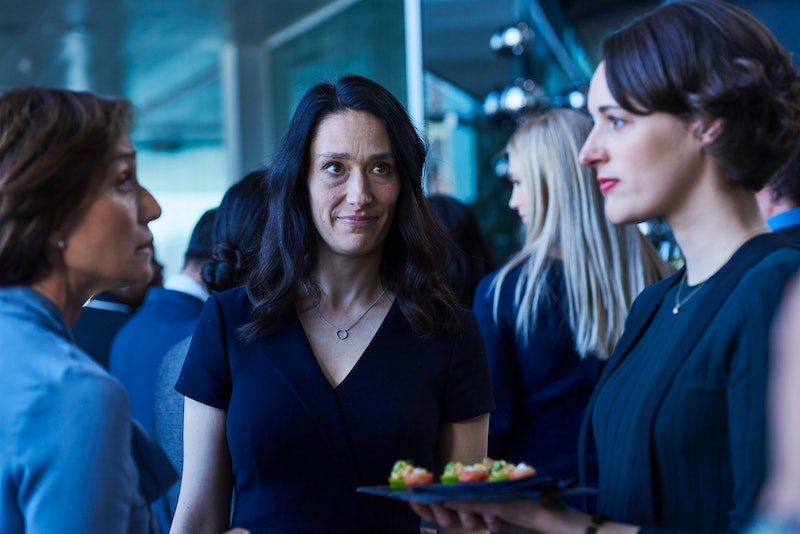 If you, like many others in the UK, have become obsessed with Fleabag, you're probably wondering if there'll be more of the witty comedy series. After all, surely there's appetite for further episodes — especially ones concerning that hot priest. So will there be a Fleabag season three? Well, one of the series' main actors has let slip the answer.

Grab yourself a box of tissues for, according to Sian Clifford, the answer is no. Clifford — who plays Fleabag's sister Claire — appeared on BBC Breakfast on Friday when she uttered the Fleabag fans across the country have been dreading: "There will not be a third series. This is it." Fans may be devastated, but the actor believes ending the show after just two seasons is the right decision.

"I've described it online as this beautiful, perfect ending, and I think it is, but I think what it's closer to is poetry," Clifford said in the BBC interview. "I think people will accept this is the end when they see it, because I think it is complete. I think the story is complete."

I suppose viewers will be the judge of that. But considering everything the series has got right, creator Phoebe Waller-Bridge can't have got this so very wrong. Can she?

Fleabag debuted in 2016. Since its first airing, it's resulted in viral moments, five-star reviews, appearances from Olivia Colman, and a growing obsession with Waller-Bridge. The 33-year-old writer and actress has developed a penchant for doing things differently. Not only has she made breaking the fourth wall cool, but she is also the person responsible for writing and developing another insanely brilliant TV series, Killing Eve.

So what will Waller-Bridge get up to after Fleabag comes to an end? Could Killing Eve season three be on the cards? (The team have already announced season two is in the works.)

Well, whatever happens with Waller-Bridge, one thing's for sure: she'll continue to focus on ripping to shreds the stereotypes that have surrounded female characters on TV and in films. Fleabag's titular character (played by Waller-Bridge) couldn't care less about her biological clock, but does care about improving herself for herself.

This lens is also applied to Killing Eve's slightly unhinged Villanelle. Conveniently, Waller-Bridge spoke of the importance of seeing such women during a recent appearance on The Andrew Marr Show:

"I think people are slightly exhausted by seeing women being brutalised on screen," she said. "We’re being allowed to see women on slabs the whole time and being beaten up, and in some ways that’s important to see because it shows the brutality against women. Seeing women being violent, the flipside of that is refreshing and oddly empowering."

I hate to use the word "real," but Waller-Bridge defines it so vividly. For example, during the same Andrew Marr interview, she talked about feeling like a "bad feminist" when writing certain storylines: "[Fleabag] says in the first series that she’d rather take two years off her life to have a hot body and all that kind of stuff. You’re not supposed to say those things."

Waller-Bridge: I — and thousands upon thousands of others — really hope you continue saying those things.