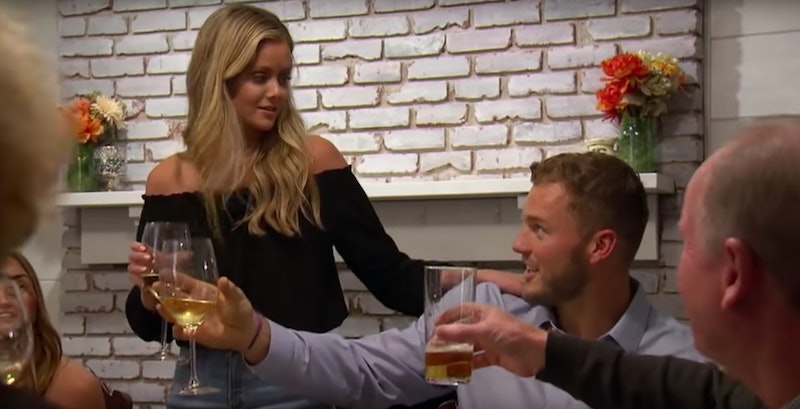 Now that one of the most dramatic seasons of The Bachelor to date is on its way out, fans are already getting antsy about which contestants from Colton's season they should expect to see on the sandy beaches of Mexico this summer. Many of them have already taken to social media to voice their predictions, and right now, it's unclear if Hannah G. and Bachelor in Paradise would be a good mix.

The franchise's fandom erupted when Colton's long anticipated fence jump occurred at the end of the two-part fantasy suite episode. For weeks, they've been wondering what — or who — could literally push Colton over the edge like that. And, it turns out, Cassie did. She admitted that although she had strong feelings for him, she couldn't "get there" in terms of engagement. She didn't want to commit to him and then break his heart, so she had to leave. That conversation ended up taking much more time than it was allotted, which left Hannah G. waiting in her fantasy suite, alone.

The finale will reveal what happened to Hannah's date and how Colton explained the night's events, if he did. Regardless, the situation was hard for Hannah to handle, and it was most certainly hard for her to watch Colton admit his exclusive love to another girl on national television. For those reasons, it might be too soon for her to sail on to Paradise.

After the fantasy suite episode aired, she shared an Instagram post with the caption, "well since we’re on the topic of fences... I’d jump a fence to not watch that episode again." She ended it with a broken heart emoji. Thanks to Colton, everyone knows what can happen when a contestant moves on to Paradise too quickly. Like Hannah, Colton was a part of Becca Kufrin's final three. He was in love with her, and then got his heart broken. And when he got to Paradise, which many people were shocked by, he was an emotional mess.

Unfortunately, it's likely that Hannah's heart will end up broken at the end of this season of The Bachelor, so it may be best for her to take some time away from the cameras before jumping back into the reality dating scene. However, she's known to be good friends with BiP alum Danielle Maltby, so if she has any questions or is considering going, she has a good point of reference.

Hannah G. and her quiet, reserved demeanor are relatively drama-free, which is why Colton had feelings for her. But it's a characteristic that, unfortunately, wouldn't fit as nicely in Paradise. Everyone knows that Paradise is where drama thrives. If you're not involved in it, you're not noticed. And if you're not noticed, you're at the risk of being sent home. The again, during her hometown date, she showed a side to her that viewers hadn't seen before by rapping at the dinner table. Maybe with a cocktail or two on the beach, she'd be able to loosen up on the beach.

Anything could happen. Thankfully, summer and official answers are right around the corner.