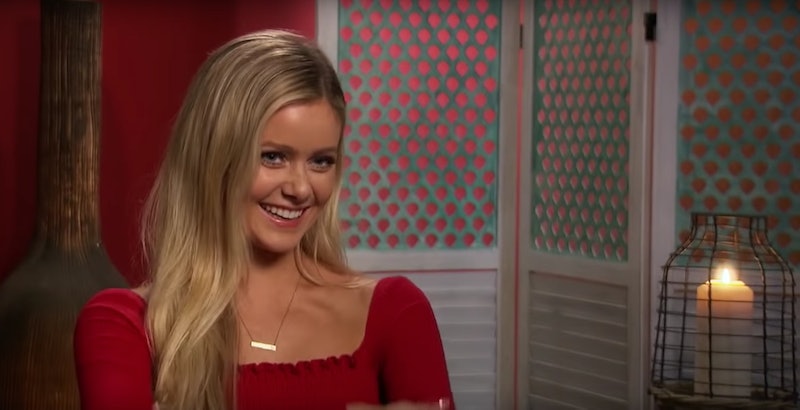 Now that Colton and Cassie have basically set this entire season of The Bachelor on fire, it's time to think about what's going to happen to the other two women still left in the competition. Tayshia and Hannah G. still think they're in the running to be with Colton in the end, but after the mayhem of last week, it seems unlikely that Colton will go back to either of them after confessing his love for Cassie on national television, and literally sprinting away when she didn't reciprocate. So will Hannah G. be the new Bachelorette? She might need an alternative path now that Colton has gone rogue.

There are a few signs that point to Hannah being a good Bachelorette. She has largely stayed out of the drama this season, and certainly hasn't been given an edit that paints her in any kind of bad light. She's also going to have a pretty convincing narrative if Colton breaks up with her and Tayshia before the final rose ceremony.

Becca Kufrin's entire Bachelorette narrative was largely built upon the idea that she'd been betrayed by Arie on The Bachelor, and it was her turn to take the wheel and get the happiness she deserves once and for all. Hannah G. could certainly seize upon the same kind of narrative, and she'd definitely have people behind her if she did so, especially since she was denied even a fantasy suite date.

Hannah G. also has connections to Bachelor Nation that precede her time with Colton. She's friends with Danielle Maltby, from Nick Viall's Bachelor season, and that could totally grant her an advantage if Danielle has in with producers.

Hannah fits with what The Bachelorette has been known, at times, to gun toward. She's sweet, beautiful, and incredibly inoffensive, and everyone can totally see her going from date to date, trying to choose her happily ever after. She's resonated with fans in a big way, and plenty are rooting for her to take up the franchise as its next lead.

But of course, there are a few things playing against Hannah G.'s chances. Tayshia's in nearly the exact same boat Hannah's in — even though she was able to spend a night with Colton, he could potentially be blindsiding her with an early breakup in the next episode. She's also a little older, has a little more life experience, and has a moving narrative of her own. She might be a more practical, and just as endearing, Bachelorette option.

Hannah also hasn't been shown to have the biggest personality, which begs the question of if she could carry an entire season on her shoulders. But we've only seen the snippets of Hannah G. that have made it to the final cut of the episode, so there's almost certainly more than meets the eye. And, honestly, The Bachelor franchise has never made having a loud personality a prerequisite, as we all know full well. That doesn't make Hannah G. any less worthy of a competitor for the spot.

Only time will tell who the next Bachelorette will be, but Hannah G. without a doubt as the viewer support needed to skyrocket her to the next season. And if all else fails, there's always Paradise.