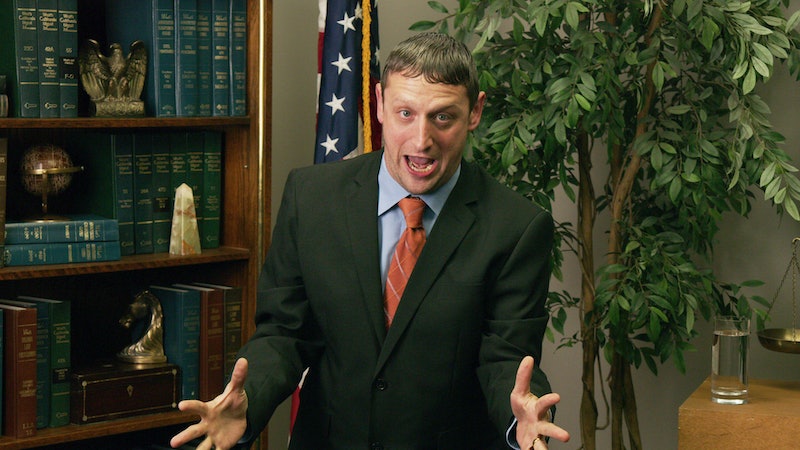 Netflix's I Think You Should Leave With Tim Robinson is a new, hilarious sketch comedy series like Saturday Night Live, but a bit more unhinged. Robinson, himself a former SNL writer, collected an impressive cast of funny friends including fellow SNL alums Will Forte, Vanessa Bayer, and Cecily Strong for the weird and wacky show. But with only six under-18-minute episodes, it makes for a quick watch. So if you already marathoned it, you're probably wondering if I Think You Should Leave will return for Season 2.

Update: On June 19, Netflix announced that it had renewed I Think You Should Leave for a second season. It will premiere in in late 2020, according to The Wrap.

Unfortunately, there's no word yet about whether or not it will be renewed, and knowing Netflix, that decision is probably a few months out. But there are plenty of other shows to keep you busy while you wait for news. The recently premiered Comedy Central series The New Negroes features musical sketches along with stand-up comedy and music performances; the trailer for the upcoming Comedy Central series Alternatino With Arturo Castro shows the Broad City star donning a number of costumes and wigs to play a wide range of characters in a variety of sketches; and HBO is even getting in on the sketch comedy action with Robin Thede and Issa Rae's recently ordered A Black Lady Sketch Show.

This all comes after a bit of a lull for sketch comedy shows. While just a few years ago series like Key & Peele and Inside Amy Schumer were making stars out of their titular performers, the number of sketch comedy shows on-air has sort of waned in the past few years — but I Think You Should Leave seems to signal a resurgence. If interest in sketch comedy continues to grow, it's all the more likely that Netflix will order a second season of the project.

Plus, I Think You Should Leave plays into another, more recent trend for streaming television: shorter episodes. Netflix shows like Love, Death, & Robots, Special, and the upcoming Bonding have all toyed with having shorter runtimes. Love Death & Robots episodes range from six minutes to 17, while episodes for both Special and Bonding last around 15 minutes. Network television shows generally have to stick to a half-hour or hour-long format, in part because of commercials, but the streaming boom allows a little more flexibility. And particularly in Special's case, more purposeful storytelling; every moment counts. I Think You Should Leave doesn't cover the same heavy material, but its short runtime makes it ideal to watch on public transit, while waiting for lunch, or in any other context where you may be in a rush or just want to kick back for a quick 15 minutes.