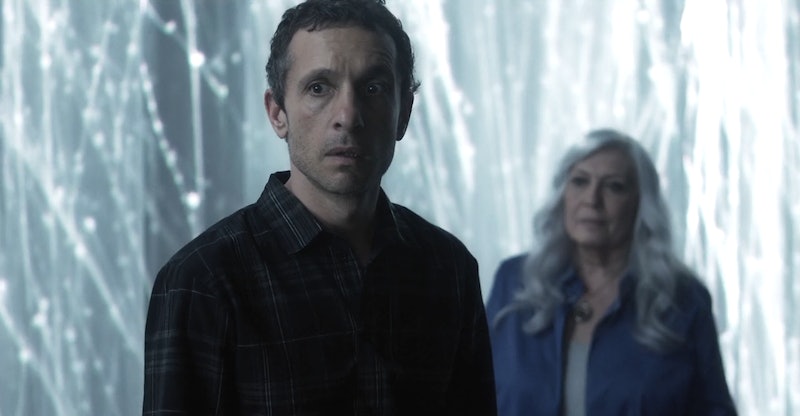 When someone dies in a tragic accident, people often wish they could go back in time to change the past. But what if you could do so by visiting another universe? That's the premise of Netflix's new Catalan-language series If I Hadn't Met You. The sci-fi romance is 10 episodes, but If I Hadn't Met You could return for Season 2. The series already aired in Spain in 2018 and Season 1 comes to Netflix on Friday, March 15. And while it hasn't been officially renewed in Spain, there's a very good possibility that the story could go on. After all, with multiple universes, the world of If I Hadn't Met You is wide open.

As the trailer shows, If I Hadn't Met You follows a man named Eduard after his wife and children die in a car accident. He initially considers taking his own life, but he's intercepted by Liz, who shows him that he can travel to parallel universes to give his family a different fate. The show has a large fantasy element, but it also seems to put a focus on human relationships and the love between Eduard and Isabel. It's definitely giving off some Fringe vibes, so whether you like sci-fi, romance, or are just an international TV buff, If I Hadn't Met You is for you.

Each of If I Hadn't Met You's 10 episodes are 50 minutes long, but it's difficult for English speakers to find out if there will be more to come after reaching the end. There's barely any information in English on the Catalan-language show, so a search using the original name that it has in Spain — Si No T'hagués Conegut — is necessary. Unless you happen to speak Catalan, you will need a translation service handy. The following intel about a potential Season 2 was obtained using Google Translate.

Series creator Sergi Belbel spoke to El Periódico when the first season wrapped filming in August 2018. Belbel is a playwright, and If I Hadn't Met You is based on a play he wrote with the same name. Belbel said he was open to a second season — depending on how the series was received — and that the story has the "potential to go further." He echoed this same Season 2 sentiment to the paper El País as well.

Si No T'hagués Conegut aired on channel TV3 in Spain from October to December 2018. After the Season 1 finale, the show's official Twitter account tweeted that it was the final chapter "so far." The series was popular in Spain, averaging about 300,000 viewers, per CCMA, and TV3 also noted how "shocking" the ending was. Plus, Pablo Derqui, who plays Eduard, recently won Best Actor at the Premis Zapping awards ceremony in Barcelona. So between the show's popularity, acclaim, and big Season 1 ending, a Season 2 could very well be on its way.

Unfortunately, there don't appear to be any official updates on the status of a second season since those August interviews with Belbel. But when American viewers get sucked into the story starting on March 15, go into it knowing there could be more universe-jumping for Eduard in the future.