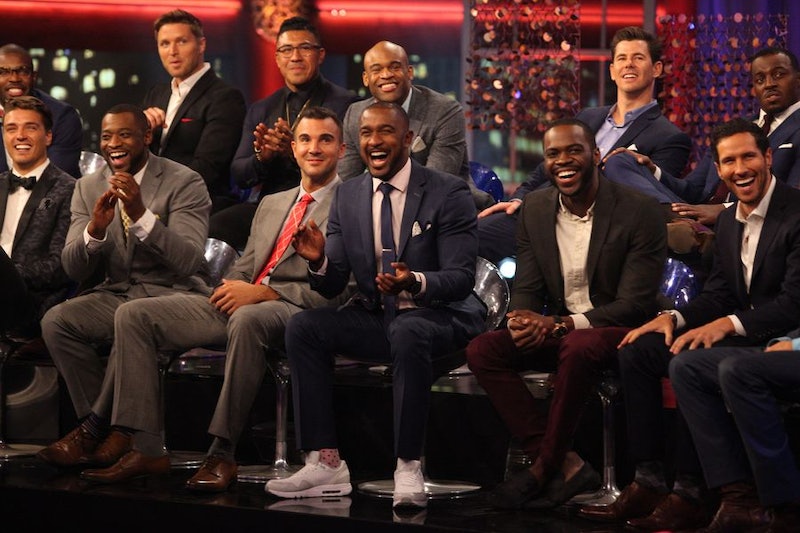 The Bachelorette's Men Tell All episode on July 31 was one of the most interesting episodes of the season so far and possibly in Men Tell All history. The episode addressed real issues like Lee's offensive tweets and showed actual dialogue about racism between Lee and the other men. There were real, productive conversations instead of just letting Lucas "whaboom" or having Jonathan tickle people for half the show. Sure, there were some silly antics too, like the traditional blooper reel. On top of all of that, the episode might have snuck in something else: the idea of Kenny as the next Bachelor.

The hosts of Bustle's Will You Accept This Podcast? brought up this possible hidden agenda in their latest episode, and it makes so much sense. Kenny got a lot of screen time during The Men Tell All and while it was partially due to the Lee drama, it was still a ton of time on-camera exposure for someone who came in eighth place. Also, the episode spent a lot of time painting him as one of the most lovable characters on the show. The Bachelorette producers brought out all the stops to show Kenny in the best light possible: America's sweetheart, Dean, said that everyone in the house loved Kenny. Kenny's adorable daughter was brought out and he cried on stage, which showed his sensitive side. And it was completely cleared up that Kenny didn't have "anger issues" in the situation with Lee.

There is still a lot of time between now and the premiere of the next Bachelor season, including a whole Bachelor in Paradise season, at the end of which is usually when the Bachelor is announced. There is no telling if America will remember much about the sensitive wrestler/single father is over the course of the BiP season. Remember last year when The Bachelorette's Luke Pell was expected to be the next Bacheler but was beat out last minute by Nick Viall's performance in Paradise?

The hosts of Will You Accept This Podcast? also brought up the point that choosing Kenny as the next Bachelor would mean passing up one of Rachel's top three for the role. (Or really, just Peter or Eric because Bryan is not as popular with fans.)

There is only one episode left in Rachel's journey to find love and all signs point to the next Bachelor not being announced during the After the Rose special; the announcement is typically made after Bachelor in Paradise wraps up (or during the season if you're Nick Viall). While the Bachelor announcement timeline is unsure, one thing we can count on is that once Rachel's winner is announced on Monday night we are going to be able to narrow down the potential Bachelor pool by one.

Be sure to tune into this week's episode of Bustle's Will You Accept This Podcast? to hear theories about Kenny's potential Bachelor status and so much more.