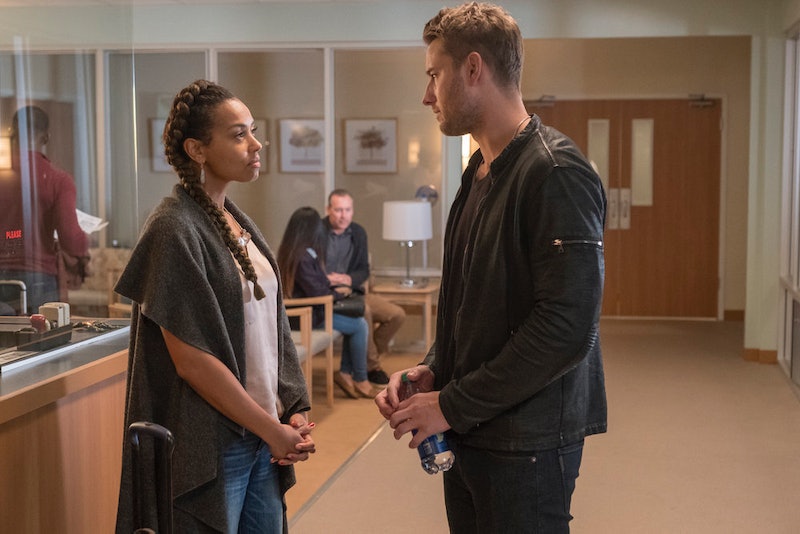 Spoilers ahead for the March 12 episode of This Is Us. When Kevin Pearson relapsed, everyone knew he had a long road ahead of him. He's dealt with alcoholism in the past, but at least this time he's got Zoe by his side, right? Well, even that was called into question on Tuesday night. It's unclear if Kevin and Zoe stay together on This Is Us, but if he wants any possibility of the relationship continuing, he's going to have to get his lying under control.

That's easier said than done for an addict — and viewers got a taste in this episode of just how effortlessly he's able to keep secrets from the people he loves. We learn that Toby already told the rest of the family that Kevin was drunk when Kate's water broke, so that messy reveal is out of the way. Kevin's whole family, and Zoe, are well aware of the situation when the episode begins. But it's assumed that Kevin is sober after spending hours in a hospital waiting room, until Zoe absentmindedly takes a sip of his water bottle and realizes it's filled with vodka.

She's clearly shocked and betrayed — but earlier in the episode she tells Beth that she wants to stay with him through the struggle. Will she continue that now that she knows Kevin is comfortable keeping secrets in plain view of her?

Zoe was aware of the fact that Kevin's struggled in the past, so this isn't a total blindside, though the constant lying definitely adds a new and difficult layer to their relationship. Zoe has also let Kevin in on some big secrets she carries herself, like the fact that she was abused by her father as a child. But still, Beth warned Kevin long ago that Zoe was a risk in her own way, so it's possible that issues could still arise on her end.

Melanie Liburd, who plays Zoe, addressed those past worries of Zoe's in an interview with Variety. Her comments make it sound like she'll be reluctant to let Kevin go, despite her history of running away.

"Whenever someone gets close — too intimate — Zoe runs because, to protect herself, she keeps people at a distance. Letting people in is her uncomfortable point, so it’s easy to be a bit promiscuous in her past, but she doesn’t want to do that anymore," she said in November. "The beautiful thing about [Kevin and Zoe’s] relationship is he’s pushed her to let him in, and she’s felt safer than she has in a long time — I don’t think she’s felt safe for a very, very long time."

Zoe would probably be reluctant to leave that safety she feels with Kevin, but also how safe can she feel moving forward when she knows he's lying? She'd be totally justified in leaving behind a toxic or dishonest partner, and no matter how much we all like to root for Kevin, that's exactly what he seems to be becoming.

If all goes well, Kevin gets a grip on his disease soon — his pain is valid and heartbreaking in its own way, and we know he's not a bad guy. But at the same time, his partner isn't obligated to stick around when he's going to lie to her and make her life more difficult, no matter how much she loves him. It's a hard situation no matter what, with no real villains regardless of how it turns out. Hopefully this couple manages to make it through without too much heartache on either end.