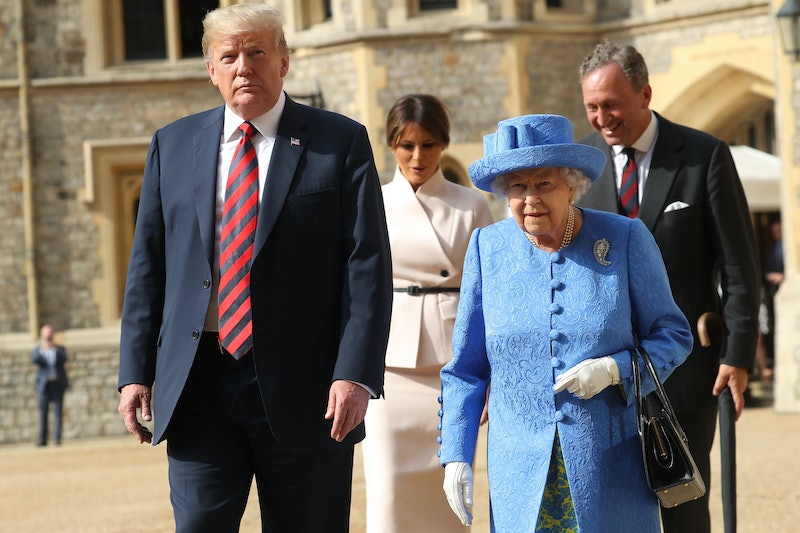 This is the first state visit of a United States president to the U.K. when there's actually an American member of the British royal family. Many people have been wondering, then, if Meghan Markle would meet president Donald Trump on his U.K. state visit. The schedule is out now, though, and the answer is settled — Markle will not be meeting with Trump during his busy time in the U.K.

While Elle reported that Trump will meet with Prince Harry, the Duke of Sussex, the Duchess of Sussex is sitting out the occasion because she's on maternity leave from her royal duties after giving birth to the couple's first child, Archie Harrison Mountbatten-Windsor. According to Elle, the Queen will host Trump and Melania Trump for three days total. The first couple will have lunch with Prince Charles, Camila Parker-Bowles, and Prince Harry, followed by a private tea with Prince William and Kate Middleton.

The visit will also include a meeting with British prime minister Theresa May before she resigns, according to Metro. And while the president will have all of his adult children in tow — including Donald Trump Jr., Ivanka Trump, Eric Trump, and Tiffany Trump, plus Ivanka and Eric's spouses Jared Kushner and Lara Trump — there's no word on which events they'll be joining in on.

Typically, the royals take about six months out of the public eye after giving birth, as Elle wrote — or at least, that's what Kate Middleton has done after the birth of each of her children. While Harry and Meghan have yet to confirm exactly how long Meghan will take with Archie, the decision not to come to a state event like this is totally normal.

Still, those who have traced Markle's journey from Suits actress to royal will not have forgotten what she said about Trump before she joined the royal family. She reportedly avoided Trump once at a television event once, and she called him "divisive" and "misogynistic" on The Nightly Show with Larry Wilmore. Members of the royal family, however, don't generally express their political leanings publicly, so Meghan hasn't made any recent comments about how she feels about the president.

The state visit will take place on June 3-5, and it's the first of Trump's presidency. He visited the U.K. in June 2018, raising eyebrows when he committed the etiquette faux pas of first making the Queen wait and then stepping out in front of her while the two walked together. The British people launched numerous protests of the president during his last visit, according to Politico, and these included a large balloon shaped like a Trump baby that flew over London.

So far, there's no word on what, if anything, the citizens of the U.K. are planning to do to welcome the American president and his family. It's a busy time in the country politically, what with May's upcoming resignation and the looming question of Brexit. Maybe they, like Markle, simply have other things that have to take priority at the moment.