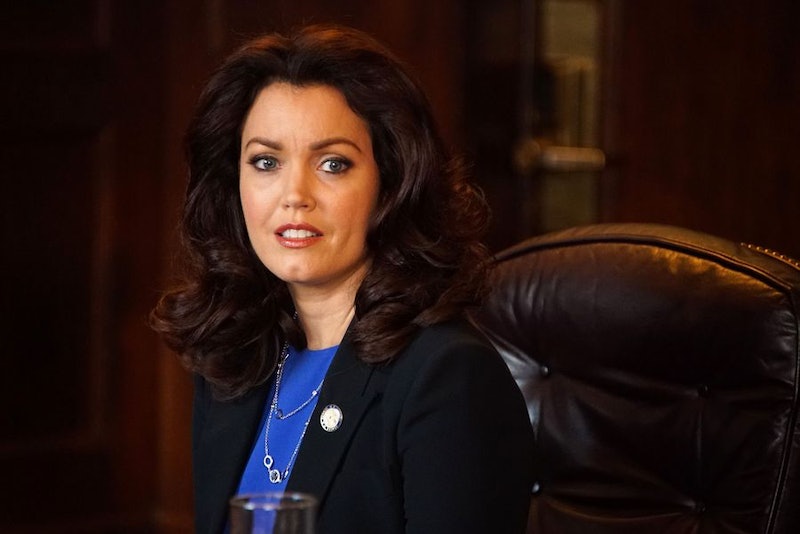 Mellie’s been separating from Washington, D.C. for some time on Scandal—sure, she ran for President of the United States, but I really think that was a last-ditch effort to hold onto the life she used to love with Fitz. But Mellie lost the race for the presidency to Frankie Vargas, and after drinking what was supposed to be celebratory champagne in the bathtub with Olivia, Mellie finally figured out what could be her next move—bailing. Will Mellie leave Washington, D.C. on Scandal? It may not be a bad idea.

Instead of her daddy’s hooch (aka how Mellie solved other problems), Mellie spent her time mulling over Vargas’ assassination and her loss by hanging out with her son, Teddy. When Olivia came in with news of Vargas’ death, Liv was ready to make a plan to take the presidency back, but Mellie didn’t want to hear it. She called the White House “cursed,” and she’s not wrong, at least not in her case—her marriage died there, her son died there, Fitz was shot there. It’s Mellie’s own Seattle Grace Mercy Death. Instead, Mellie said that she wanted to go to Santa Barbara, where she lived before Fitz became President, and spread herself across the beach. Hmm… the beach or the Oval Office? After eight years, I would choose the beach, too, Mellie.

But does Mellie really want to leave? Fitz gave her an out when he was trying to choose between her and Cyrus for the presidency, and Mellie said she still wanted to be President. But now that Fitz has chosen Cyrus, I guess Mellie is free to take Teddy and go. Personally, I think she should stay a little longer, since Olivia is very sure that Cyrus had Vargas killed and will probably do anything to prove it. Mellie may become President of the United States, like she wanted, after all. The beach will still be there in 8 years, Mellie.