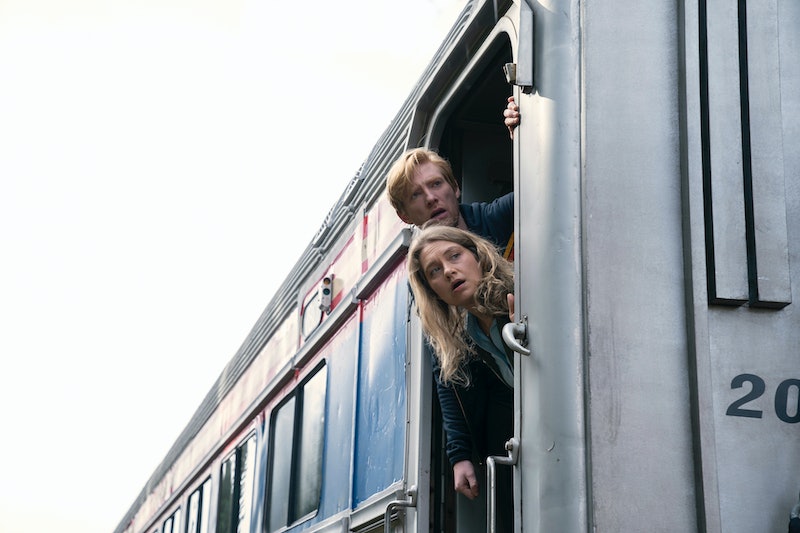 Update: HBO has canceled Run after one season, according to The Hollywood Reporter.

Earlier: HBO's new romantic thriller asks what happens at the end of the rom-com. Once the girl has run off with the boy into the sunset… what happens next? Well, that's a question that viewers will still be asking after the Run Season 1 finale, which provides few answers and leaves many doors open for future episodes. But will viewers ever get those answers? It's still unclear whether Run will return for Season 2 — HBO hasn't made an official renewal or cancellation announcement for the freshman series — but what is clear is that the writers are probably planning on a second season, given the way things left off.

The finale, "Trick," saw Ruby and Billy still scrambling in the wake of Fiona's shocking death. They managed to make it back onto their train, and when it became clear that the attendant didn't realize they'd ever left, they thought they had a perfect alibi. Too bad that Detective Cloud and Laurel (the oddest of odd couples) were hot on their trail, thanks to the jacket that Billy left behind in the bar.

Still, they might have gotten away with it — if only for a little while longer — if Ruby hadn't stumbled upon the truth behind the moment that kick-started the whole series. So why did Billy really text "Run" to Ruby after all those years? Originally, Billy passed off his impulsive message as a drunken moment of weakness. But it turns out it wasn't impulsive at all.

After making it back onto the train, Ruby finally decides she wants to watch Billy's self-help video. But as she's watching it, she's distracted by an incoming email that takes her to Billy's mailbox… where she finds a message from Fiona containing a video. That video turned out to be a pitch from Billy to his publisher, outlining his idea for his next book: he would text Ruby, get her to run away with him, and then chronicle their adventures across the country together.

The revelation that Billy had manipulated her into abandoning her family so he could write a book sends Ruby into a tailspin. She excuses herself, calls Detective Cloud, and pulls the train's emergency break so Cloud can make it onboard. Season 1 ends with Ruby disembarking the rain, reuniting with her family, and confronting Billy one last time. Knowing he's about to be arrested, he tries to convince her that everything that happened between her was real. He begs her to at least acknowledge that she knows he truly loves her before he's taken away to jail. She stares him down and turns her back, leaving Billy to his fate.

So what happens next? Does Billy get arrested, or is he able to evade Detective Cloud again? Can Ruby simply resume her quiet domestic life, or is her marriage too broken to salvage? Season 1 of Run showed what happens after the end of the happily-ever-after… but what happens after the end of the end? There are no true conclusions in life, only continuations. Unfortunately, fans will have to wait to find out whether there's a continuation in store for Run, or if this train has reached the end of its tracks.

More like this
Wait, Is 'Happy Valley' Not Actually Over?
By Darshita Goyal
Everything To Know About 'And Just Like That...' Season 2
By Jack Irvin and Grace Wehniainen
These Brooke Davis Quotes From 'One Tree Hill' Will Never Get Old
By Sabienna Bowman and Jack Irvin
'The Last Of Us' Episode Schedule Competes With The Super Bowl & Oscars
By Brad Witter
Get Even More From Bustle — Sign Up For The Newsletter
From hair trends to relationship advice, our daily newsletter has everything you need to sound like a person who’s on TikTok, even if you aren’t.