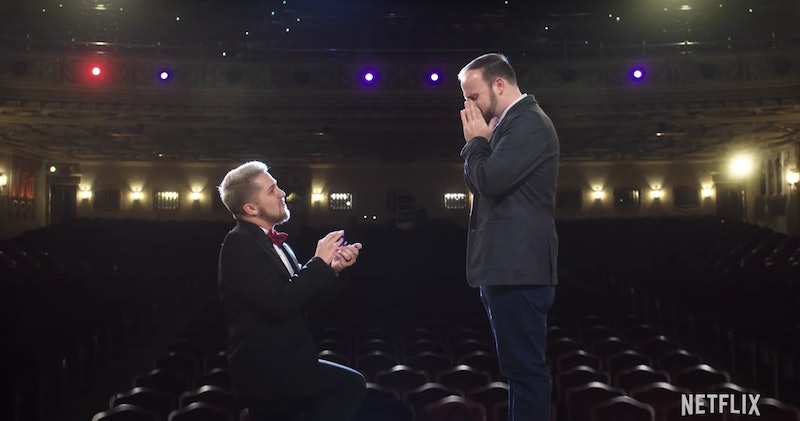 June is normally high season for wedding celebrations, but with much of America still under some form of pandemic-related lockdown, it didn't seem like there'd be many fun trips down the aisle (or anywhere else, for that matter) to enjoy. Enter Netflix with its latest reality show Say I Do. Once again the streaming giant has provided an online distraction also neatly filling a social void, as a team of three experts whip up a dream wedding in under a week for eight lucky couples. It's a formula that's easily replicable for infinite episodes, so will Say I Do return for Season 2 to ring more wedding bells? That all depends on what Netflix already has in the hopper.

Those of us unable to celebrate IRL weddings can voyeuristically enjoy Say I Do's delightful merger of Say Yes to the Dress-style wedding decisions and Queer Eye's feel-good makeovers (not a coincidence, as Say I Do comes from Queer Eye's producers). The experts are interior designer Jeremiah Brent (of HGTV show Nate & Jeremiah: Save My House), fashion designer Thai Nguyen, and chef Gabriele Bertaccini. The trio work with each couple to whip up a perfect ceremony, while helping navigate the obstacles that kept the couple from seeking bliss on their own.

So what does that mean for a second season of celebrations? Not that much at the moment — whether Say I Do returns any time soon for another round depends heavily at the moment on how far ahead Netflix planned pre-pandemic. The streaming channel's foresight served them well during quarantine — while other media giants like Paramount and Disney scrambled to rearrange film schedules and fill gaps in television programming, Netflix's original content has always had one home: its own streaming channel.

Not worrying about timing theater releases or hewing to traditional seasonal schedules left Netflix free to focus on content in denser chunks at their own pace, putting them currently at over a year ahead in terms of material. At an April 22 shareholders meeting, the company's chief content officer Ted Sarandos said, "Our 2020 slate of series and films are largely shot, and are in post-production stages in locations all over the world. And we’re actually pretty deep into our 2021 slate. We don’t anticipate moving the schedule around much, and certainly not in 2020.”

While there's no official word from Netflix on what that means for another season of Say I Do, based on their scheduling of other similar reality shows (like Queer Eye, for example), we likely won't hear anything about Season 2 of the show for at least half a year, if not longer. The upside is that additional show seasons usually follow a regular schedule of two a year, dropping in late winter/early spring and summer, respectively — Queer Eye dropped Season 1 in February 2018, Season 2 in June 2018, and Season 3 in March 2019, about half a year between each, with occasional specials released between. So for any fans who immediately say they do to Say I Do, it's probably best to enjoy what you have now instead of focusing on a long-term commitment.

More like this
Pete Davidson Pops Up In This Hidden Scene From The Kardashians Season Finale
By Jake Viswanath
Bachelor Nation's Blake Horstmann Is Dating 'Love Is Blind' Star Giannina Gibelli
By Jake Viswanath and Radhika Menon
Move Over, 'Sunset'! The Drama-Filled Trailer For 'Selling The OC' Is Here
By Nola Ojomu
Here’s Everything Coming To & Leaving Netflix In July
By Grace Wehniainen
Get Even More From Bustle — Sign Up For The Newsletter