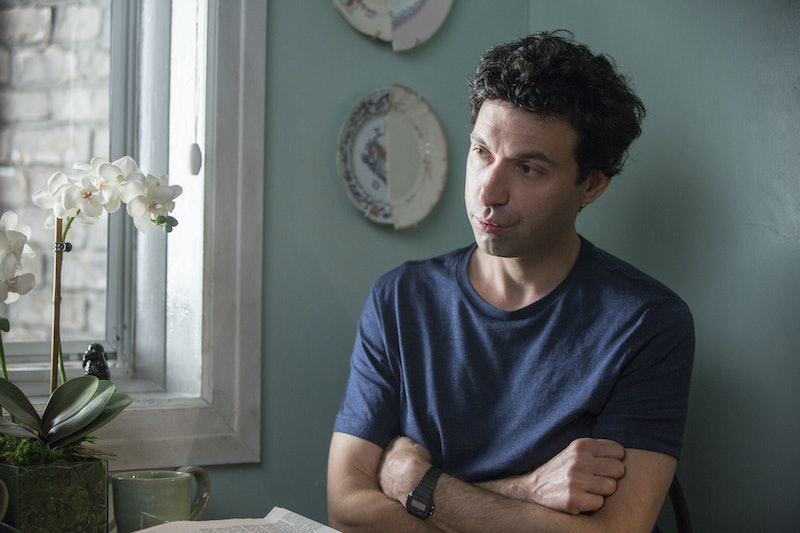 Whatever your feelings about Girls, you can't knock its honesty. The Lena Dunham-created dramedy offers candid peeks into the lives of a particular subset of 20-somethings, no matter how uncomfortable it may make its audience. The characters are aimless, self-indulgent, and unabashedly frank, and for most of them, that's OK. They're young and privileged, and they have time to figure things out. But Ray has always been a little bit different on Girls. He's older, but not wiser, and, despite the leg up his extra years have granted him, he has no idea what he wants. But, Girls Season 6 will change things for Ray, star Alex Karpovsky tells Bustle. He even hinted that Ray will have a new relationship outside the group of girls.

"There’s a big magnet that’s missing in his life that’s just not holding him in a certain direction. I think that’s one of the things he’s been grappling with over the seasons, and then he really turns a corner halfway through the season because of a very powerful incident," the actor hints. "It puts things in perspective and kind of says, 'Look, I have to really stop ignoring stuff and I have to try and figure this out.'”

He's vague about what that incident entails, aside from that it's a "traumatic event" that gives him a "jolt of mortality." But somehow, it's exactly what Ray needs.

It's interesting, because his character has always seemed most grounded. He's constantly striving for something new, something better, whether it be through fresh romances or recalibrated career paths. But, he's also always quitting. He can't hold down a job, a girlfriend, or even a home — in Season 2, he was sleeping in his car. Still, Ray seems perfectly capable. He's earnest, endearing, insightful — all traits his friends haven't yet seemed to grasp. So why can't Ray pull things together?

"Ray’s always been older than everyone else, and it’s not quite as OK [to be so lost] when you’re in your early to mid-30s. It starts to become for most people, especially for Ray, a source of real anxiety," Karpovsky says. "It’s one of the reasons he’s been hanging around with people 10 years younger than him. He’s immature in some ways and scared and confused. They’re doing it because it’s a rite of passage, a lot of people do that in their 20s, but he’s doing it because he’s got deeper issues. That’s sort of the struggle."

The people he surrounds himself with certainly haven't helped. When Season 6 picks up, he's working at his coffee shop, tip-toeing out of political office, and still with Marnie. Their romance has always been rather turbulent, but this time around it seems destined to combust, especially since she's still in the midst of a messy divorce from Desi.

"There are moments where [Ray and Marnie] really get each other — often when one of them is in a crisis — and then there are moments where their differences can’t be ignored," Karpovsky says. "I think that latter camp is what really begins to predominate the relationship to the point that someone has to say, 'Hey, what are we doing?'"

Lest Ray-Shoshanna 'shippers thinks that means there's a chance he'll get back with Shosh, Karpovsky says fans should make room for a new woman in Ray's life — and one that's actually outside his friend group.

In fact, it sounds like things for Ray may be coming together across the board. "I love Ray, and I want him to be happy and I want him to feel like he’s doing something with his life. And I feel like those basic criteria are met at the end of the run," Karpovsky says. 'He’s starting to see someone that seems hopeful and he’s also doing something creatively, artistically that seems cool and has genuine meaning and purpose behind it. It’s not a gimmick. So I’m happy about both of those things."

Girls has never been much for happy endings, but Ray's, at least, is one fans can get behind. He's spent five seasons playing the voice of reason for Hannah and her dysfunctional friend group. Now, he deserves a life of his own.