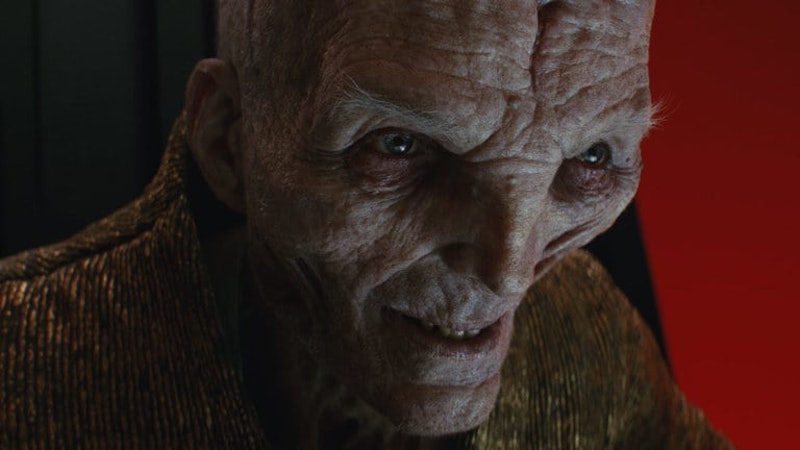 Star Wars is one of the most successful movie franchises of all time, and now the Galaxy Far, Far Away is looking to conquer TV, too. Disney+'s The Mandalorian is set to be the first ever live-action Star Wars television series, and fans are expecting the show to shed some light on the darkest corners of the Star Wars universe. And when it comes to the dark side of Star Wars, few characters come to mind more than Supreme Leader Snoke. So, will Snoke be in Disney+'s The Mandalorian?

Snoke was one of the most mysterious figures of 2015's The Force Awakens. The evil mastermind was the leader of the First Order, and it was Snoke who turned Ben Solo to the Dark Side, transforming him into Kylo Ren. Fans were hoping to learn more about Snoke in that film's sequel, The Last Jedi, but instead Snoke was murdered in the film by Kylo before much of anything was revealed about him (like, for instance, where he got his sweet gold robes). But with The Mandalorian, fans may get another chance to learn more about the Star Wars villain. That's because the new series takes place in the unexplored years between the fall of the Empire and the formation of the First Order, meaning the series could plausibly show Snoke's rise to power.

Jon Favreau, the creator of The Mandalorian, discussed how the series would explore the origins of the First Order in an interview with Entertainment Weekly. "What could happen in the 30 years between celebrating the defeat of the Empire and then the First Order? You come in on Episode VII, [the First Order are] not just starting out. They’re pretty far along," Favreau said. "So somehow, things weren’t necessarily managed as well as they could have been if [the galaxy] ended up in hot water again like that."

It was also revealed in a recent New York Times article that the very first episode of The Mandalorian will feature a Star Wars universe spoiler. That spoiler could be practically anything — maybe even something involving Snoke. If The Mandalorian did reveal some secrets regarding the background of one of the franchise's most enigmatic characters, it would likely serve to generate even more buzz about the series among the Star Wars faithful.

The dual revelations of a big spoiler and an impending exploration of the rise of the First Order in the series could both potentially point to Snoke's presence in The Mandalorian. The Supreme Leader was surely instrumental in the formation of the First Order, and finding out pretty much anything about his über mysterious past would have to be considered a massive spoiler at this point. But although a Snoke cameo in The Mandalorian may make sense, that doesn't necessarily mean it will happen.

Disney has kept most details of The Mandalorian under wraps, and no concrete plot details have been released. The series is sure to offer up lots of surprises for fans, but whether or not Snoke is among those surprises will remain a mystery until the show premieres Nov. 12 on Disney+.

More like this
Netflix Shut Down 'Bridgerton' S3 Rumours About A “Very Dark” Storyline
By Bustle
'The Queen’s Gambit' Season 2 Tweet Wasn’t From Anya Taylor-Joy
By Mary Kate McGrath, Jack Irvin and Grace Wehniainen
'The Last Of Us' Has Officially Been Renewed For Season 2
By Darshita Goyal
'Boiling Point's TV Sequel Is Set To Deliver A “Rollercoaster Of Emotions”
By Catharina Cheung and Sophie McEvoy
Get Even More From Bustle — Sign Up For The Newsletter
From hair trends to relationship advice, our daily newsletter has everything you need to sound like a person who’s on TikTok, even if you aren’t.