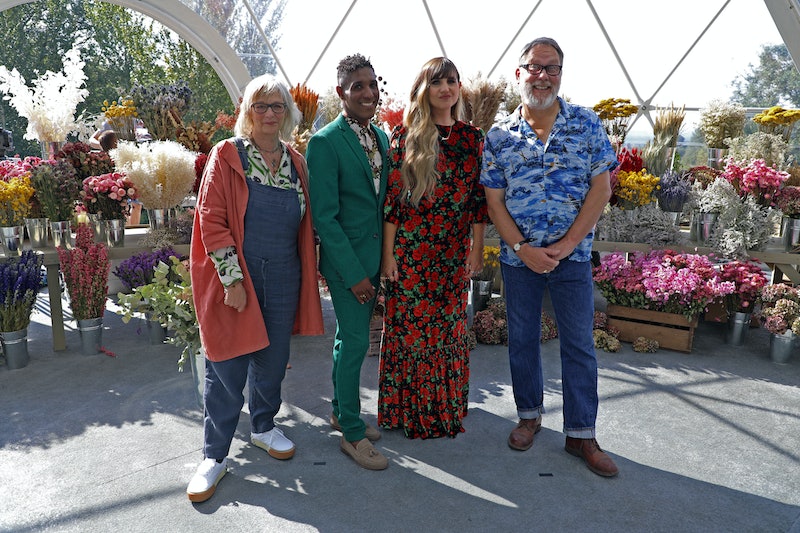 There is something indescribably special about The Great British Bake Off, or as it's known on Netflix in the U.S., The Great British Baking Show. The series' combination of likable contestants, amiable hosts, knowledgeable judges, and dramatic — but not too dramatic — competition make it a standout, and it's one of the most successful competitive reality series ever created. So it's no wonder that fans are so excited to watch the seemingly similar series, The Big Flower Fight. The show is unproven so far, but if fans are as eager to watch contestants make floral arrangements as they are cook baked goods, then fans shouldn't be surprised to see The Big Flower Fight return for Season 2.

The new series borrows a lot from The Great British Bake Off. Humorous hosts? Check. Charming judges who know their stuff and who care about the contestants? Got 'em. A picturesque mono-location in the British countryside? The show sees your tent and raises you a glass-covered geodesic dome. The Big Flower Fight even enters the uncanny valley with some of its GBBO-esque touches, as its title, music, distinctive drawings, and format are all nearly identical to Bake Off but are off by just a hair. The Big Flower Fight in fact feels like a spinoff of its popular progenitor, but it's actually unrelated... outside of the the obvious influence that GBBO had on its inception.

As The Big Flower Fight is just starting its first season, it remains to be seen whether or not it will become a hit like GBBO. Bake Off has been a mainstay on British television for a decade now, and it remains one of the nation's most popular shows. It's also become a big enough hit in the U.S. that last year Netflix struck a deal with GBBO's network, Channel 4, that allows the streaming site to air new episodes of the series weekly just a few days after they premiere in the UK.

More like this
Everything To Know About A Potential 'Bling Empire: New York' Season 2
By Gretchen Smail
'Love Is Blind: After The Altar' Season 3 Has A Release Date & It's Very Soon
By Grace Wehniainen
The 'Freeridge' Cast Shared Their Hopes For A Potential Season 2
By Grace Wehniainen
Netflix Shut Down 'Bridgerton' S3 Rumours About A “Very Dark” Storyline
By Bustle
Get Even More From Bustle — Sign Up For The Newsletter
From hair trends to relationship advice, our daily newsletter has everything you need to sound like a person who’s on TikTok, even if you aren’t.