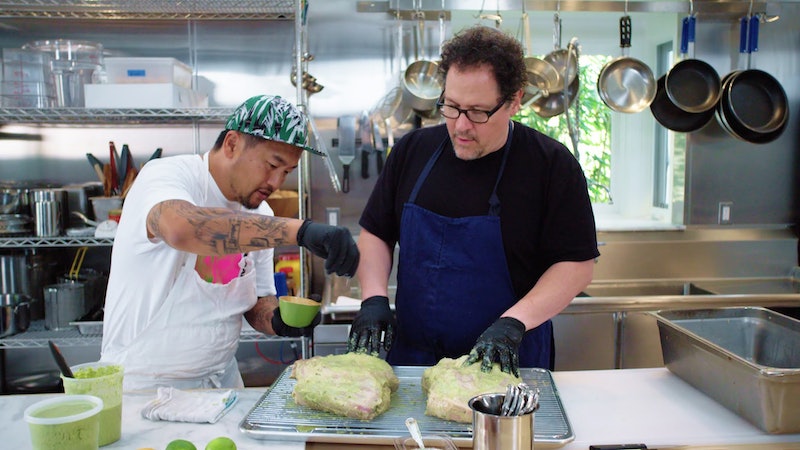 Jon Favreau and chef Roy Choi have been cooking up a storm for three seasons now on Netflix, so fans can only hope that The Chef Show might return for Season 4. The third season just started streaming on Wednesday, Feb. 19, so it may be too soon to say whether or not another season of The Chef Show is on its way. But, one thing that remains certain: how much Favreau loves the show. And as long as he loves doing it, who's to say he won't continue?

Ever since Favreau and Choi first met while filming 2014's Chef, the two formed a solid bond. From that moment, both knew they wanted to continue working together somehow. "It was such a fulfilling experience," Favreau told TV Insider in June 2019 about working with Choi on Chef. "I wanted to continue exploring this world." And Choi felt the same way." In a May 2019 statement obtained by Deadline, he added that the show was like a dream come true, saying, "And through this friendship I found my cooking soulmate and a child's dream is now a reality."

In the show, Favreau and Choi explore the world of cuisine. Fans watch them cook with special guests, and sometimes even introduce some famous celebs to new foods. There are many well-known stars and culinary professionals who have joined them in the kitchen, including Gwyneth Paltrow, Robert Downey Jr., Tom Holland, and Seth Rogen, to name a few.

As much as Choi and Favreau like cooking side by side — and for Netflix — it's unclear if The Chef Show will come back for another season. It's especially hard to say when Favreau would find enough free time to make the show. He's currently busy working on the second season of Disney+'s The Mandalorian. And if Baby Yoda demands more time from the filmmaker, that could mean a pause on more Chef Show.