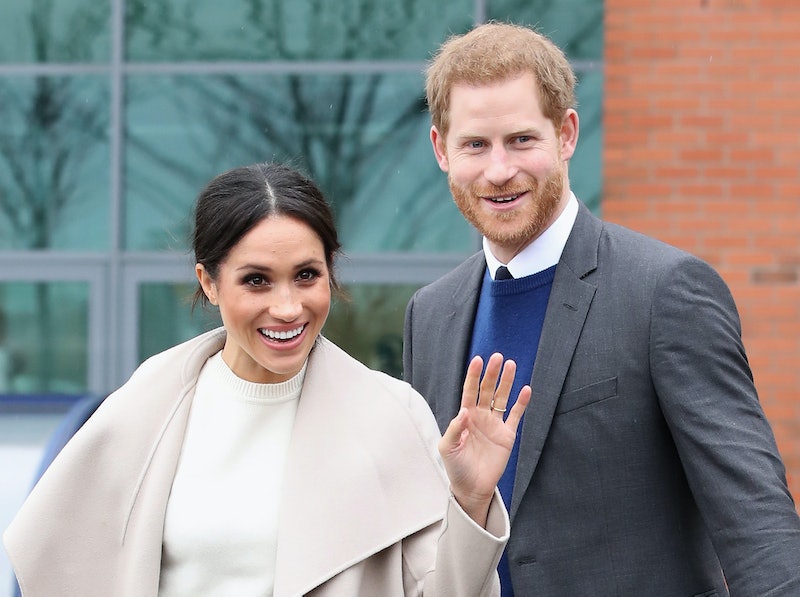 The British Royal Family has a lot going on this spring. Between the latest royal baby news to Prince Harry and Meghan Markle's wedding, the family will be busy with the fun celebrations. Now that the newest member of the royal crew is here, the question now is: Will the new royal baby be at Harry and Meghan's wedding? The rest of the Cambridges are set to attend the festivities.

Sorry to disappoint anyone hoping to catch another glimpse of the newest addition to the Duke and Duchess of Cambridge's family, but it's unlikely that the little one will be at Harry and Markle's wedding. It's mostly because newborns don't typically attend high-profile events of this nature. Peter Phillips, the son of Princess Anne and Harry's cousin, welcomed a daughter, Savannah, with his wife Autumn in December of 2010, four months prior to William and Catherine's wedding, per The Royal Forums. Yet, their little one didn't show up at the pair's April 2011 nuptials. Given this precedent, and the fact that children who aren't in the wedding party have rarely attended royal weddings, as royal historian Carolyn Harris told Express, it's unlikely that the baby boy will show up at the highly anticipated event.

In case you missed the joyous news, William and Catherine welcomed their third child into the world on Monday, April 23. Since the pair appeared in front of the St. Mary's hospital with children George and Charlotte after their births, the world is eagerly awaiting the first glimpse of the newborn, whose name has yet to be announced.

While it's unlikely that the new prince will attend Harry and Markle's wedding, it's likely that the newborn's siblings will be involved in the ceremony in some fashion. Even though it hasn't been confirmed yet, George is expected to be a page boy and Charlotte is said to be a flower girl during the wedding, according to ABC News.

Seeing as though both royal children were in the wedding party of Pippa Middleton, Catherine's sister, one can probably anticipate the youngsters in their uncle's wedding party, too.

The duchess' pregnancy was previously announced via Kensington Palace's Twitter account back in September 2017. They later confirmed on social media that the Cambridges would welcome their third child sometime in April 2018, but didn't reveal any further details. The news that the baby boy was born on Monday undoubtedly delighted every royal watcher out there. And the royal excitement isn't going to stop there.

Of course, Harry and Markle's May 19 wedding, one of the most anticipated events of the year, is almost here. Since the special day is fast approaching, Kensington Palace has revealed more and more details about the event. And based on some of the info they've released thus far, the happy couple are in store for a fabulous wedding.

On March 20, the Palace revealed what kind of cake the couple are going to enjoy in a series of tweets. They first said that Claire Ptak, owner of Violet Cakes in London and a California native like Markle, will make the treat. Harry and Markle's cake will be a little different than your typical chocolate and vanilla fare; they're having a lemon elderflower cake. Talk about delicious!

Kensington Palace also let fans in on what kind of flower arrangements will be at the event on April 1. Phillipa Craddock will create the church flowers and the floral displays with be locally sourced. Some of the flowers that you might see will be white garden roses, peonies, and foxgloves, which all bloom naturally in May.

While you'll be able to see all of this fun fare at the royal wedding, don't be shocked if you don't see the newest addition to the royal family at the event.