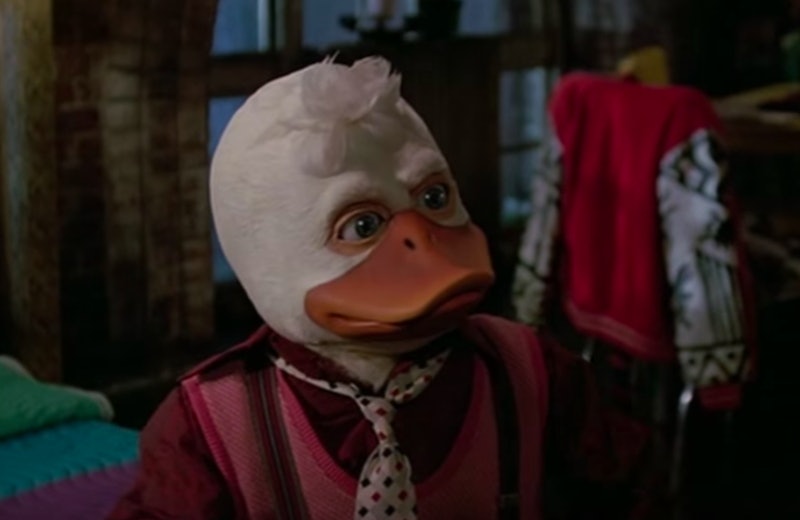 Universal Pictures
By Olivia Truffaut-Wong
May 5, 2017

Howard the Duck is flying back into theaters. Well, he doesn't actually do any flying. In fact, he's barely on screen. Guardians of the Galaxy Vol. 2 brings Howard the Duck back for a cameo, making this the character's second appearance in the Marvel Cinematic Universe (MCU). With two MCU movies under his belt, will there be a Howard the Duck movie? Or will Howard the Duck suffer the same fate as beloved repeat MCU cameo performer Nick Fury and stay in the supporting cast forever?

Like his appearance in the Guardians of the Galaxy post-credits scene, Howard the Duck's Guardians of the Galaxy Vol. 2 cameo doesn't really serve a function in the plot, and it's not exactly what one might think of as the birth of a spinoff. True to form, Howard the Duck mostly appears just for laughs — spoiler alert. In GotG 2, Howard the Duck is enjoying his newfound freedom from the Collector, seen sipping a drink on the planet Contraxia and trying to pick up ladies. "You're out of luck until you've got duck," he says, using one of the character's classic pick-up lines. (Whether or not it works is left to your imagination.)

Howard the Duck doesn't appear again until the credits, where he is shown right beside the Guardians, suggesting the possibility of a larger role. Marvel Studios President Kevin Feige even teased the possibility at a recent press conference. "You know, the fun thing about Howard is he shows up where you least expect him," Feige said via RadioTimes. "So, like, who knows where he's going to appear next?" Granted, there is a common factor when it comes to when and where Howard the Duck has been featured in the MCU, and that's writer-director James Gunn. Gunn, who directed both Guardians films, is a huge Howard the Duck fan, and if anyone at Marvel were to make a Howard the Duck movie, it would be him.

And that doesn't even begin to cover the public reception, particularly from fans who have been waiting years for movies from actual characters like Black Widow. Can Marvel justify making a movie about a talking duck before having more than one female superhero lead? I don't think so, but that's also not for me to decide.

So, no, a Howard the Duck movie probably isn't going to happen any time soon. However, given the fan reaction to his presence in the Guardians franchise, it's possible he might return in a bigger way for Guardians of the Galaxy Vol. 3. Gunn recently confirmed that he would be writing and directing the third film in this trilogy, and he teased in a Facebook post that the third film would "conclude the story of this iteration of the Guardians of the Galaxy." It seems to me that the closest thing fans might get to a Howard the Duck movie is a Guardians movie starring Howard the Duck. Personally, I'm OK with that.