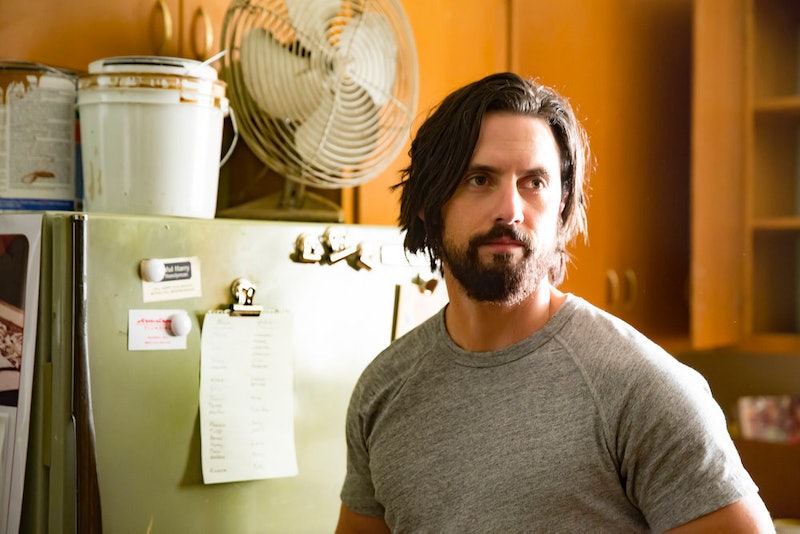 NBC's new hit drama has been slow to dole out information about the fate of family patriarch Jack Pearson. It's the moment viewers are simultaneously dreading and anticipating: when will This Is Us show us Jack's death? It took us 13 whole episodes to learn that A) he and Rebecca were no longer married in the present day, B) he had passed away, and C) his kids were teenagers when he died. But we still don't know how it happened — and although that particular revelation may finally be forthcoming, fans will probably be waiting a long time to see it actually play out on the show itself. (Thank goodness.)

In the most recent episode, "Three Sentences," we got our first glimpse of Jack's funeral, which confirmed the relatively young ages of Kevin, Kate, and Randall when he passed. But don't expect that reveal to lead to a sudden avalanche of details about Jack's death. Creator Dan Fogelman explained that the story of the Pearson father's demise would be doled out piece by piece over the course of many seasons, as Vulture reported from the show's panel at the Television Critics Association press tour last month.

"There’s a before and after to this family," Fogelman said at the panel. "Before Jack, and after. There’s a hinge in this family, and that will be really interesting to show where that hinge was." He teased that viewers would soon learn the when of Jack's fate (which we did), "And then, much later, how, and later you’ll see it [happen]."

Given that This Is Us was renewed for two more seasons a couple of weeks ago, could we be waiting as long as two years for more intel on Jack's demise? Thankfully, Fogelman won't be keeping us in suspense quite that long. "By the end of the season, you’re going to know a lot of the details of the how and the ramifications of it," the showrunner told Entertainment Weekly in an interview after the most recent revelatory episode. "In terms of the detail of how he died, was it illness? Was it something tragic? Was it something else? You’re not going to know that for a little bit because we want to show that in the show. So that’s going to take a minute."

Although This Is Us has, like Parenthood before it, been notorious for being a tear-jerking show in a happy, cathartic way, Fogelman also warned EW that his show was about to take a turn towards the darker side of life:

"The back half of the season — it’s heavy, and it’s not just heavy on an emotional level. It’s dark, and there’s some darkness that creeps into the show because that’s what happens in life. We’re not trying to be edgy or cool, but perfect people act imperfectly. A wonderful marriage faces serious tests. People get sick and die. So we can’t just do a show where every week is this kind of emotional but very safe release. We also have to dive into the heavy stuff. So [in] the back half of the season, people are going to have to put on their seat belts a little bit. I just wrote the finale today and… it’s a doozy."

It's no surprise that things are about to get dark, considering the fact that Fogelman based this storyline partly on the death of his own mother. "What I’ve referenced in our writers’ room a lot is my mom died very suddenly and very tragically. I’m not saying that’s what happened to Jack, but I’m just saying it was obviously a very affecting thing in my life," he told EW. "For me, personally — and all I go by is my own experience — I have a hard time even to this day talking about the how and the when of it. It’s not something I’m real capable of getting into, and I went briefly to therapy. It’s just something that’s kind of locked unhealthily away. I think that’s the case with a lot of the family, and we’ve seen that, hopefully. We’re not just pulling this out of our ass in the 13th episode. We’ve seen this in bits and pieces with this family. So, there’s a long journey for the audience to go on, still."

Although the journey might be a long one, audiences should be taking the next step relatively soon. Considering there are only five episodes left in the show's 18-episode first season, we should be getting those hints about the how of Jack's death in the very near future. Just make sure you have some Kleenex handy.