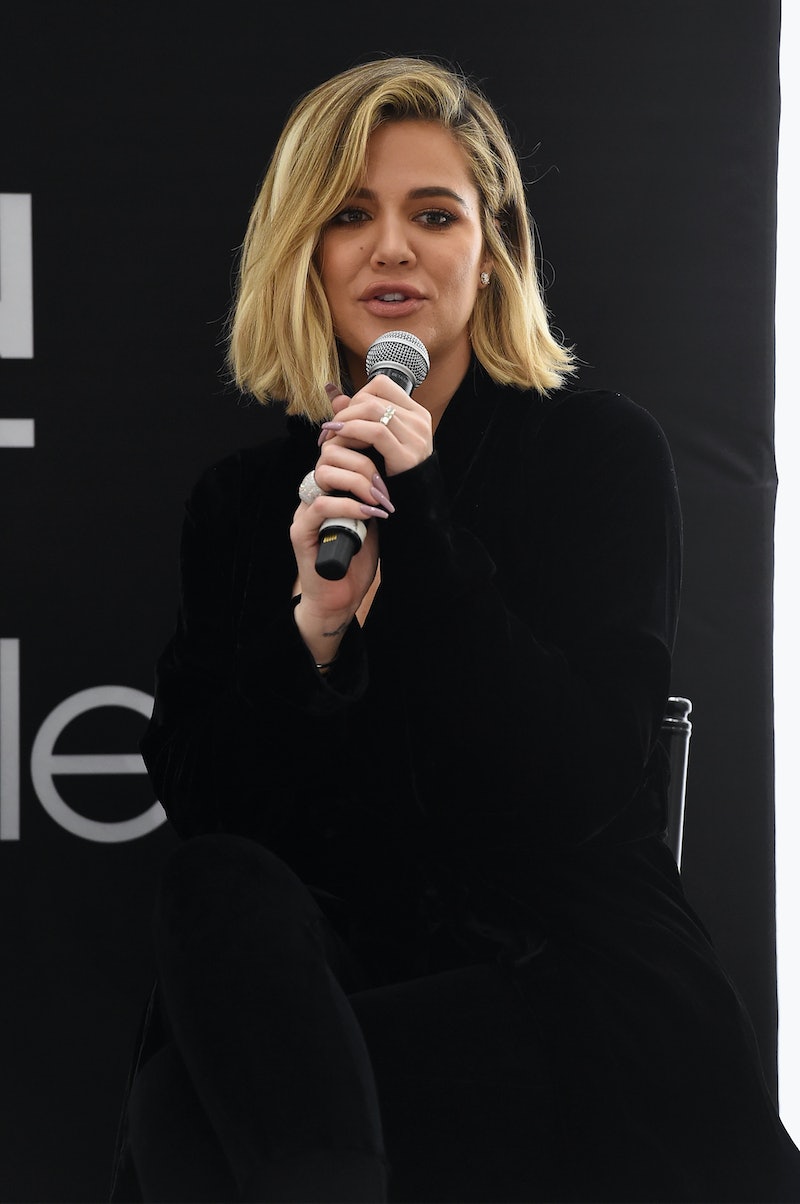 There may be a wedding in the Kardashian family's future... eventually, that is. As People noted, Tristan Thompson said he would marry Khloé Kardashian eventually on the Oct. 7 episode of Keeping Up With the Kardashians. So, could the new parents take the next step in their relationship sometime in the future?

During a conversation with Kris Jenner, the Cleveland Cavaliers player asked her for suggestions for a push present that he was going to give to his girlfriend to celebrate the birth of their child (this episode took place before Kardashian would welcome their daughter, True Thompson, in April). He said, "I remember Koko saying she wanted something where she could pass it down, generation after generation."

Jenner had a very particular suggestion in mind. “You know, Corey [Gamble] bought me for Christmas a couple of years ago this really beautiful little diamond ring that you could put on any finger,” she said, "You know, until you get that really huge diamond that’s going to go on on her ring finger!”

Thompson replied with, "Of course," and then added, "Eventually." So, you heard it first on KUWTK, the pair might find themselves engaged in the future. Although, that depends on how you take that winning "Eventually" reply.

Interestingly enough, it was recently reported that an engagement might actually be in the cards for Kardashian and Thompson. In an Us Weekly report published on Sept. 4, an source revealed to that publication that, "Khloé and Tristan are doing better than anyone could have expected," despite the very public cheating scandal they went through in April. (At the time of the cheating allegations, Bustle reached out to reps for Thompson and Kardashian, but did not hear back.) The source also related that the couple is reportedly discussing an engagement. So, it's possible that they could exchange vows sooner than anyone thinks.

While marriage could be the next step they take in their relationship, they also might not be in too much of a rush to head down the aisle. In Kardashian's interview with The Mail on Sunday's YOU magazine from August 2017, she opened up about the marriage topic. "I’m in the best relationship I’ve ever been in and it doesn’t take a ring for me to feel that way," she said, referencing her relationship with Thompson. She continued to say that marriage isn't exactly off of the table, but that it's not going to be the be-all and end-all for any of her romantic relationships:

"I believe in marriage and I want to be married again one day but I don’t have a time frame. Why do people think that marriage equates to happiness? There are a lot of people in unhealthy marriages.”

Of course, no matter whether they get married or not, they did just take a major step in their relationship recently. In April, they welcomed their daughter, True, into the world. As of right now, it could just be that the parents are taking some time to focus on the new addition to their family, with any marriage plans on the back burner. But, you never know. Fans will just have to keep up with Kardashian and Thompson to see if there will eventually be a wedding in their future.