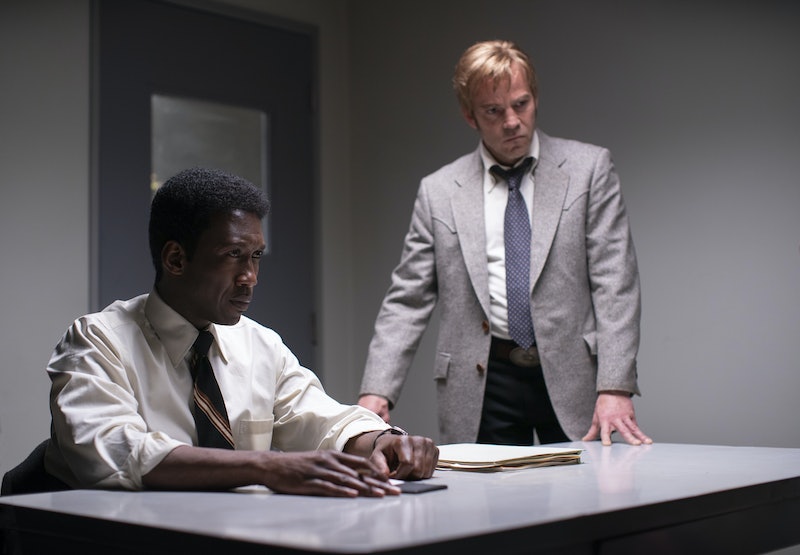 With the season finale of True Detective Season 3 on Feb. 24, viewers may finally find out what happened to Julie Purcell. After that, the future of the anthology series is just as big of a mystery since HBO hasn't announced if True Detective will return for Season 4. Thanks to the show's return to form after Season 2 — due to a far more well-written story and Mahershala Ali's tremendous performance — fans want to see what else creator Nic Pizzolatto has in mind. While he keeps the secrets of his HBO series close to the vest, Pizzolatto has already revealed that he has an idea for a fourth installment.

The third season has managed to follow the disappearance of Julie in three different timelines and keep the intrigue level up while exploring the impact this crime has had on Ali's Detective Wayne Hays, who suffers from Alzheimer's disease in the year 2015. So while there's a possibility that the Season 3 finale could disappoint, that doesn't seem too likely — nor would it necessarily dull the excitement about a potential Season 4.

Ahead of the Season 3 premiere in January, Pizzolatto spoke to Entertainment Weekly about the possibility of a Season 4. While he noted he wouldn't mind working on a series where he didn't "have to reinvent the wheel every time," he did admit that he already has a "wild" idea for a fourth season. He wondered about there the show could even go after a season with three timelines in which the mystery had to unfold with "complicated structural elements."

Still, Pizzolatto isn't fazed by the challenge. "I have an idea that's kind of crazy. I think it needs to percolate for a while. I was looking to do another series, maybe a movie, in the meantime, but yeah. I have an idea," he promised in the same interview.

Based on a recent interview from the president of programming at HBO, Casey Bloys, it sure seems that Pizzolatto will be allowed to keep going. Bloys spoke to Deadline after the fifth episode of True Detective Season 3 aired and he only had positive things to say. "Creatively, ratings-wise, it did everything that we wanted it to do," Bloys told Deadline. "It's up to 8 million viewers an episode, we were thrilled with the review, I think fans have really liked it. Obviously acting is superb. I was very, very, very happy with all aspects of it."

As for a Season 4, Bloys seemed to leave the ball in Pizzolatto's creative court. "I think we are going to handle it the same way as the last one — if Nic has an idea that he is excited about, we will talk about it but not rushing into anything," Bloys said. "I think Nic is enjoying the current success of the show and maybe has something percolating but nothing has come to us yet."

This "percolating" idea that Pizzolatto has for a Season 4 is certainly intriguing. But first, viewers will have to see how Season 3 ends. The director of the Season 3 finale, Daniel Sackheim, told Collider how "Now Am Found" is "one of the most satisfying finales that I've been involved with." He also promised that "it will become really clear" whether or not the crimes in Season 3 are connected to the crimes from Season 1.

So before you can get a Season 4, sit back and enjoy the ending of Season 3. Once you're finished, flip over to the Oscars where Ali will most likely be celebrating winning another Academy Award. And then spend the rest of your time waiting for the Season 4 announcement by coming up with unexpected dream casting for the very-likely next installment of True Detective.