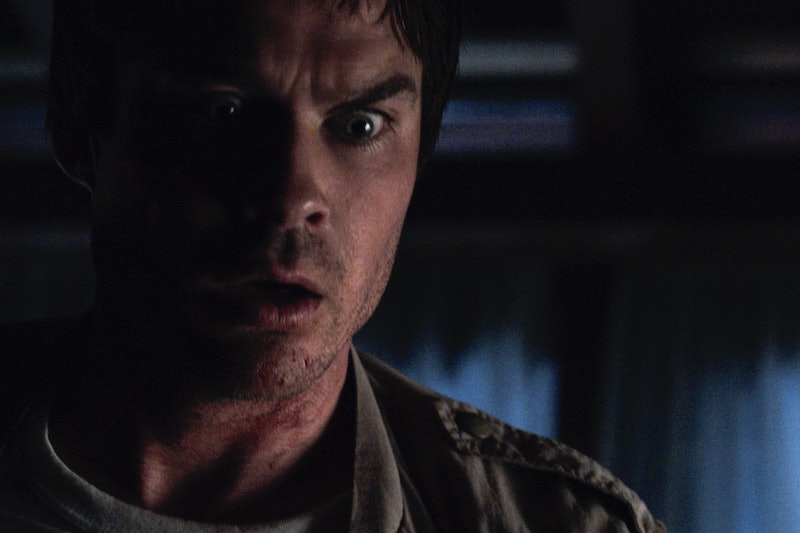 Update: According to The Hollywood Reporter, Netflix has canceled V Wars after one season.

Earlier: Though Netflix has yet to announce if V Wars will return for Season 2, considering star Ian Somerhalder's previous success with vampire shows, it has a biting — er, fighting — chance. He previously played vampire Damon Salvatore for eight seasons on The CW's Vampire Diaries, but V Wars allows him to explore a different side of the genre. Whereas Vampire Diaries leaned into romance, V Wars veers more sci-fi, portraying vampirism as a global health crisis on the verge of starting a war.

"I love this genre. It has been very good to me," Somerhalder told Entertainment Weekly of doing another vampire show. "But also, it's so unique. It's so vast. There's so much you can do with it."

This time, Somerhalder is on the opposite side of the brewing battle between humans and vampires. He plays human scientist Dr. Luther Swann, who is researching the vampire outbreak. Complicating matters is the fact that his best friend Michael Fayne has been infected with the virus, which in this universe makes vampires just as diverse as humans. "When this attacks your DNA, different vampires from different parts of the world turn differently," Somerhalder told EW. "They have different feeding habits, they have different looks, different feeding methods, all of it's different."

With possibly billions of people turning into vampires, Somerhalder said the show is able to explore broader societal issues in addition to the genre's usual blood and gore. "What happens when they have their own clubs and their own streets and their own neighborhoods, different cultures, and they could have even have their own racism within their species?" he said. "All the different types of creatures don't actually get along, and we get to really play a lot of social nuances without bludgeoning people over the head, and that's what's cool."

It's unclear how much of Jonathan Maberry's 11-issue graphic novel, upon which V Wars is based, the first season covers, but as an executive producer and director on the show, Somerhalder is committed to the project. Plus, it doesn't hurt that his wife Nikki Reed also has a role — and that the series has already received Maberry's stamp of approval. "The fact that [Mayberry] loves the show is a huge compliment. The fact that we did right by him is such a great feeling in itself," Adrian Holmes, who plays Dr. Swann's vampire buddy Michael, told CinemaBlend.

Now, all V Wars needs to do is win over viewers in order to secure a Season 2 renewal from Netflix.

More like this
'Bridgerton' S3 Teases Exciting Social Season For Penelope Featherington
By Bustle
This 'Black Panther' Character Is Starring In Her Own Marvel Show Next Year
By Grace Wehniainen
The First Trailer For 'That '90s Show' Includes So Many Nods To The Original Series
By Jack Irvin, Alyssa Lapid and Grace Wehniainen
'Wakanda Forever' Is Already Opening Doors For Mabel Cadena
By Grace Wehniainen
Get Even More From Bustle — Sign Up For The Newsletter