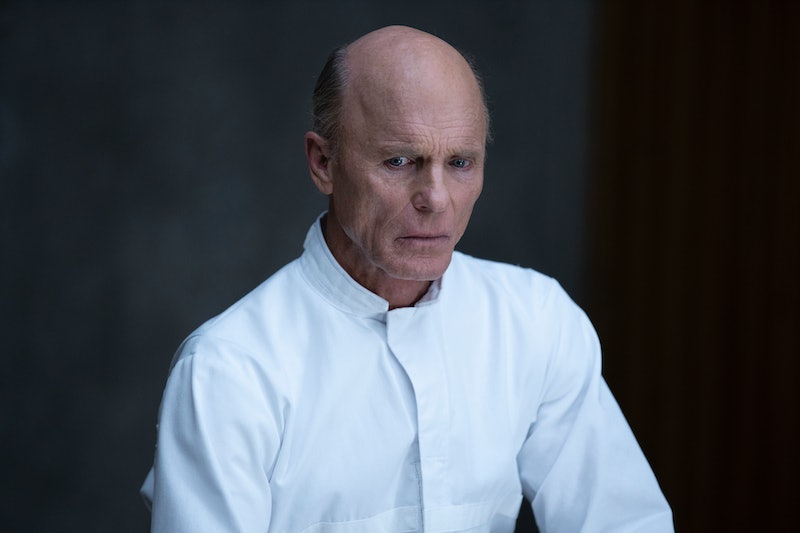 Spoilers ahead for Episode 6 of Westworld Season 3. There are a lot of things about Westworld that are confusing, but perhaps one of the most confounding is the Season 2 finale's post-credits scene. When was it taking place? Was it real? Who was putting William through his loop? Now, the Man in Black's AR therapy in Season 3 could finally shed some light on the scene that's left fans scratching their heads for nearly two years.

To recap the scene in question, let's go back to the climactic events of Westworld's second season. Dolores has confronted William at "the Door," aka the entrance to the Forge, where all the human minds that have been copied in the park over the years were being stored. William, who had just murdered his own daughter after beginning to question the nature of his own reality, points a gun at Dolores and shoots — except it backfires, blowing off half his hand. That's where Dolores leaves him… until after the credits, when an injured William takes the elevator down into the Forge. Only now, it's in ruins, hinting that the scene doesn't take place immediately after the events of the finale, but rather years (decades?) into the future.

Inside the ruined Forge, William is greeted by someone — or something — that looks like his daughter Emily. He asks her if he's in a simulation running inside the Forge, but she insists that what's happening is real. (And indeed, the scene isn't shot with the narrow aspect ratio that signifies a simulation.) He realizes that, at some point, he has been turned into a host, and is being run through the events of the most terrible day of his life: the day he killed Emily. He asks what she's testing for, and she gives him the same answer he gave Jim Delos all those years ago: fidelity.

This scene raised many questions. If William is now a host, who turned him into one, and when? Why are they putting him through a loop and testing him for fidelity? At what point will the show catch up with this post-apocalyptic flash-forward? Well, if recent events in Westworld Season 3 are any indication, Season 2's post-credits scene might not be a flash-forward at all.

In his first Season 3 appearance, William spent the episode bickering with the ghost of his daughter about whether he chose to kill her and was evil, or whether he was simply following his programming and was a powerless passenger inside his own body. It's unclear whether Emily's appearance is supernatural, a hallucination, or a host sent by Dolores in the form of William's daughter to drive him insane. But the sequence raised the possibility that Season 2's post-credits scene was merely a hallucination (or visitation?) much like the one William experienced in that episode.

However, that wouldn't explain how he was transported to a ruined version of the Forge. William's hallucinations of his own daughter still took place inside his own home, not in some imagined apocalyptic landscape. The most recent episode, "Decoherence" offers another explanation: AR therapy. After being committed to an institution by Dolores, William was put through an augmented reality version of immersion therapy, forced to relive his childhood trauma and sit through a counseling session attended by several versions of himself and led by Jim Delos.

Could Season 2's post-credits scene just have been part of William's AR therapy? More than a hallucination, that would explain how William is transported to the Forge and how he's back to wearing his Man In Black outfit, bullet-ridden and maimed. His conversation with Emily wasn't actually revisited during the course of the episode, before William was pulled out of the AR therapy by Bernard. But perhaps his immersive trip back to the Forge was simply glossed over during that episode, and William will flash back to that portion of his therapy at a later point. Or perhaps he'll be put back into an AR experience at some point after being rescued by Bernard. Or maybe, most intriguingly, he's still inside the AR therapy — and his supposed rescue by Bernard isn't real at all, but rather a part of the experience.

Whether Season 2's post-credits scene was a hallucination, an AR experience, or an actual glimpse into a far-flung future, William's story in Season 3 has opened up several new tantalizing scenarios that could unlock that inscrutable sequence. Viewers may not have the answer yet, but it feels like the show is one step closer to solving the mystery.