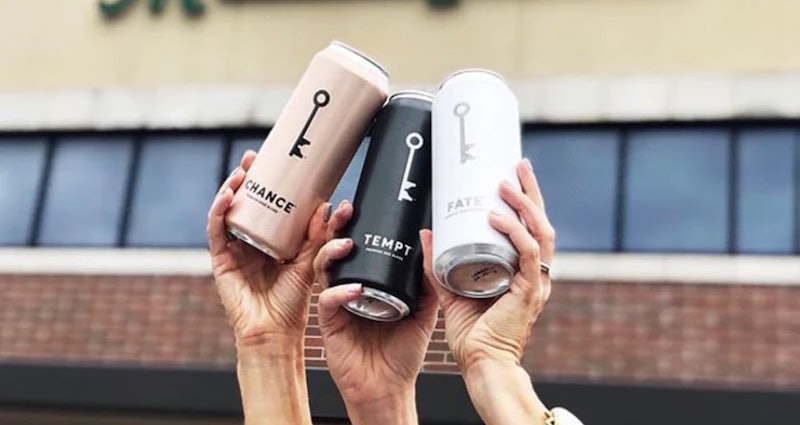 As further proof that the canned wine trend isn’t going away anytime soon, we have this: Kroger carries “shareable” canned wine now, according to The Takeout. The wine in question is from WineSociety, a wine subscription start-up that originally launched in early 2018 — but there are also limits as to which Krogers will carry it: Right now, it’s only available at Kroger locations in Ohio and Kentucky. So, hey, if you live in either of those two states, congratulations! It just got a whole lot easier for you to bring wine to your next outdoor gathering.

WineSociety has three main offerings, which they call Tempt, Chance, and Fate; there’s also currently a fourth, limited-edition wine available on their website called Pleasure. All of them are blends of grapes grown in California vineyards: Tempt, the red blend, combines syrah, petite syrah, and petite verdot; Chance, the rosé, is a blend of zinfandel, syrah, and barbera; and Fate, the white blend, throws together albarino and chardonnay. It’s not totally clear what Pleasure is, but there’s definitely gamay involved. A red wine that’s often likened to pinot noir, gamay is light-bodied and fruity; WineSociety describes theirs as “smooth and delightfully sweet with a delicate floral aroma.”

(That’s neither here nor there, though — Pleasure is, alas, not one of the wines currently available at Kroger. It is a limited edition, after all. You’ll have to stick to Tempt, Chance, and Fate for now.)

Typically, WineSociety’s wines are only available in cases. These cases can be bought a single-time purchases or as an ongoing monthly subscription; they each contain nine 500ml cans, making for a total of 4,500ml per case. Each case, therefore, nets about 36 glasses of wine (with each glass being about 125ml apiece). Cases are $132 each (which comes out to about $3.60 per glass); both single-variety cases and a variety pack case are available.

The company did recently launch what they call the “Little Black Box”; unlike the cases, the Little Black Box is only available as a single order, not as a monthly subscription, and, for $49, contains only three cans — one each of Tempt, Chance, and Fate. But that’s still the smallest order you can place on the WineSociety website… which, of course, is where Kroger comes in.

According to a press release, WineSociety’s Kroger debut marks the first time the company’s 500ml cans are available for individual purchase — that is, without needing to buy three or nine cans at a time. It hasn’t been specified what they’ll cost, but given how the math works out per can according to the price of the cases, something in the $10 to $14 range is likely. You’ll be able to choose from three primary WineSociety varieties: Tempt, Chance, and Fate.

At 500ml, the cans hold less than a standard bottle; bottles usually come in at around 750ml, putting each WineSociety can at about two-thirds the regular capacity. (For the curious, that’s also less than a “Big Can” of AriZona iced tea, which hold about 680ml.) It’s still more than a single serving, though — a typical pour is about 150ml, meaning each can is good for about three glasses. That’s why they’re often described as “shareable,” although WineSociety’s website calls them “the perfect amount for sharing or indulging” (emphasis mine).

The timing on this launch seems a little unusual; canned wines are frequently touted as being perfect for picnics, but with the temperatures growing colder with the coming of fall, picnic weather isn’t exactly here anymore. At the time of this writing, it’s in the 40s in both Ohio and Kentucky. Then again, it is bonfire season, which is kind of the autumn version of picnic weather, so, hey, maybe there’s still a market for canned wine right now.

Head here to find your nearest Kroger; I recommend calling the store to ask if they carry WineSociety’s wines before making the trip to it, though. Just, y’know, in case they don’t have it. May as well save yourself the trip if that’s the only reason you’re going, right?