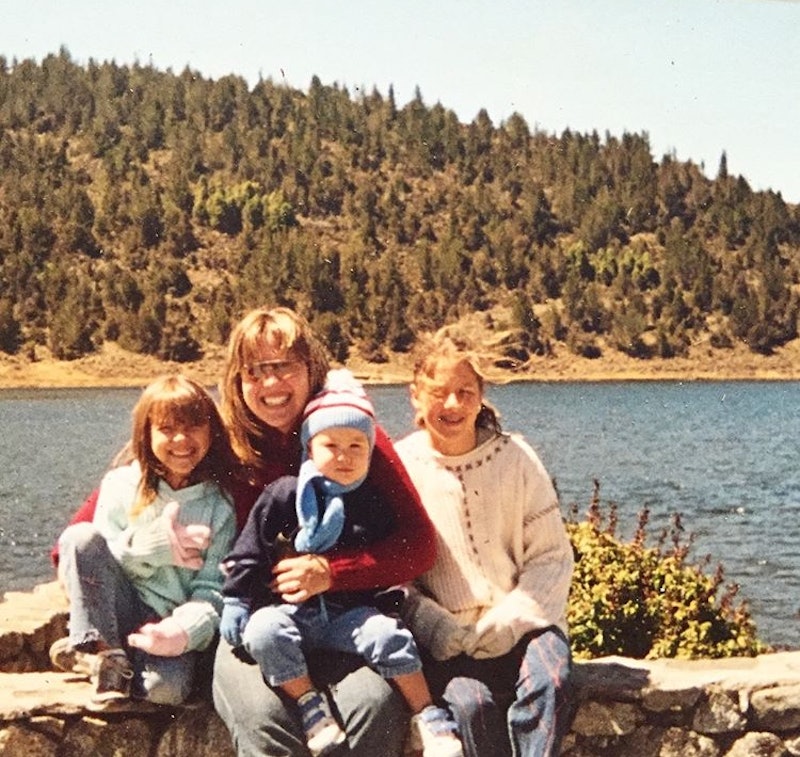 When I moved into my first “adult” apartment, the most important thing I needed to bring with me was a pink plastic photo frame with the words “GROOVY GIRLZ” on it. The frame holds a photo of me and my cousin as toddlers, smiling in matching Hello Kitty shirts and ponytails. But my attachment to the frame isn’t about the photo in it — it’s about the fact that it used to sit on my nightstand in my bedroom in Acarigua, Venezuela, when I was little.

In 2004, shortly after my seventh birthday, my mom packed the photo frame into a suitcase and moved me and my siblings to the United States, where my dad waited for us. Of all of the things she decided to bring or leave behind, it still strikes me that she picked that pink photo frame.

We spent a total of 10 months in Venezuela without my dad. My parents’ decision to immigrate was fueled by Hugo Chavez’s increasingly authoritarian rule over Venezuela, which they knew wouldn’t end well. Even now, the humanitarian, political, and economic crisis worsens with each passing day. After being held at gunpoint in 2002 by a group of men during a car robbery — something that scarred my mom so deeply it left her body unable to produce breast milk for my baby brother — she knew she couldn’t see a safe future for us at home.

In retrospect, I think now that my mom’s first instinct would’ve been to save as much money as she could before we moved. But instead, she dedicated herself to showing me, my brother, and my older sister as much of Venezuela as she could.

We darted off to the beach on weekends: a road trip to Chichiriviche with family friends, a couple of days at an adorable posada in Tucacas with my aunts and cousins. Pink flowers lined the walls where we went outside for breakfast before boarding a peñero — a small fishing boat — to take us out to the cays. That posada marks the first time I can remember thinking a place was beautiful. I can still feel the hot sun beating on my back as I laid on a pool float in the Caribbean, pretending to fall asleep, wishing the Barbie scuba set I got for Christmas hadn’t been washed away by the surf.

For my brother’s second birthday, we traveled with the same aunts and cousins to Merida in the Andes Mountains. We spent a day in Los Aleros, a theme park preserved to look like an Andean village of the 1930s. The winding, two-lane highway up the mountain was a dizzying trip to take with a toddler, an angsty pre-teen, and me, an overly talkative six-year-old, but my mom never complained.

I didn’t think much of these trips until years later, when I helped my mom organize our family photos during a particularly thorough round of spring cleaning. “I knew we would probably never go back, at least not as a family,” she told me, matter-of-factly. “It was my way of saying goodbye to Venezuela, but also my last attempt to give you and your siblings a taste of where you come from, of how beautiful your country is no matter how much harm and damage any government inflicts on it.”

I didn’t know back then how much those moments would mean to me now.

It wasn’t until then that I realized how intentional she was about our last year in Venezuela — how the times she cried over my dad’s absence weren’t perhaps as much about my dad as they were about the home she already missed, even before she’d fully left it behind.

When we weren’t traveling, my mom made sure we spent as much time with our family as possible. Our after-school activities consisted of going out for ice cream and visiting my grandpa in the house where my mom grew up — the one he designed and had built for my grandma as a surprise in the ‘70s, with an internal garden and a lemon tree in the backyard.

On weekdays that she could get off work, my mom let me skip school so we could drive an hour to Barquisimeto to spend the day with my godmom, my mom’s best friend since childhood. Sometimes we would go walk around the mall, el Sambil, but mostly I’d sit around the house where my godmom still lives today, listening to her and my mom talk about anything.

I spoke with my godmom on the phone last week. She doesn’t have a visa to come to the States, and traveling anywhere outside Venezuela is becoming more and more difficult due to hyperinflation and a crippling economy. I cry thinking that I don’t know when I’ll get to see her again.

But I close my eyes, and I remember riding in the car with my mom on the way to Barquisimeto on a Wednesday morning. I remember the guayaba tree in my aunt’s front yard, where she’d slice the fruit open and sit next to me while I devoured it on her front porch. I remember my mom rushing us back to Acarigua that same afternoon, just in time for my school’s book fair, where she’d buy me the latest Ediciones Ekaré.

When I look at the pink plastic photo frame, I picture my mom neatly packing her life away, well aware that she was leaving behind her father, her childhood, the country that raised her. I think of those last 10 months and the emotional weight she carried silently, by herself, putting on a brave face to take us to the beach or the mountains. I didn’t know back then how much those moments would mean to me now, how they’d eventually come to define my understanding of the word “home.” But my mom did. And thanks to her, I remember.

Without This Woman, The Glass Ceiling Would Have Fewer Cracks

Without This Woman, I Wouldn’t Know I Can Win