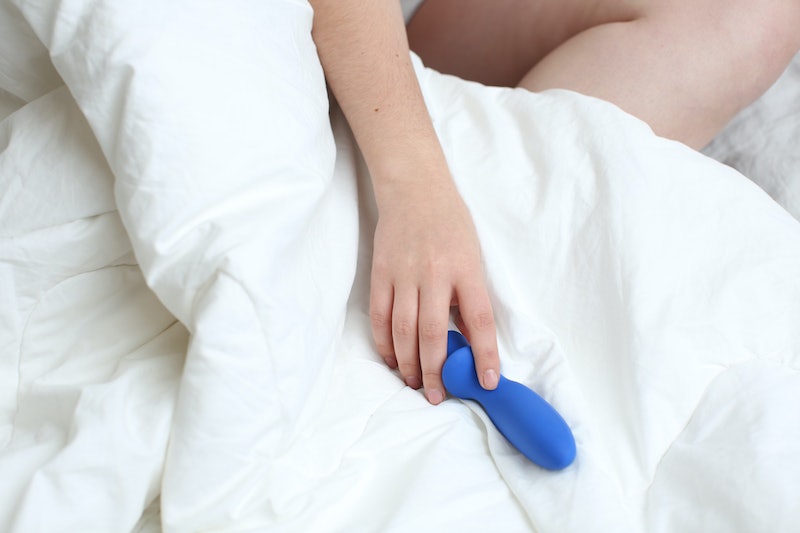 When TooTimid.com asked the respondents that very question, they responded with comments like, "He’s not at all comfortable about them, he’d be embarrassed. I take great pains to make sure this does not happen," "I like using [sex toys] on my own cause I know what I like. I don’t like having to explain to him what I like," and "He knew I had them but didn't want to know that I used them and there was no way he would have used them with me." One shared, "With my ex, I hid a very simple basic vibrator. It wasn’t even phallic in shape, and I only used it to vibe my clit. But I was anxious about sharing it with him. Then he found it and immediately wanted me to get rid of it because it was ‘bigger’ than him."

People who don't talk to their partners about sex toys are missing out not just on the intimacy that comes from full honesty but also on all the fun that comes from using toys with a partner.

All in all, it seems like women are hiding their sex toys from their partners to protect their egos, probably due to the persistent myth that a penis should please a women more than anything else — especially anything she can provide for herself. "More often than not, the real issue is that the partner feels left out," Alicia Sinclair, sex educator and CEO of b-Vibe and Le Wand, tells Bustle. "Their ego demands that they must give their partner an orgasm in order to be a good lover. But truly, orgasm is the responsibility of the person experiencing it and not the responsibility of their mate."

The idea that a man has failed at sex if he can't give a woman an orgasm with his penis couldn't be further from the truth. Only a quarter of women reliably orgasm through penetration. A woman's lack of orgasm during intercourse is not proof of a penis' inadequate size or endurance; it's a reflection of the fact that the vagina has few nerve endings.

Plus, women's desire to use sex toys doesn't mean they're encountering any problems during sex with their partners. Sex toys don't have to be tools to solve a problem; they can be just what their name suggests: toys. Sources of additional fun.

The limited way our society views sex suggests that penis-in-vagina intercourse is the ultimate pleasure, any woman who wants something extra is somehow defective, and any man who can't satisfy a woman through these means alone is defective as well. The end result of all these myths is that women feel ashamed for using sex toys, and men feel ashamed if their partners use sex toys (or, for that matter, if they use sex toys). And then we have people keeping secrets from their partners that really should not have to be secrets at all.

People who don't talk to their partners about sex toys are missing out not just on the intimacy that comes from full honesty but also on all the fun that comes from using toys with a partner. Sex toys start conversations, introduce variety into the bedroom, and make it easy to orgasm during intercourse if you need clitoral stimulation.