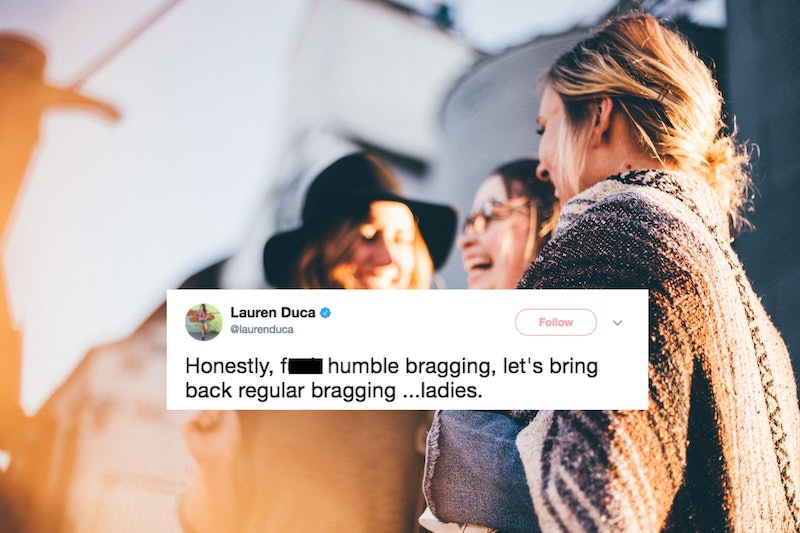 Humans of the internet, we had somewhat of a triumph at the beginning of this week when someone coined a term for that hella annoying phenomenon of men repeating an idea that you have slightly louder and taking credit for it; now "hepeating" has been given a cultural platform it never had before. But although it's at forefront of discussion this week, it's hardly a new idea — women are perpetually either sidelined when men take the credit for their ideas, or worse, taught to be "humble" and never try to take full credit for their successes in the first place. Enter the humanity restoring Twitter thread of women officially shutting down "humble bragging" and bragging about themselves for real instead.

The thread, launched by a tweet by journalist and known Twitter delight Lauren Duca, quickly amassed hundreds of responses from women finally letting themselves take the ~spotlight~. The quote retweets of stories on this are about as close to that GIF of Liz Lemon exclaiming "High fiving a million angels!!" in human form as you can get. Women are sharing their career successes, their personal successes, their triumphs and wins both big and small — and, for once, doing nothing to minimize them to make them seem less "intimidating" or "self-centered".

This isn't just inspirational because of all the fierce ladies that are lighting up Twitter timelines with their successes right now; it's an awesome shift in a narrative that all too often compels women to underscore their own successes. The expectation rears its ugly head pretty fast — you probably remember, for instance, that viral story about women agreeing with men who called them beautiful on dating apps, and the ridiculous, toxic responses they got back. Toxic, alas, but not unsurprising; women are already conditioned to be less vocal about their accomplishments than men, out of ingrained ideas that modesty is more "feminine," and a perception of women who own themselves as "conceited". Indeed, even in asking for raises, studies have shown that there is much more of a "social cost" for women listing their accomplishments to explain why they deserve the money than there is for men. If there's any reflection of just how discouraged women are from breaking out of that expectation, it's viral stories and actually published studies demonstrating just how real the consequences are.

And for that fact alone, it can seem particularly exhausting being a woman in the world — when you're not being mansplained about your own damn job, or hepeated when your ideas get stolen, you're supposed to somehow convey that you're a smart, confident, capable person without, y'know, saying or doing anything too "braggy".

That being said — less of that, and more of this, please:

It's arguable that in some ways, the millennial generation has been better off than most in terms of owning their accomplishments; but where modesty once undercut women's accomplishments, the reign of the "cool girl" and the Instagram babe has also affected ours. The "cool girl" is easy, breezy, and effortless; she doesn't get ruffled, and doesn't talk about the work she puts into her accomplishments, or even really the accomplishments themselves. It sets a different scene — often a far more Instagrammable one — but the result is the same: women, at the end of the day, put in effort to project a persona that fits in with the societal norm, and puts them in a position where they have to swallow down the things that make them most proud if they want to pull it off.

The responses on Duca's thread aren't just an opportunity to brag on ourselves (as much needed as it is); the responses are proof that, despite what we usually tweet or 'gram or what have you, we all are struggling and hustling and sweating to get where we are. Success didn't come overnight. Our Instagram accounts were made, not born, dammit! Sometimes just leveling with your peers about not just what you love about your life, but what it took to get there, is the exact push or comfort that you need.

It's 2017, y'all. You deserve to share your best self with the world. Go ahead and brag on yourself, both on Twitter and off — nobody's going to light up your spot and bright as you will, and hopefully you'll inspire other women to follow suit.