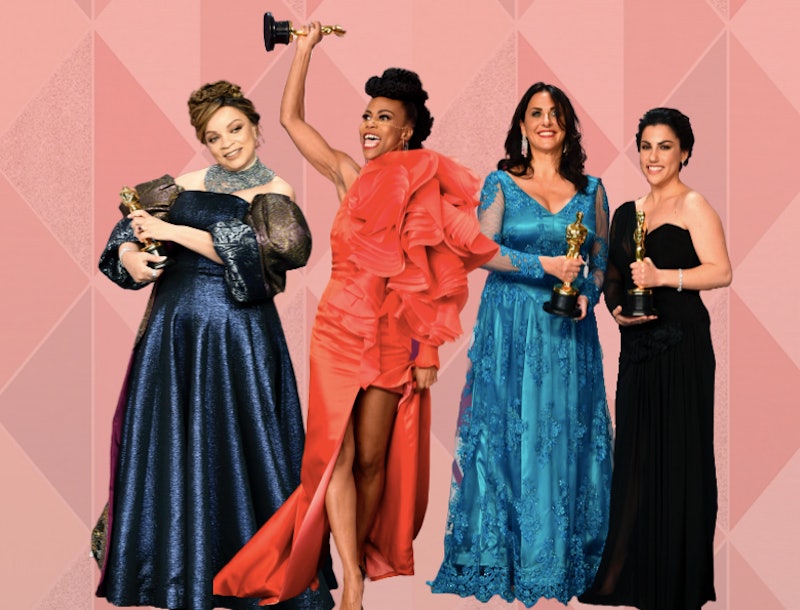 If "The Oscars" and "gender equality" don't typically go hand-in-hand in your mind, you're certainly not alone. Year after year, the Academy Awards has snubbed women, whether by honoring only male-driven Best Picture nominees, skipping over women in many behind-the-scenes categories or, more often than not, sadly doing both those things. Yet the 2019 Academy Awards not only recognized female artists, but truly celebrated them, in a way few, if any, Oscar ceremonies have done before.

For one thing, women of color practically swept the night's early categories. The first award of the evening, Best Supporting Actress, went to If Beale Street Could Talk star Regina King. Shortly after, Free Solo co-director Elizabeth Chai Vasarhelyi won alongside Jimmy Chin for Best Documentary. And after that, two women, Kate Biscoe and Patricia Dehaney, won the Makeup and Hairstyling Oscar along with Greg Cannom, for Vice.

But what happened next was truly groundbreaking. First, Black Panther costume designer Ruth Carter won for her work on the Marvel film, becoming the first Black woman ever to win in that category. Right after her, the Best Production Design Oscar went to Black Panther's Jay Hart and Hannah Beachler; the latter became the first Black woman in that category to take home the gold. "I give this strength to all of those who come next to keep going and to never give up and when you think it’s impossible, just remember this piece of advice I got from a very wise woman: I did my best, and my best is good enough," said Beachler in her moving speech.

Only an hour or so into the Oscars, four women of color had won awards; as critic Kyle Buchanan noted on Twitter during the show, that included two of the only three Black women in Oscar history to have won awards for anything out of the acting categories.

The incredible progress didn't stop there. The Best Animated Short Oscar went to Bao, directed by Domee Shi, a Chinese-Canadian filmmaker. In her poignant acceptance speech, Shi advised "all the nerdy girls out there" to tell their stories, saying, "you’re gonna freak people out, but you’ll probably connect with them, too."

And right after that, another women of color won a directing award — Rayka Zehtabchi, the Iranian-American director of the Netflix documentary short Period. End of Sentence. "I can't believe a film about menstruation just won an Oscar," said Zehtabchi during her speech, and indeed, that's about as barrier-breaking as it gets.

Yet for all the wonderful milestones of Sunday night's show, the 2019 Oscars wasn't exactly a gender-balanced event. As reported by the Women's Media Center, just 25 percent of all non-acting nominations went to women — only a 2 percent increase from 2018's numbers. Like so many years prior, there were no female Best Director nominees despite numerous worthy contenders, and as noted by the WMC, there were actually fewer women nominated for categories like Original Screenplay and Production Design than in years past.

As frustrating as those statistics are, though, it doesn't take away from the amazing achievements of women during the actual ceremony. So often, audiences sit through awards shows only to see women shut out of category after category — especially women of color, who are vastly underrepresented in Hollywood as a whole (a 2019 USC Annenberg report found that just nine of the 1,200 highest grossing films that came out between 2007 and 2018 were made by female directors, for instance). We're used to seeing men dominate awards shows, and the industry overall. So to see so many talented female artists pick up awards at the 2019 ceremony? It's pretty damn cool.

As Amy Poehler said early on in the night, "All women are naturally supporting actresses because women naturally support each other." She may have been joking, but the sentiment was definitely real; as female artists took over the 2019 Oscars, from Carter to Shi to Olivia Coleman to Lady Gaga, women everywhere thrillingly celebrated their successes alongside them.