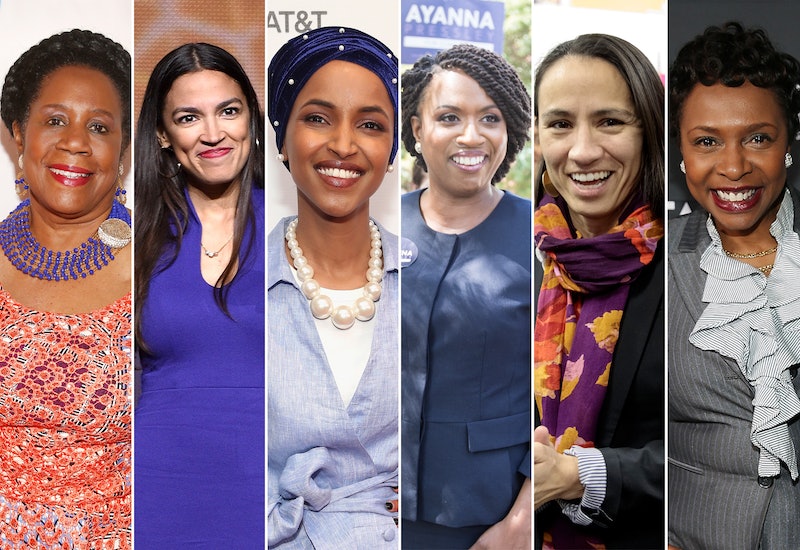 You're probably acutely aware that women are vastly outnumbered when it comes to who holds elected office in the United States, and representation for women of color is even more abysmal. There's some good news, though — women of color who won a 2018 midterm race will have a huge impact on those statistics.

This year saw a 75 percent increase in women of color who became nominees for Congress since 2012, according to a study from the Reflective Democracy Campaign. That rise was bolstered by over 400 black women who ran for office at every level, as well as a record number of Native American women candidates. Emily's List, a political action committee aimed at electing Democratic, pro-choice women, dubbed 2018 "the year of the Latina" in the hopes that this year's candidates would change the fact that there are currently just as many men named Steve serving in Congress as there are Latinas.

Just 38 of the 107 women in Congress right now are women of color, according to the Center for American Women and Politics, comprising 7 percent of Congress as a whole. With women expected to make major gains in the midterm election, women of color represented the chance to spark a rise in both gender and racial diversity in Congress.

Here are some of the women who won on Tuesday.

Just one minute after polls closed in Massachusetts on Tuesday, the Associated Press called the state's 7th congressional district race in favor of Ayanna Pressley.

Pressley achieved a historic primary win in September when she unseated longtime incumbent Rep. Michael Capuano, a 10-term congressman. Pressley is the first black U.S. representative in the state's history. Back in 2009, she was also the first woman of color to be elected to the Boston City Council.

Incumbent Rep. Lisa Blunt Rochester won her bid for reelection to Congress, where she represents Delaware's at-large congressional district, according to the AP.

Another incumbent, Rep. Sheila Jackson Lee won her bid for reelection in Texas' 18th congressional district, where she has served since 1995.

Rep. Nydia Velazquez also won her bid for reelection to the U.S. House, according to the AP, where she represents New York's 7th congressional district.

New York's Alexandria Ocasio-Cortez rocked the political mainstream earlier this year, when she ousted longtime Democratic Rep. Joe Crowley, who was widely expected to be Speaker of the House if the Democrats win the majority in the House.

Upon her Tuesday win, as called by the AP, Ocasio-Cortez is the youngest woman to ever be elected to Congress.

Another New York incumbent has secured her seat for an additional term, according to the AP. Democratic Rep. Yvette Clarke won her reelection by a veritable landslide.

Ilhan Omar won her seat in Minnesota, where she will represent the 5th congressional district. She became one of two politicians who will soon serve as the first Muslim women in Congress.

Along with Omar, Rashida Tlaib is one of the first Muslim women elected to Congress — along with being the first Palestinian woman in Congress. She will represent Michigan's 13th congressional district.

Democratic Rep. Gwen Moore won her bid for reelection over in Wisconsin's 4 congressional district, per the AP. She has represented that district since 2006.

Veronica Escobar, who won the seat vacated by Texas Democratic Senate candidate Beto O’Rourke in Texas's 16th district, according to the AP, was one of two Latinas to win elections Tuesday night. Until Tuesday, Texas had never elected to send a Latina woman to Congress.

Sylvia Garcia is the other Latina woman that Texas will be sending to Congress, according to the AP. She will represent Texas's 29th district.

Former Mayor of Southfield, Michigan, Brenda Lawrence won her bid to represent Michigan's 14th congressional district, according to figures published by the AP.

Debra Haaland won her election to the U.S. House, where she will represent New Mexico's 1st congressional district, per the AP. She, along with Sharice Davids, will be one of the first Native American women elected to Congress.

Sharice Davids will not only be the first of two simultaneously elected Native American women elected to Congress, she will also be the first LGBTQ representative that Kansas sends to the House.

Hawaii Senator Mazie Hirono, who became the first Asian-American woman elected in 2006, stood her ground in November's midterm, securing herself another term in Washington, per the AP.

Former National Teacher of the Year Jahana Hayes bested her opponent on Tuesday, becoming the first black woman to represent Connecticut in Congress, according to AP election data.

Stephanie Murphy was re-elected to the Florida's 7th congressional district in the House. She became the first Vietnamese-American woman elected to Congress in 2016.

Texas Democrat Eddie Bernice Johnson has held her seat since 1993, and she sailed to victory on Tuesday.

Alma Adams first won North Carolina's 12th congressional seat in 2014 — a tough year for Democrats — and had no problem holding on to it four years later.

Illinois Rep. Robin Kelly cruised to victory in her re-election bid as well.

Donna Shalala, who served as Bill Clinton's Health and Human Services Secretary, flipped a Republican seat in Florida on Tuesday, helping Democrats solidify their majority in the House.

Grace Meng is one of the few Taiwanese members of Congress, and has represented New York's 6th congressional district since 2013.

Bonnie Watson Coleman was one of many New Jersey Democrats who had a good night on Tuesday, easily winning re-election to the state's 12th congressional district.

Democrat Val Demings was re-elected to the 10th congressional district in Orlando, Florida without GOP opposition.

Frederica Wilson, another Democrat in Florida's Miami area, ran unopposed and was re-elected to the 24th congressional district.

Yet another victory for Democrats in California. Anna Eshoo of the state's 18th Congressional District, defeated her GOP opponent, Christine Russell.

Lucy McBath, a "Mother of the Movement," was declared the winner in Georgia's 6th Congressional District on Wednesday morning. McBath has been a vocal gun control activist since her son Jordan Davis was killed in 2012 by a white man in a store parking lot who complained about loud music coming from Davis' car. She defeated incumbent Republican Karen Handel.

The midterms did not produce the so-called "blue wave" that Democrats had hoped for, but it was a historic election, nonetheless. A record number of WOC ran for office, and many of them succeeded. And that is always something worth celebrating.