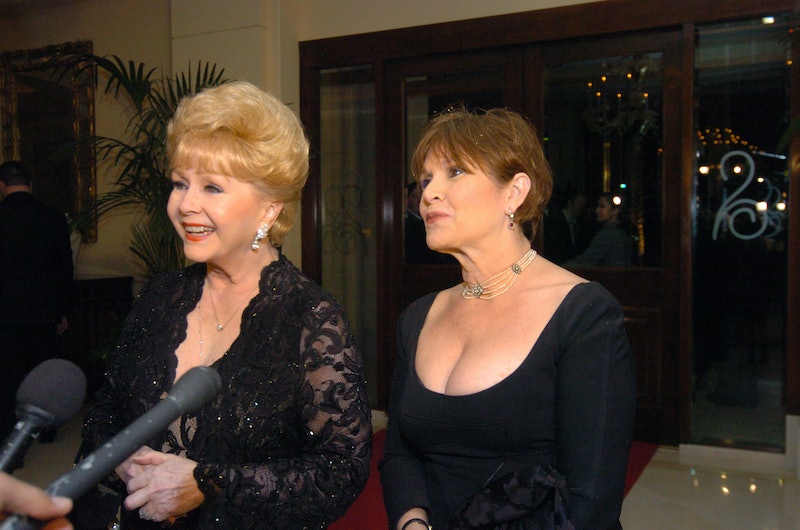 As if 2016 wasn't already difficult enough for us all to handle, we lost Hollywood mother-daughter legends Debbie Reynolds and Carrie Fisher within one day each other as the holiday season wound down. On Dec. 23, Fisher suffered a heart attack while on a plane from London to Los Angeles. Medical personnel were able to remove her from the flight, and that night it was reported that she was in stable condition. However, she never regained consciousness, and to the world's shock, on Tuesday, Dec. 27 at 8:55 in the morning, Fisher died at the age of 60.

One day later, the world was devastated to learn that Fisher's mother, Debbie Reynolds, had also passed away. On Dec. 28, Reynolds was at her son Todd Fisher's home, preparing Carrie's funeral arrangements, when she was rushed to the hospital, reportedly because she suffered a stroke. An unnamed source told the Los Angeles Times that Reynolds was having trouble breathing, but the cause of Reynolds's death remains unclear (some are even saying she died of a broken heart).

As we all grieve and send our deepest condolences to Fisher's and Reynolds's loved ones, these deaths also leave us confronted with evidence of how prevalent heart disease is among women — as well as how often it goes unnoticed. From what we know, neither Fisher nor Reynolds suffered any previous symptoms that would indicate heart disease. However, according to the American Heart Association, two thirds of women who die of heart disease had no reported symptoms prior to their death. Heart disease is usually thought to be more common in men, but it's actually more common among women, and it's the leading cause of death in women all over the world.

Because the symptoms so often go undetected, it's important to educate ourselves on this health issue, so we can in turn educate our loved ones, and keep an eye out for any heart disease symptoms they may be exhibiting.

Pain, Pressure Or Discomfort In The Chest

It sounds like a no-brainer, but it's a serious symptom — and one that a lot of women don't think twice about. The medical name for this symptom is angina, which means the sensation of feeling pressure in your chest. It indicates that your heart muscle isn't getting enough oxygen-rich blood. The Mayo Clinic says this is the most common sign of heart attack in women, but it's not always the most severe. In other words, it may not be extremely painful, but it's a symptom that should never be ignored.

Women are used to juggling many different things at once. We're expected to maintain a high-powered career, take care of our loved ones, and keep ourselves healthy in the meantime. As a result, feeling tired and rundown is something we're very familiar with.

Extreme fatigue is a sneaky symptom of heart disease, though, and a lot of women overlook it because they think the feeling stems from just another busy day. They simply fight through it, when it's a symptom that should never be downplayed. If you feel tired from doing simple tasks, or there's a heavy feeling of fatigue following you throughout the day, see a doctor immediately to make sure you aren't at high risk for a heart attack.

When you can't breathe properly, that's a surefire sign that your heart isn't working at its optimum level. If you notice someone is gasping for air, constantly trying to take deep breaths, or seems winded from doing simple tasks, get them help as fast as you can. That means you should call 911 — not drive them to the hospital yourself.

Dr. Nieca Goldberg, a cardiologist and medical director of the women’s heart program at New York University’s Langone Medical Center, told the Huffington Post that women have atypical symptoms of heart disease, so their heart attacks don't always look like the ones you see in the movies, where someone clutches their chest and dramatically falls down. "And while women may have that classic symptom, many times women have symptoms that don’t scream out ‘heart attack,'" Dr. Goldberg said.

Strangely enough, the pain associated with a heart attack can often exist lower in the abdomen for women. A heart attack can feel like stomach pain, indigestion or nausea (much like you would experience from a stomach flu), which is why women might think they've just eaten something unpleasant. In some severe cases, women report that it feels like an elephant is sitting on their stomach.

The sweat that breaks out before a heart attack may feel very similar to nervous or anxious sweating, but it's a very serious symptom of heart disease that's often associated with shortness of breath. Women may just chalk it up to menopause-related hot flashes — but if it suddenly comes on, and there is no explanation for the sweating, it's a good time to check in with paramedics just in case.

Pain In Your Back, Neck Or Jaw

This particular pain is much more common in women than men who are suffering from heart disease. Because we've focused for so long on what a heart attack looks like in men, we're programmed to think that pain shooting down the left arm is indicative of cardiac arrest (remember the opening scene from Ever After?), but it's critical that we learn how pain in the back, neck or jaw can be just as reflective of heart disease.

The pain can be either sudden or it can gradually or slowly make its way into the body, and it could even wake you up in your sleep. Any unexplained pain above your waist should be reported to a doctor immediately.

Women deal with uncomfortable bloating all the time. We bloat more easily than men do, unfortunately, so a woman who looks down and sees swollen legs, feet, or ankles may just brush it off as another fluid fluctuation in the body. But these are symptoms that should never be disregarded. Swollen parts of your lower body could mean that your heart isn't pumping enough blood, so the blood gets stopped up in the veins and causes bloating.

You wouldn't expect snoring to be a symptom of heart disease, but it could be representative of sleep apnea, a condition that causes you to stop breathing a few times in the middle of the night. This puts stress on your heart by increasing your blood pressure and damaging blood vessels. Unusually loud snoring that sounds like you're gasping for air could be very dangerous, so don't hesitate to speak with your doctor and get some tests done.

We've lost more than enough women to heart disease, and it's about time that we start treating it like very real threat it is to women, rather than thinking about it as just a men's health problem. According to the Centers for Disease Control and Prevention’s National Center for Health Statistics, it takes women an average of 54 hours to see a doctor after a heart attack, while it only takes men 16 hours — a delay that can have very serious consequences.

The more we can learn about heart disease in women, the better we can take care of the women that we love and cherish the most. Keep an eye out for the symptoms of a heart attack, and educate women around you to do the same.

More like this
This Psychological Effect Might Be Keeping You From Hitting Your Goals
By Lexi Inks
20 Smart Devices Under $35 That’ll Change The Entire Vibe Of Your Home
By Emma Carey
Here’s Your Daily Horoscope For September 26, 2022
By Mecca Woods
10 Stranger Things-Inspired Halloween Costumes For True Fans
By Emma Carey
Get Even More From Bustle — Sign Up For The Newsletter