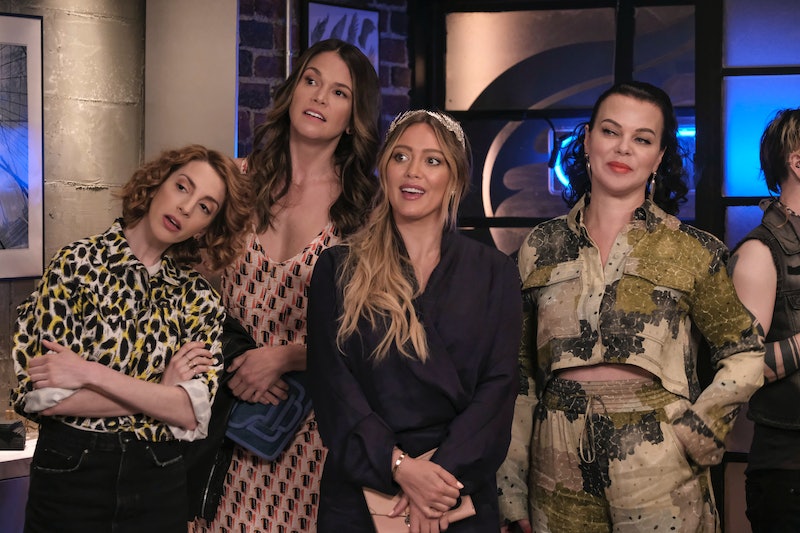 Season 5 of Younger is said and done, and, as star Sutton Foster, who plays Liza, tells Bustle in an interview, “Season 6 is going to be a completely new world. Everything is changed.” Jobs are in flux, relationships have taken a hard right, and the lies keep spreading, but the one constant on the show remains its friendships, particularly between Younger’s female protagonists. The friendships on Younger inspire the show’s stars, as Foster, Hilary Duff, and Molly Bernard all told Bustle over the phone ahead of the premiere. It's not just about the friendships onscreen, either, but the real life ones that have been born from working together underscoring the fact that the women of Younger could rule the world if someone would just let them. And they’re well on the way, it seems.

Much was said and done in Liza and Charles’ relationship over the course of Season 5, and though the couple ends up together at the end — tenuously and with a hesitant look from each, of course — the way that Kelsey, Liza, Lauren, Diana, and Maggie navigate everything from relationships to career has been the most captivating part of Younger as the show evolves. For Bernard, who plays Lauren, that these women have developed into personal powerhouses is no surprise.

“That’s the show. The show has always been about really strong, career-driven women,” she tells Bustle in an interview before the Season 5 finale. “And that’s like, one of the great thrills about being on the show is we don’t have to ask for strong, female, empowered characters. That’s the pedagogy of the show.” Bernard explains that playing Lauren has empowered her to be “fiercer in the world.” She says, “I push through [it] in a very Lauren-esque way, and that’s been because of her.”

Younger’s focus on the workplace means that many of the relationships — romantic and not — are filtered through the office, which, especially for Kelsey and Liza, comes at a price. Liza’s relationship with Charles sort of worked out in the sense that she got a promotion and the guy, but Charles is now relegated to figurehead, career-wise. For Kelsey, Zane admitted he loved her, and then he bailed on Empirical because he didn’t want Kelsey to be his boss. For Duff, who plays Kelsey, Zane’s abandonment means that he was just another, basic dude.

“I was pissed off that Zane left, like, you can’t handle the fact that she’s above you now, so you’re leaving?” Duff says in an interview with Bustle. “I do like that he had his heart on his sleeve a little more this season, but it was kind of like too little, too late. Like you didn’t take [Kelsey] seriously?” Duff knows that her character will come out of heartbreak even stronger, in part because of the relationships in the office. “I think [Kelsey's] going to really rise to the occasion, with the help of Quinn [played by Laura Benanti], who is such a boss… she’s gonna crush it," Duff says.

While their friendships are strong and supportive, it’s not all butterflies and rainbows. and empty girl power. Kelsey and Liza, Lauren and Maggie — they all fight. Diana, too, has a complicated relationship to Kelsey and Liza in the office. It's that realness that makes the show so relatable. They're not just fighting over men or some other petty thing. These are big discussions, about work, power, honesty. And their love lives, too. They all stand up for themselves, but they also love their friends fiercely and without end.

According to Duff, that's all by design. “The real love story is between Liza and Kelsey. They do fight, and they don’t back down,” she tells Bustle. “They don’t back out of the friendship or take a break from each other. They really hash it out and figure out how to move forward. They know their lives aren’t going to go on without each other, and I think that’s a really sweet element to the show. It’s not all about men and that love triangle [stuff].” In fact, both Duff and Foster say that the ultimate endgame couple of Younger isn’t Liza and Charles or Liza and Josh, but Kelsey and Liza.

Foster adds that she and the rest of the cast pride themselves on how tight their relationships are, both on- and off-set. “We take great pride in… the beautiful complications [of relationships], and we feel super proud that we really do love each other.”

They all love each other so much that Foster, Bernard, and Duff speak of constant texting, phone calls, and the occasional slumber party between members of the cast. “[Hilary] calls me if she has a 20-minute interval just because, like, we miss each other,” Bernard says. “They’re all so supportive. We made a little family on that set.”

“We all genuinely love each other,” Foster says. “We all have each other’s backs… there’s so much respect and love for one another… and it permeates through the entire environment.” They might be onto something, too. According to the New York Times, millennials are marrying later than the generations that came before them, ensuring that friend groups and relationships get just as, if not more, love than traditional romantic ones. It’s here that Younger hits a nerve — as Bernard puts it, “I just want real, meaningful, intimate friendships, and I think that’s what this show celebrates and advertises.” Given Younger’s popularity, that’s what viewers — and the rest of the cast — seem to want, too.