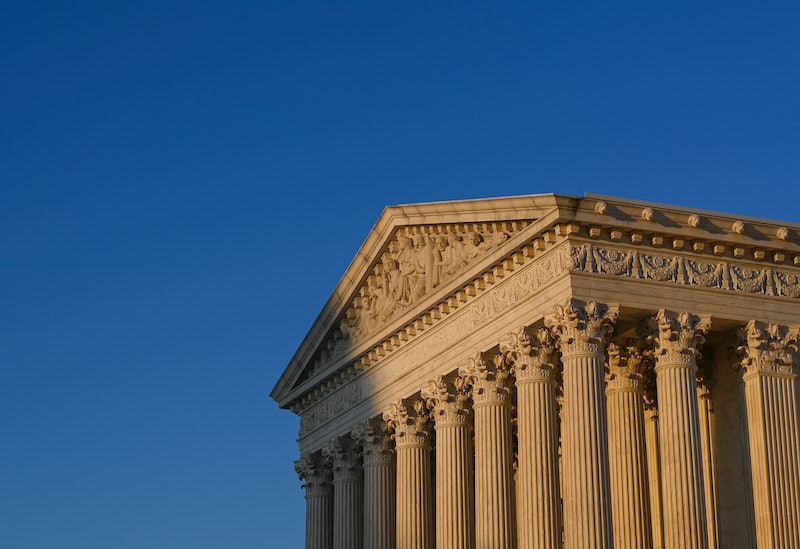 When Supreme Court Justice Ruth Bader Ginsburg passed away last fall, reproductive rights advocates immediately sounded the alarm, suggesting it was only a matter of time before Roe v. Wade was overturned. Though that reality hasn’t yet come to pass, SCOTUS’ new conservative supermajority wasted no time in delivering a blow to abortion access: on Jan. 12, the court reinstated a federal requirement that the medication used in medical abortions be picked up in-person, even though patients take the pill at home alone. The requirement had been temporarily waived as a result of the pandemic, allowing providers to mail the pills (as they can for virtually any other, equally safe medication).

“There is absolutely no reason people should be forced to go to a clinic in person — unnecessarily increasing exposure to COVID in the midst of a pandemic — to get pills that they could get by mail and safely take at home,” Diana Kasdan, the Center for Reproductive Rights’ judicial strategy director, tells Bustle, adding that many people might live hundreds of miles from the nearest clinic. “Making that trip during a pandemic will be an insurmountable hurdle for many, especially those who have children at home due to school closures, or who are suffering the financial fallout of the pandemic. … There is no doubt that this Supreme Court ruling will deter and prevent some of those people from getting abortion care.”

But this decision isn’t the only major reproductive rights case coming in January, with other high-profile cases going before various federal Circuit Courts of Appeal (aka, the last legal step before reaching the Supreme Court). And with anti-abortion law professor Justice Amy Coney Barrett getting her sea legs on the bench, advocates say the cases on deck this month could determine your rights for decades to come.

On Friday, Jan. 15, the Supreme Court will decide whether they’ll hear this case, which challenges a Mississippi law to ban abortion after 15 weeks — a law that’s been consistently struck down by the lower courts. If SCOTUS does take it up, Rachel Rebouché, the James E. Beasley Professor of Law at Temple University and an expert on reproductive health law, says, well — that’s not good. “If they hear Dobbs, it spells real trouble for constitutional abortion rights,” she says. “The 15-week ban is a clear assault on the fetal viability standard,” or the reasonable determination that a fetus could survive outside of the uterus, which is one of the current standards that makes abortion constitutional. Rebouché says that just opting to hear the case could signal that the Court is open to re-evaluating the scope of Roe and what abortion access should look like, legally.

Another issue with Dobbs is that it could affect how similar cases get brought before the court in the first place. If the Supreme Court does decide to take it up, they may say that Dobbs and cases like it are invalid on a matter of standing, meaning abortion providers can’t represent their patients in litigation that challenges restrictive laws. Should this happen, it would “hamstring virtually all present litigation” on Americans’ reproductive rights, says Rebouché.

Rebouché adds that the Supreme Court’s emergency ruling on mifepristone this week doesn’t bode well on this front either; to her, it makes it seem more likely that the Court will hear Dobbs, since they seem to have some feelings on how abortion access is currently regulated.

The Fifth Circuit Court of Appeals will rehear oral arguments for this case on Jan. 21, deciding whether a Texas law banning dilation and evacuation (D&E) procedures — the standard for abortion care after 12 weeks of pregnancy — is constitutional or not. A three-judge panel ruled that D&E bans were unconstitutional in October, but in an usual twist, the Court of Appeals then vacated its own decision later that month, and decided to rehear the case before its full bench of judges.

“Unlike laws about admitting privileges and transfer agreements, bans on procedures have a very different history before the court,” Rebouché says. The Supreme Court has typically ruled that there is “no constitutional right to a type of abortion.” This means that anti-abortion activists and their lawyers can argue that protecting the “dignity” of a potential life — by mandating a certain type of procedure be used for an abortion — trumps the person carrying the pregnancy’s right to a specific procedure.

Should this case reach the Supreme Court, which could happen if either side appeals the ruling the Fifth Circuit Court ultimately makes, Rebouché says she could see the Court saying that states have a reasonable interest in banning a procedure that they perceive to be “disrespectful of that potential life.”

The Fourth Circuit Court of Appeals will hear oral arguments about this longstanding North Carolina ban on abortion after 20 weeks pregnancy on Jan. 28. The issue up for debate is the 2015 amendment to the law, which narrowed the exemptions in case of imminent threats to the pregnant person’s life.

Some important background: the constitutional right to abortion hinges not only on Roe, which legalized abortion, but also on the 1992 case Planned Parenthood v. Casey, which established what’s called the “undue burden” standard for evaluating restrictions — basically, whether or not a restriction makes it too hard to get an abortion.

Should this case reach the Supreme Court, Rebouché says it could create a roadmap for overturning Casey. 15-week bans like in Mississippi and six-week bans like in Georgia blatantly go against the precedent Casey established about fetal viability, or the likelihood of a fetus surviving outside the uterus being used as a measure to assess constitutionality. The 20-week ban in North Carolina, though, isn’t so far from the current standard of 24 weeks that it might be hard to present a meaningful differentiation between the two, Rebouché says.

If that’s the case, the Court may decide that viability isn’t a rational standard to use to determine whether a law restricting abortion access can stand or not, and states can determine their own standards for the potential for life. That could pave the way for new abortion bans that target a fetus’ potential to survive, instead of taking into account the patient’s privacy, agency, and health.