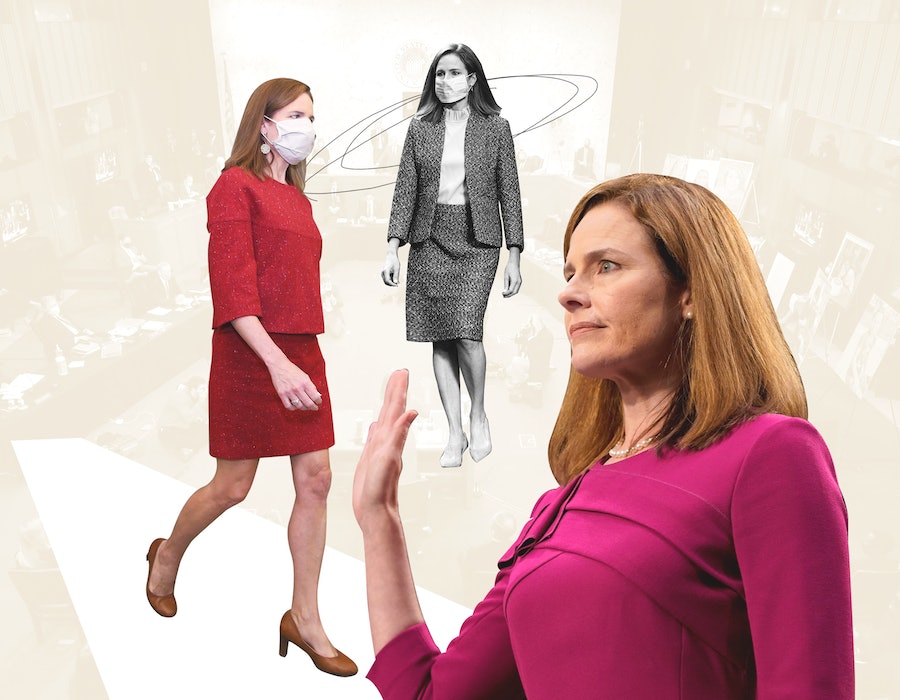 When Judge Amy Coney Barrett showed up on Oct. 12 before the Senate Judiciary Committee, day one of her four-day hearing, there was much to be said about her previous work and ideological stances. But what didn't escape the public gaze were Coney Barrett's fashion choices, like her pleated fuchsia dress and string of pearls.

In an era of pussy hats, power pantsuits, and suffragette white, women’s fashion has reached new cultural heights during Donald Trump’s first term. It’s no surprise, then, that the Indiana judge, who was nominated to the Supreme Court vacancy left by Justice Ruth Bader Ginsburg's passing, also finds herself at the center of intense sartorial discourse. As soon as the hearing began, her style choices received praise for their conservative appearance, criticism for being unjudicial, and accusations of weaponizing white Christian motherhood. Was her fashion that controversial for a government official?

Nina McLemore, a fashion designer who’s styled the likes of Hillary Clinton and Elizabeth Warren as well as numerous judges, Fortune 500 CEOs, and politicians on both sides of the aisle, says high-profile women across industries and the ideological spectrum are up against the same rigid gender norms when it comes to appearance. “Image is extremely important in how you look at someone,” she tells Bustle, nodding to societal demands to look youthful, universally appropriate, and camera-ready at all times. “We automatically look at certain types of dress and make associations with them.”

With her pastel pinks and purples, pearls, ruffles and bows, and modest skirts, Coney Barrett isn’t technically an outlier. Sen. Kamala Harris has also been known to add pearls, and House Majority Leader Nancy Pelosi has worn traditionally "feminine" colors like pink and burgundy, sensible shoes, and many a dress and skirt suit. “If we didn’t know [Coney Barrett’s] politics, I don’t know if we’d peg [her style] as conservative,” says Rhonda Garelick, a fashion critic and professor at Parsons School of Design.

Both McLemore and Garelick believe the reaction has more to do with the audience’s projection onto Coney Barrett’s fashion for her conservative leanings than the clothes themselves. “Everybody in the room already knew what their opinion [of her] was,” McLemore explains about the confirmation hearing. “She was dressing for the audience. I think she wanted to look as unthreatening as possible, like the mom next door. To that end, I think she did a good job of dressing in a way that wasn’t offensive to anyone.” For The New York Times, fashion critic Vanessa Friedman unpacked her "supermom" look: from modest three-quarter-length sleeves to arguably frumpy pumps.

Much has been said about Coney Barrett filling the shoes, after all, of a judicial giant, but she’d also be stepping into the proverbial glittering heel of a fashion behemoth. Bader Ginsburg was a style icon in her own right, most well-known for the borderline theatrical collars she wore over her robes on the bench. “Part of what gave Ruth Bader Ginsburg the ‘notorious’ [moniker] was the way she dressed,” McLemore says. “She had flair. She had a sense of style, and she had a sense of humor. All of that fit [with her], but it doesn’t fit with Amy Coney Barrett,” who, as Friedman pointed out, has made decidedly non-notorious choices thus far.

And it’s not just Coney Barrett’s pearls or dresses that are in the spotlight; in a COVID-19 world, it’s her mask choice (or lack thereof) too. Garelick, who’s writing a book about how fashion will change after the pandemic, says it's hard to separate this Supreme Court nomination from the public health crisis. After all, Coney Barrett’s nomination ceremony was deemed a super-spreader event. Coney Barrett herself was photographed not wearing a face covering at several points during the proceedings, ignoring scientist-recommended guidelines.

“A pandemic is a crisis of the body,” Garelick says. “When I say that, I mean it’s a crisis of the individual body, but it’s also a crisis of collective social bodies. Fashion is also about our bodies [and] how we dress them and how we dress our collective selves.” Coney Barrett’s decision to not don a mask for such a highly publicized occasion wasn’t just a small aesthetic choice, she says, but also a political one in terms of how she viewed public health precautions.

Her style choices might seem trivial compared to her stances on issues like abortion and religious freedom, but they tell a nuanced story of the theatrics and pageantry that go into performing a particular role for American political audiences. According to Senate Majority Leader Mitch McConnell, the full Senate will vote on Coney Barrett’s nomination on Monday, Oct. 26, which is expected to be a quick process. At this point, all that’s left to see is what she'll wear to her swearing in.