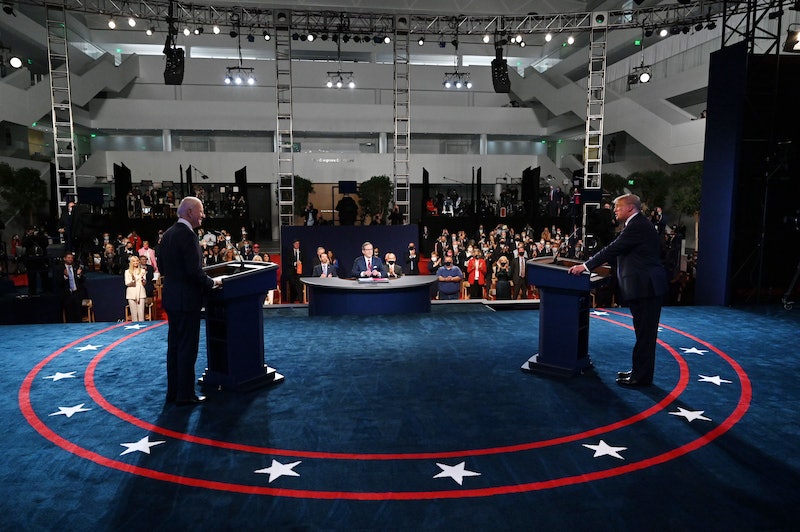 On Sept. 29, the first presidential debate between President Donald Trump and former Vice President Joe Biden left much to be said — and desired. The evening's moderator, journalist Chris Wallace, hadn't intended to fact-check the evening, and he certainly followed through on that promise. The two candidates sidestepped questions, interrupted each other ad nauseam, and tried to deliver zingers. Fortunately, when they missed, viewers turned to social media to narrate and annotate the night, and to fill in some gaps.

Throughout the 90 minutes of relative mayhem, viewers flocked to Twitter. In response to Trump's near-constant interruptions, Biden said to Wallace, "It's hard to get any word in with this clown." Susan Orlean, the bestselling author and late-night Twitter savant, responded to the line: "The word 'clown' is so f*cking delicious." Below, find Orlean's tweet and others, which added much-needed levity or context to the evening.

After Trump refused to disavow white supremacy, Hill grabbed a GIF for the moment.

DuVernay also responded to Trump's comment about the Proud Boys.

ELLE.com's columnist riffs on an argument between Trump and Biden about suburbia.

The Maine singer-songwriter writes what we're all feeling.

Elliot finds a perfect GIF for the national mood.

A theme emerges for GIF of the evening.

Gad closes out the night with purpose.

More like this
Savannah Guthrie Got Her First-Ever Tattoo With This Former Wild Child
By Suzanne Zuckerman
Jessica Simpson On The Time She Was Pursued By A Backstreet Boy & An *NSYNC Member
By The Editors
At 28, Rosie Perez Risked Her Career To Stop Playing Stereotypes
By Gabrielle Bondi
Eurovision Has Been Given A Whole New Look Ahead Of Its Liverpool Debut
By Bustle UK
Get Even More From Bustle — Sign Up For The Newsletter
From hair trends to relationship advice, our daily newsletter has everything you need to sound like a person who’s on TikTok, even if you aren’t.