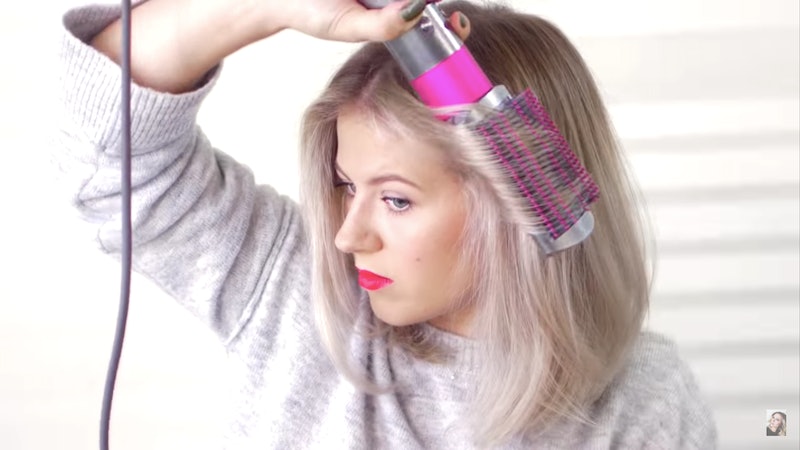 It seems like ages ago, but it’s only been two years since Dyson first launched its coveted Airwrap Styler — the $550 hair dryer-slash-curler — that subsequently broke the internet. That’s not much of an exaggeration either; the tool sold out almost instantly, with waitlists hovering above 100,000 people. Thankfully, the Airwrap has been back in stock for some time, and while you may be fortunate enough to occasionally catch it on sale, its hefty price tag is still a splurge. But budget-conscious beauty junkies can still breathe a sigh of relief. There’s a solid Dyson Airwrap dupe on the market: the Revlon One Step Volumizer. The low-cost alternative gives you a similar look (aka a salon-level blowout) for less moolah. Like, $490 less.

ICYMI, here’s a little background on the Dyson Airwrap Styler: It’s a drying and styling tool that features a whopping six different attachments including brushes, a pre-styling dryer, and Airwrap barrels in various lengths. The high-tech workhorse uses technology called the Coanda Effect to dry and style your hair at the same time without excessive heat. Essentially, it uses a motor to create air flow that wraps your hair into a sleek blowout or curls. If the name Dyson sounds familiar — other than because of their vacuums — it's because they've done this before. Remember that fancy hair dryer that looks like a pink doughnut? Yep, that was them.

Pretty incredible, right? There is, however, another noted downside of the Dyson Airwrap Styler besides the expensive cost. According to popular YouTube creators like KathleenLights, there’s a learning curve when it comes to the product. Elsewhere, Tati Westbrook said she was “totally confused” by it, then later posted a follow-up video apologizing to Dyson and admitting she used the product incorrectly. It may take a couple tries before you nail it, but it’s still a hot commodity.

As soon as the Airwrap arrived on the scene, a number of dupes quickly followed. (Just search “Dyson Airwrap vs” and see what pops up.) One of the most popular and affordable versions that has emerged? The Revlon One Step Volumizer Hair Dryer.

There are a ton of YouTube videos showing users testing out both the Dyson Airwrap Styler and the Revlon One Step Volumizer. One such user — YouTube beauty vlogger Milabu — put the two head-to-head and did a direct comparison. She noted that the biggest difference is, of course, the price tag: While the Dyson Airwrap retails for $550, the Revlon One Step costs about $60 at Ulta. Now, that's a major savings.

In the video, Milabu styles her hair with Revlon’s product on one side and Dyson’s on the other. (In the photo below, Revlon’s is on the left and Dyson is on the right.) In the end, her hair looks pretty much the same — albeit with some slight differences. She notes that the Dyson Airwrap Styler was able to dry her hair faster thanks to its higher airflow settings. Revlon’s, however, gave her hair more volume and separation, especially toward the bottom.

Ultimately, Milabu recommends both tools. She does note the versatility of the Dyson with its additional attachments, but ultimately comes back to the budget-friendly price tag of the Revlon One Step.

If you're not looking to drop serious money on a hair tool, but still want a product that will both dry and style your hair, the One Step is still a solid Dyson Airwrap alternative worth considering.

This article was originally published on Dec. 12, 2018