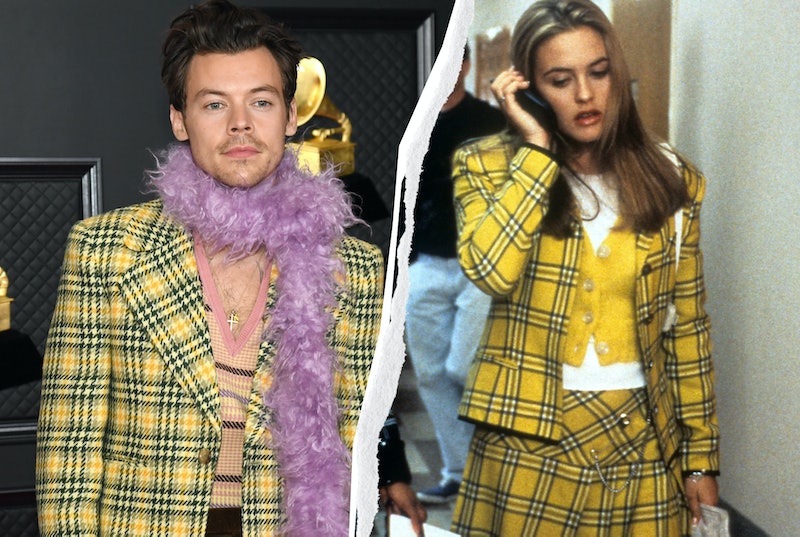 Awards shows are always a prime time to sit back and fully relish seeing your fave actors and musicians dressed to the nines. While this year’s Grammys has revealed a lengthy list of looks to gush over, Harry Styles’ Grammys 2021 plaid, Clueless-inspired outfit — topped with a lavender boa — pays homage to none other than fellow fashion icon Cher Horowitz.

Fans of the pop singer are used to Styles rocking the coolest, edgiest looks. He’s known for his eclectic fashions, which range from ’70s vibe bell-bottoms, colorful manicures, dresses paired with combat boots (a la his famous Vogue cover), and pearl necklaces. But Styles is definitely making waves with the boas that graced his neck at the Grammys — and he wore not one, but two different ones throughout the night.

First, Styles swooned the crowd during his performance of hit song “Watermelon Sugar,” during which he paired a black leather suit with a lime green feather boa. But his fashion fun didn’t stop there. Later on in the evening, Styles accepted his award for best solo performance in a different outfit: a yellow and black plaid suit jacket over a very ’70s-style peach V-neck sweater top and brown corduroy pants. Oh, and — of course — this called for a boa change.

To top off his already very Clueless-inspired ensemble, Styles wore a lavender-colored boa around his neck (in case you don’t remember, Cher Horowitz rocked a feather boa in the film). Either Styles drew inspo from the iconic ‘90s film, or it’s a really chic coincidence.