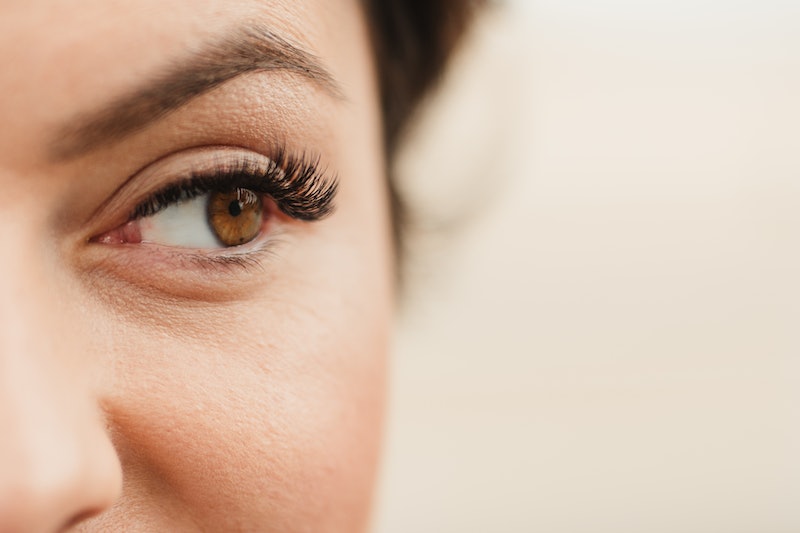 Most people joke that liquid eyeliner is the hardest makeup product to apply, and false lashes definitely take the cake as runner up. From the glue to the trimming, things can get wonky when it comes to application (and that doesn't even touch on the removal). What can ya do? Well, once you look into how magnetic lashes work, your faux lash life will become much less of a headache.

Let's be honest: The lash glue involved in regular falsies can get messy. Not only are you often left with that pesky white residue all over your faux lengths and your lid, but getting the dry time just right so your lash adheres perfectly is tricky, too. Then, if you're not extremely careful when you remove them, you can potentially lose your own lashes. While sure, with practice, a traditional set of false lashes can work, not everyone has the time to sit down in front of three different YouTube videos to nail their application technique. Could magnetic lashes be the answer?

If you've never used the relatively new lash option, experts Dionne Phillips, founder of D'Lashes, and Ann McFerran, founder of Glamnetic, answer all of your magnetic lash questions, including how they work and how to remove them safely.

According to McFerran, there are plenty of reasons for using magnetic falsies besides avoiding lash glue woes. A liner-style magnetic lash is more versatile as it can easily be adjusted without adding more product if you're unhappy with the placement, she says.

For Phillips, though, opting for magnetic lashes comes down to personal preference. But she notes that those with pacemakers or heart conditions as well as chemotherapy patients should avoid them, because magnets may interfere with the types of machines used (and they're already used in some chemotherapy treatments).

What Types of Magnetic Lashes Are There?

There are two types of magnetic lashes to choose from, says Phillips. The first is a "sandwich" style. With this design, there are actually two lashes — a top and bottom — that feature tiny, bar-like magnets attached to them. When applied, your natural lashes become "sandwiched" between the two magnetic strip lashes. Ardell's magnetic lashes are this version.

The other option involves a magnetic eyeliner (like Arishine's Magnetic Liner & Lashes Kit). According to Phillips, these lashes are applied by using a magnetic polymer liner close to the lash line, which adheres to the extensions.

Of course, you avoid glue (and the risks of glue) altogether when using magnetic lashes. But is one style of magnetic falsies better than the other? McFerran recommends the liner-based style: "Magnetic lashes that adhere using no liner are placed closer and more directly onto your natural lashes," she explains. "This can lead to uncomfortable tugging sensations." As for Phillips, she says it's more about personal preference — so if you don't feel like your eyeliner skills are up to par, go with the sandwich style.

How Do You Apply Magnetic Lashes?

For liner-based lashes, Phillips says to apply the liner close to the lash line and to the strip lash itself to help add more hold. The trick is making sure you apply enough liner so that the lash can adhere, she says. Let both the strip lash and the liner dry, then place the lash on top.

How Do You Remove Magnetic Lashes?

As with your typical false lashes, it's important to be careful during magnetic lash removal. Phillips recommends gently separating sandwich style lashes from one another with your fingers instead of simply pulling the whole set off at once. With liner-based magnetic lashes, she says to use an oil-based eye makeup remover to dissolve the polymer eyeliner blend, which will cause the lashes to fall away naturally.

If you're a faux lash devotee, you are probably aware traditional strips can be reused as long as they're properly cared for. The good news? The same is true with magnetic lashes — but they're even more resilient for reuse.

"Glue-based lashes often become damaged by glue after their first wear," says McFerran. "Magnetic lashes can be worn and reused about 40 times [depending on the brand], so you can get the most out of every lash and make a sustainable choice by using them." Since you're not using glue, you don't have to wash and clean them every time you remove them — aka they're less maintenance.

To keep your magnetic lashes in tip-top shape, McFerran says you can just use your fingernail to scrape away any residue left from the liner, but using a micellar water on the lash band and lash works too.