Liha Okunniwa On The Power Of Shea Butter 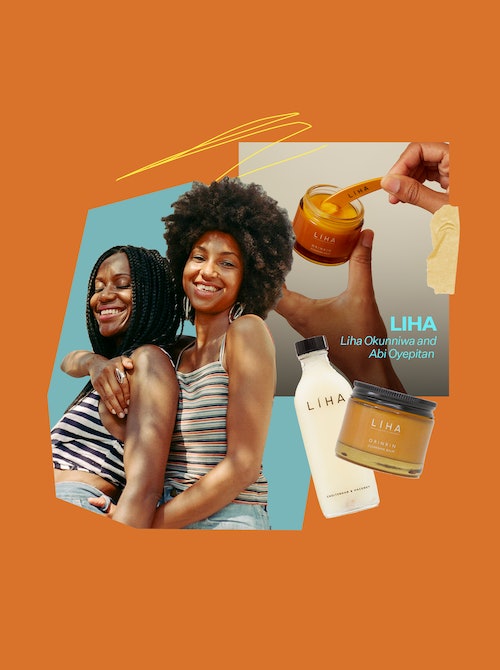 In Beauty Roots, Bustle chats with diverse creators in the beauty industry about how their heritage has influenced their businesses and routines. Here, LIHA Beauty founder Liha Okunniwa shares how the beauty and wellness rituals of her Nigerian and English parents shaped everything from the brand’s formulas to its minimalist packaging.

Liha Okunniwa takes moisturising very seriously. “The thought of not [doing it] every day is triggering,” she laughs, explaining that her affiliation for this particular self-care ritual is what led to the creation of LIHA.

A luxe natural skincare and wellness range, LIHA was founded in 2017 by Okunniwa and her friend Abi Oyepitan. The pair met in university, where textured hair and Yoruba beauty staples weren’t exactly common on campus. “In the late ’90s it was so rare to come across another Black girl with natural hair, so we automatically became friends,” explains Okunniwa.

According to the website, LIHA combines its founders’ African roots with their quintessentially British attitude (more on that later). And it all started with one ingredient: shea butter. “Growing up with a Nigerian father meant there was always slabs of nourishing shea butter at my Gloucestershire home,” Okunniwa explains, “but during my student days, it was difficult to source the really good stuff.”

As well as bonding over natural hair remedies, live music, and vintage clothing, Okunniwa also connected with Oyepitan over a shared love for shea butter. “So, whenever Abi travelled to Africa, my number one request was to bring back some shea butter from her father’s Nigerian hometown,” she says. “I love the really waxy variety, which as a child, my English aromatherapist mother would slather on my skin, work through my short afro and blend with plant oils to soothe ailments.”

And while shea continued to be a key component in the founders’ beauty routine long after graduating and finding their feet in the real world (Okunniwa in art publishing, Oyepitan in Olympic-level athletics), they couldn’t understand why the multi-tasking hero ingredient wasn’t being celebrated within mainstream beauty spaces.

“It didn’t make sense that so many people were unaware of its many benefits and that there weren’t any premium ranges out there harnessing its incredible potential,” Okunniwa tells me. “So, instead of waiting around for somebody else to do it, we decide to create our own!”

That was seven years ago. What began as two friends trying something new has since become an industry leader in natural beauty that can count celebrities such as FKA Twigs amongst its customers. Here, Okunniwa talks me through the LIHA journey so far and explains more about how her heritage played a key role in the evolution of the brand.

How has your mixed heritage influenced LIHA products?

My Nigerian father had strong traditional values and definitely passed on a lot of cultural knowledge and wisdom. He was immensely proud of his African heritage, which was reflected in the gleam of my skin and soft, springy curls of my short afro. They were both maintained with daily applications of the thick and waxy shea butter my father would return with after visits to Nigeria which was massaged into my skin and worked through damp strands after bathing. My English mother would draw on the aromatherapy expertise passed down through the generations of her family to keep ailments way through bespoke shea butter blends mixed with gorgeous essential oils ranging from decongesting eucalyptus through to soothing lavender. A combination of these influences led me to tinkering with my own formulas from a young age and inspired some of the LIHA’s earliest kitchen-table forays which were a blend of the two principles which form the brand’s now signature fusion of West African botanical extracts with English aromatherapy.

What inspired your passion for skincare?

Because my dad was very strict it meant that experimenting with my hair wasn’t an option which meant, thankfully, it stayed in its natural state throughout my youth and beyond. Make-up definitely wasn’t allowed, so skincare became my favourite way to explore beauty products. It was whilst working at The Body Shop during my teenage years that my passion and knowledge really intensified. I loved nerding out over the ingredients, advising customers on the best products for their concerns and it was amazing to meet Anita Roddick whose approach to beauty and business was so inspiring. I then got a position at Space NK, where my obsession continued and the counters contained the best of the beauty industry. Despite this customers always asked about my shea butter and black soap routine and that’s when I first realised there were so many people who were yet to discover the benefits of traditional African skincare.

How would you describe the Yoruba approach to indulging in beauty?

Within Yoruba culture, so many rituals are linked together and there’s definitely an element of mindfulness, minimising the amount of waste, and making the most of your resources. Making beautifying oils, soaps and lotions from the nuts, tree bark and plants which grew around you was a skill traditionally learned by every young woman who are taught that if you’re cooking with coconut oil then the leftovers can be used to make nourishing and strengthening hair products, whilst the ashes can be made into smoothing black soap. It’s an approach that’s inspired LIHA’s minimalist take on beauty which instead of constantly producing lots of products waste provides consumers with high-quality, sustainable, multi-purpose products – such as our Idan Oil which can be used as a solid perfume, body moisturiser, hand and foot treatment and hair mask – which means they can buy well, and buy less.

Is this why LIHA products not only look stylish, but are practical and kind to the planet?

Yes, the streamlined design and multi-tasking benefits of our products was inspired by my father who committed to minimalism after hitchiking through Sweden in the ’60s and would reach for shea butter whenever any part of my skin was ashy. My mother, who was a massive hippy, made me aware of our responsiblity to care for the planet from a young age would take me to Greenpeace protests where protecting the world’s forests, oceans and climate was on the agenda. It’s why it was so imortant to me that all of our 100% vegan and cruelty-free products are made from natural and organic ingredients with packaging made from recyclable renewable materials, and as little plastic as possible.

Shea butter is often referred to as ‘Women’s Gold’, what does the term mean and why does the ingredient feature so prominently throughout LIHA?

Shea butter is the ultimate African beauty secret whose naturally high concentration of vitamin A and E has been used amongst women to protect and regenerate skin for centuries. It’s a treasured ingredient which comes from shea nuts which grow on Karite trees found naturally throughout West Africa where women are predominantly responsible for its production, which has given them the ability to improve the quality of life for their families and community. The golden shade of the Nigerian Shea butter used within our deeply moisturising, repairing and healing LIHA Raw Shea Butter: Gold, alongside the financial independence it provides for the cooperatives who wild-harvest our ingredients has led to shea butter becoming known as ‘Women’s Gold’.