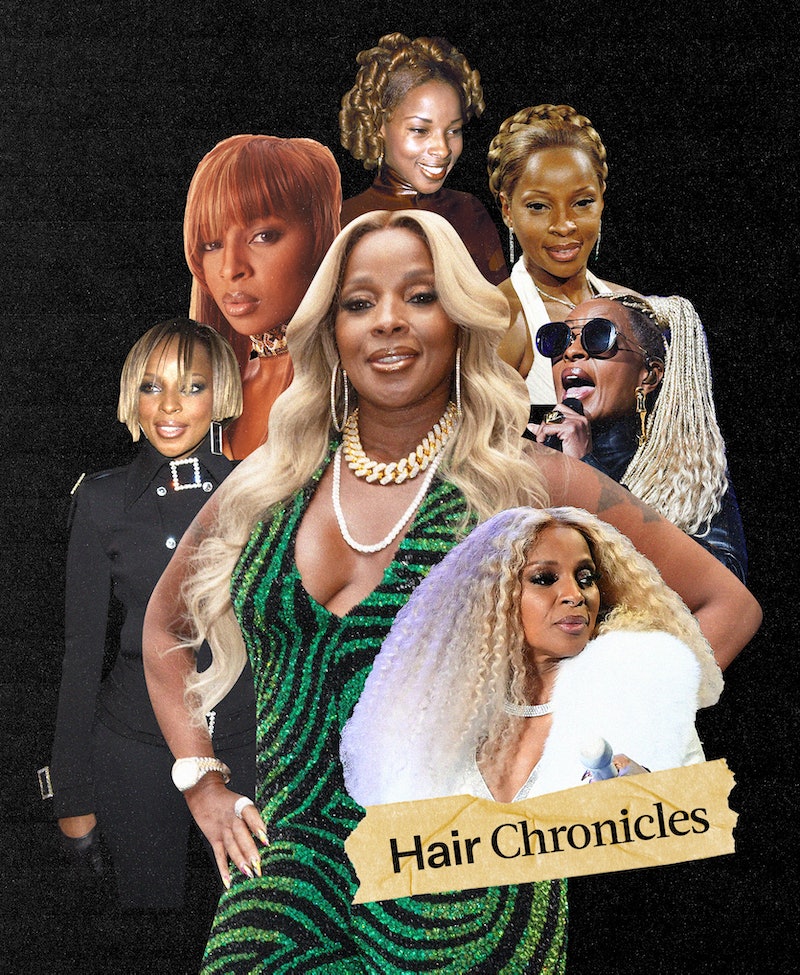 In Hair Chronicles, celebrities tell us about their most memorable hairstyles throughout the years, from the ones they’d wear again to those they completely regret. Here, Mary J. Blige chats about dyeing her own hair, taking risks, and the unexpected style of bangs she now appreciates.

Mary J. Blige regularly topped the music charts thanks to a casual nine Grammy Award-winning albums. But the singer-songwriter is also renowned for rocking multiple trendsetting hairstyles since the ‘90s: the style chameleon has worn everything from sleek blonde lengths to fiery red pixie cuts. As it turns out, Blige’s affinity for experimenting with different hairdos started long before becoming the queen of hip-hop soul.

“My hair was sandy brown when I was younger, but I didn't like it — so I started dyeing my hair blonde and platinum in seventh or eighth grade,” she tells me over Zoom. “Before you know it, it went to red and pink.” By the time she got into the music industry at 19-years-old, Blige admits her hair “was a mess” after all the color treatments. “For a long time, I had to keep my hair braided underneath weaves so that it could grow back and become full again,” she says. “[My hair] went through a lot, but I had fun with it, too.”

These days, Blige takes a much gentler approach to her natural strands. Her tip: Keep your edges moisturized using natural oils (castor oil is great for maintaining healthy edges) if you have textured and/or chemically treated hair. And avoid overloading it with too many treatments at once. “[For instance], you can’t have perm and color at the same time,” she warns. “Everything’s just going to fall out.”

While the Bronx-born singer — who’s partnering with Gold Bold’s #ChampionYourSkin campaign, which celebrates and uplifts Black stuntwomen in the entertainment industry — now has her hair care routine down pat, figuring out her beauty game has been more of a journey. At age 50, the living legend’s skin care regimen comes down to consistency, with a focus on staying hydrated and incorporating weekly facials and body scrubs — but perhaps her best beauty advice can’t be found anywhere on a shelf. “[It’s about] trying to think positive because carrying heavy energy causes you to look heavy,” says Blige.

Below, the star walks us through some of her most memorable hair looks throughout the past three decades. (And, BTW, fans can now watch her recently released Amazon Prime documentary about her career-defining My Life album.)

“That’s all my own hair. We went to the nearest store, found a color, used peroxide to bring up the color, and dyed it ourselves.”

“Back then, I wasn’t too happy with this look, but now I’m looking at it like, ‘Wow, that’s kind of hot.’ It’s definitely edgy.”

“I had a hairstylist who wasn’t afraid to take risks. During [the No More Drama] era, I was risking everything; I didn’t care. I even rocked black and white hair in the ‘Family Affair’ music video.”

“I was nominated for eight Grammys, so it was such a huge night. I wanted to look special. The Breakthrough album signified coming through so much darkness to get to some light — and it represented me feeling like a queen. The [braided crown] helped me believe it.”

“Naomi Campbell was my inspiration that night, so I was channeling her [at the Cannes Film Festival]. I was married then, so everything was mature and adult-looking, hence the bob. I love that hair, and I would wear it again for sure.”

“I had shaved all my hair on the sides, so I just had the top of my hair braided. We performed outside the entire time [at the Essence Festival] and it was super hot, so the braids were for convenience. But I was having fun with the platinum blonde.”

“[My hair] was big, because everything just felt big. I had gotten out of a horrible divorce, so my life was moving on. I felt like a stronger Mary. I just wanted everyone to know that I’m back and here I am — unapologetically. Take it or leave it.”

“This is not being afraid to be who I am — wearing my clothes, wearing my jewelry, wearing my hair and not letting it wear me. I never thought that I could pull off long hair, but it looks good. The long, flowing waves are sexy and glam. I have a long way to go, but I’ve arrived to where I’m at right now in life, and it feels really good.”