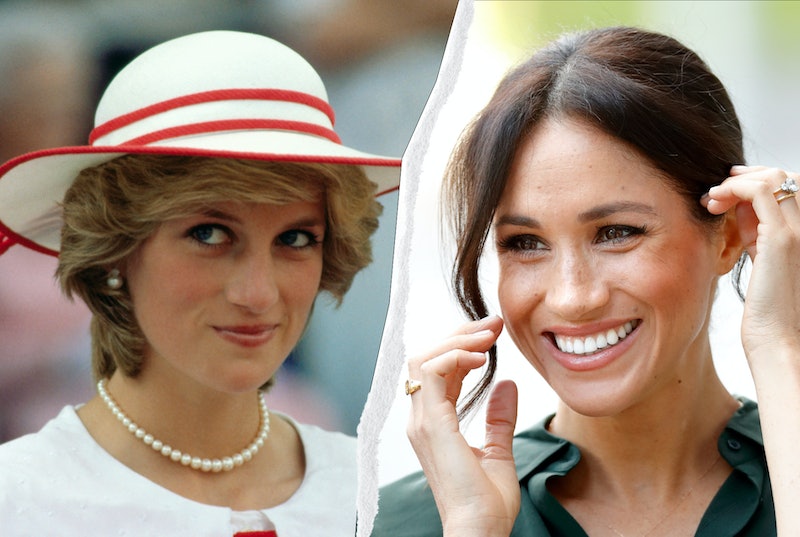 Meghan Markle and Prince Harry released one of the most adorable black and white portraits of the couple to date, just ahead of their episode of Time100 Talks that debuted Oct. 20. They are both in suiting, Markle wearing a white T-shirt underneath while Prince Harry opts for a classic button-down shirt. Though the former Duchess is not wearing much jewelry, on her left wrist is a single Cartier Love Bracelet as well as a gold Cartier Tank watch. And it's speculated that the latter has special meaning as Meghan Markle may be wearing Princess Diana's watch in the photo.

Yes, Markle's timepiece looks eerily similar to the version of the watch that once graced the wrist of Prince Harry’s late mother. Markle has publicly praised the watch style before, telling Hello back in 2015 that it was her first-ever splurge when Suits was picked up for network TV. It's important to note, however, that it was the two-tone version that she gifted herself years ago, not the gold version Princess Diana once wore and Markle could be wearing now.

Though no official statement has been made about the watch's connection to Princess Diana, it wouldn't be the first time Markle has borrowed from her late mother-in-law. She's previously worn everything from the Princess’ butterfly earrings to her aquamarine cocktail ring.

More like this
Kate Middleton Wore The Ultimate '90s Power Suit
By Sam Ramsden
Hailey Bieber Looks Just Like Princess Diana & I Need To Copy Her ASAP
By Sophie McEvoy
'Emily In Paris' Lucien Laviscount & Lucas Bravo Owned Paris Fashion Week
By El Hunt
Kylie Jenner Joins The Bondage Trend In At Paris Fashion Week
By El Hunt
Get Even More From Bustle — Sign Up For The Newsletter
From hair trends to relationship advice, our daily newsletter has everything you need to sound like a person who’s on TikTok, even if you aren’t.