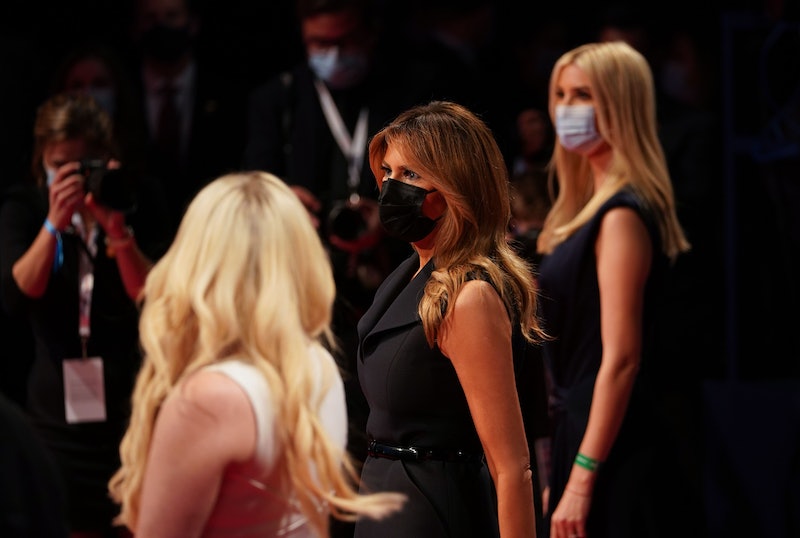 Despite no one asking for it, the third and final presidential debate took place Thursday night in Nashville, Tenn. Joe Biden and Donald Trump met face-to-face for the first time since Trump tested positive for coronavirus and was hospitalized for several days. Now, with the Nov. 3 general election less than two weeks away, all eyes are on the candidates and their families.

For this debate, the Trump clan showed up in contrasting looks, one of their signature sartorial moves. Donald Trump Jr.'s girlfriend, former Fox News host Kimberly Guilfoyle, and Ivanka arrived at the debate venue wearing matching navy ensembles. With Melania and Lara Trump wearing black outfits, all four women coordinated in darker tones. The only exception was Tiffany Trump, who was somewhat of an outlier in her black-and-cream dress.

At the last debate in September, Ivanka and her stepmother Melania showed up in polar opposite suits. Ivanka and Guilfoyle again matched, both wearing head-to-toe white looks (one can only assume they most certainly plan their outfits together ahead of time). Melania, meanwhile, chose a black pinstripe suit by the problematic Dolce & Gabbana, accessorizing with navy suede pumps from Manolo Blahnik. The moody color conveyed a distinctly darker note, with some Twitter users saying it seemed more fitting for a mob boss.

Even though the Trump administration has flip-flopped on the efficacy of wearing masks and continues to host massive public rallies where masks are optional, the Trump camp showed up to the debate wearing them. They also appeared to keep them on after they settled into their seats in the audience, unlike last time.

More like this
Bella Hadid's Flare Jeans Under A Dress Outfit Is So Nostalgic
By Allie Fasanella
These Are Kylie Jenner's Best Paris Fashion Week Looks... So Far
By Dominique Norman
Hailey Bieber Channeled Jackie Kennedy At Paris Fashion Week
By Allie Fasanella
How To Shop Your Favourite Celebrities’ Closets On Depop
By Darshita Goyal
Get Even More From Bustle — Sign Up For The Newsletter