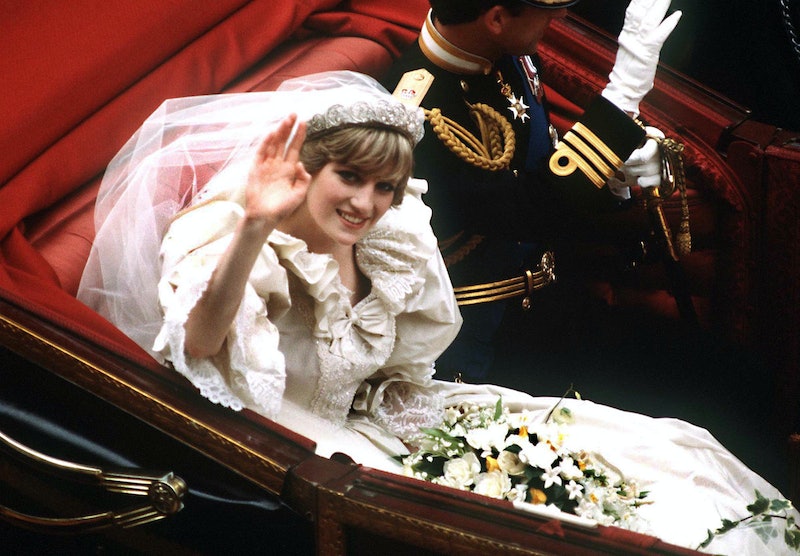 Fascination with royal weddings is at an all-time high, and it’s not waning anytime soon. From Meghan Markle’s bridal dress that’s inspired many others to Princess Diana’s wedding gown that was recreated on The Crown, fans can’t get enough of the royals’ matrimony wardrobes.

Considering all eyes are on the bride during her big day, a wedding dress is perhaps the most important element of an unforgettable ceremony — and there's nothing like the dresses draped onto the bodies of the UK's real deal royals. Featuring extravagant trains, intricate embellishments, and the prettiest lace details, their wedding dresses are never short of stunning. With access to the crown jewels and the industry's best designers on call, it's no wonder royal brides always dazzle.

For bridal inspiration beyond your wildest dreams, it's worth diving into the British royal wedding archives. Ahead, find every royal wedding dress in UK history and the story behind it.

Travel back to 1863, when Queen Victoria's eldest son, Albert Edward of Wales, married Princess Alexandra of Denmark, and you'll discover a lavishly decorated gown. A silk satin dress, featuring a petticoat of orange blossom trimmings, myrtle, puffs of tulle, and Honiton lace, it was quite the spectacle.

Bride to Prince George, Prince Albert Edward's son, Victoria Mary of Teck wed in 1893 in a garment trimmed with ostrich feathers and orange blossoms. If ever there was a extremely detailed gown, it was hers, its white satin lined with silver and fine Honiton lace.

Taking place in 1904, Queen Victoria's granddaughter, Princess Alice, had a wedding at Windsor Castle that was highlighted by a lace-clad gown. Unlike the dresses that predated hers, it did not have a court train, despite having the same traditional orange blossom and myrtle trimmings.

Yet another granddaughter of Queen Victoria wed in a lovely dress. In 1905, Princess Margaret cascaded down the aisle in a sweeping gown full of lace details. She was quite a vision in white.

Princess Patricia of Connaught, Princess Margaret's younger sister, tied the knot in 1919 in a sleek, embellished gown that differed from her predecessors. Opting out of the floral trimmings, the wedding dress complimented her lengthy veil perfectly.

Great-granddaughter of Queen Victoria and daughter of Prince George, Princess Mary, said "I do" in 1922 at Westminster Abbey in an ivory silk gown. Of course, it was embroidered immaculately as this is British royalty we're talking here.

When it came to Wallis Simpson, bride to Prince Albert's older brother, Prince Edward, less was more. The bride wore a pale blue silk gown in 1937 that didn't need the fancy schmancy embellishments to be beautiful. The dress' hue was even custom made and dubbed "Wallis blue".

All hail the Queen — Queen Elizabeth, that is. Long before she took the throne, the Queen married in 1947 at Westminster Abbey in an ivory silk gown embroidered with crystal beads and white seed pearls. The garment was as lavish as it gets with a full 13-foot court train, patterned with stars and decorated with pearls.

Fast forward to 1960 and you'll discover Queen Elizabeth's younger sister, Princess Margaret dazzling in the first royal gown to be broadcast on television. The princess wore a silk organza dress designed by the same royal couturier, Norman Hartnell, that created the wedding garment worn by her big sis. Embellishments were minimal, making for such a simple, yet elegant gown.

Princess Alexandra of Kent's wedding dress made its debut in 1963. The daughter of Prince George and Queen Elizabeth's cousin married in a sleek silhouette with a cascading train. The dress featured lace — and more lace — as the material was layered over white tulle and added to the edges of the neckline and cuffs. Photos don't do it any justice, though, as delicate, gold embroidery underneath the lace allowed the gown to shimmer as the princess moved.

Well, well, well, if it isn't Queen Elizabeth's only daughter marrying in 1973 in a Tudor-style wedding dress featuring a high collar and medieval sleeves. The train capped at seven feet and the veil was quite simple, but Princess Anne looking absolutely stunning, nonetheless.

Princess Diana's dress of endless fabric could barely fit in the carriage that drove she and Prince Charles to the altar in 1981. The ivory taffeta gown was about as grandiose as they come, embroidered with sequins, frilled lace, and 10,000 pearls. She even wore a veil that was longer than the dress' train — and at 25 feet long, the train was already the longest in royal wedding history. Even an accident couldn’t detract from Diana’s big day. In Rosalind Coward’s book Diana: The Portrait, the Princess’ makeup artist Barbara Daly revealed that Diana spilled Quelques Fleurs perfume on her dress that morning. To hide it, Diana not only tucked in the front of the dress, but she cleverly held her bouquet in front of the stain. Talk about a royal hack.

In 1986, Princess Diana's brother-in-law married Sarah Ferguson, who wed in an ivory satin dress that featured an embellished bodice, three quarter length sleeves, and a 17-foot train. Accented with bows, bees, thistles, waves, and anchors for symbolism, not a single detail went unnoticed on this lavish gown that even had the couple's initials sewn into the train.

A dress made of ivory silk organza with crepe and tulle, Sophie Rhys-Jones' wedding ensemble in 1999 was picture-perfect. The garment seemed to pay homage to the Middle Ages, featuring a fitted, V-neck bodice and sleeves with fluted cuffs that had a medieval air. Although it didn't appear to be as embellished as the gowns belonging to previous royal brides, it did have a whopping 325,000 pearls and crystal beads embroidered into subtle patterns.

Princess Anne's son tied the knot with Autumn Kelly in 2008, and the nuptials birth the satin and Chantilly lace gown the bride wore beautifully. Its waist was accented by a three-tiered sash and the bride topped the garment off with a beaded bolero made from Chantilly lace to cove her shoulders.

On the long list of most iconic royal wedding dresses, Kate Middleton's gown would be at the top of the list. In 2011, Prince William's bride wore an Alexander McQueen head-turner whose handmade lace appliqué on the skirt and bodice stole the show. Hand-cut lace flowers also made it onto the ivory silk tulle of the dress, making it one stunning garment.

Yet another royal to marry in 2011, Zara Phillips, Princess Anne's only daughter, wed in a corseted white silk gown. Layers of lace underneath the skirt gave the simple garment volume. Although it opted out of the usual frills and lace details common amongst British royal wedding dresses, the gown was quite the vision.

Meghan Markle and Prince Harry married in May 2018, the bride wearing a gown by Clare Weight Keller for Givenchy as her ceremony look. It was her go-to boat-neck style made of silk with little embellishment to speak of, topped with a lace-trimmed veil for a classic, yet simple, look that will live in history.

In a special turn-of-events, Princess Beatrice and Edoardo Mapelli Mozzi married in secret on July 17, 2020, amid a COVID-19 pandemic, after postponing their originally-planned nuptials from May. For the ceremony, the Princess broke a recent royal wedding tradition, where the bride secretly tapped major women designers to create their gown. Instead, she wore a vintage dress, designed by Norman Hartnell, a gift from her grandmother, Queen Elizabeth II. The Queen is known to have worn the sleeveless dress twice, and Beatrice chose to add a heavy trim at the hem as well as sheer puff sleeves on each arm. Additionally, she wore a tiara, designed by master craftsmen at E. Wolff & Co. for Garrard & Co, also belonging to Queen Elizabeth II, called the Queen Mary’s Fringe Tiara. It was not only worn by the Queen on her own wedding, but also by Princess Anne on her wedding as well.

This article was originally published on May 16, 2018