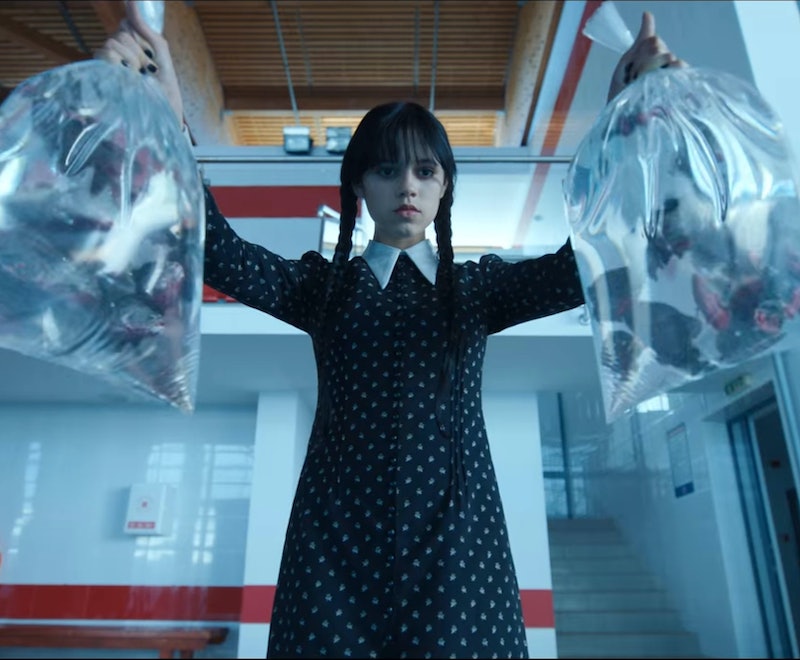 Long before e-girls and scene kids, Wednesday Addams was the queen of goth-chic look. The creepy family Addams has been a part of the modern cultural zeitgeist dating back to 1938, making several film and television appearances over the years. However, the OG spooky girl finally got her own spinoff, which premiered on Netflix on November 23 starring the macabre teen anti-hero played by Jenna Ortega

The costume designer for the show, Colleen Atwood, has several spooky accolades under her belt, including Sleepy Hollow, Sweeney Todd: The Demon Barber Of Fleet Street, and Fantastic Beasts: The Crimes of Grindelwald. While several of the designs were created by the designer to translate to screen, Atwood told Harper’s Bazaar that she also sourced Wednesday’s wardrobe from stores like Zara, as well as vintage shops — which is where her iconic black prom dress came from.

The angsty teen’s wardrobe was kept basic and clean, but with a cool, Gen Z update. Some of her staples throughout the season included a black Cambridge backpack and platform shoes, like oxfords and sneakers. Commentary on the young goth’s looks kicked off right away in Episode 1, with fellow student Ajax noting that she looks “like a living Instagram filter.” Honestly, true.

Take a look through some of the best looks from Wednesday.

More like this
15 Of Carrie Bradshaw’s Best Handbags From Sex & The City
By Dominique Norman
'Emily In Paris' Lucien Laviscount & Lucas Bravo Owned Paris Fashion Week
By El Hunt
Looking Back At Kylie Jenner's Best Fashion Week Looks
By Allie Fasanella
Camila Cabello Wore A Pearl Bra On The 2023 Grammys Red Carpet
By Alyssa Lapid
Get Even More From Bustle — Sign Up For The Newsletter
From hair trends to relationship advice, our daily newsletter has everything you need to sound like a person who’s on TikTok, even if you aren’t.