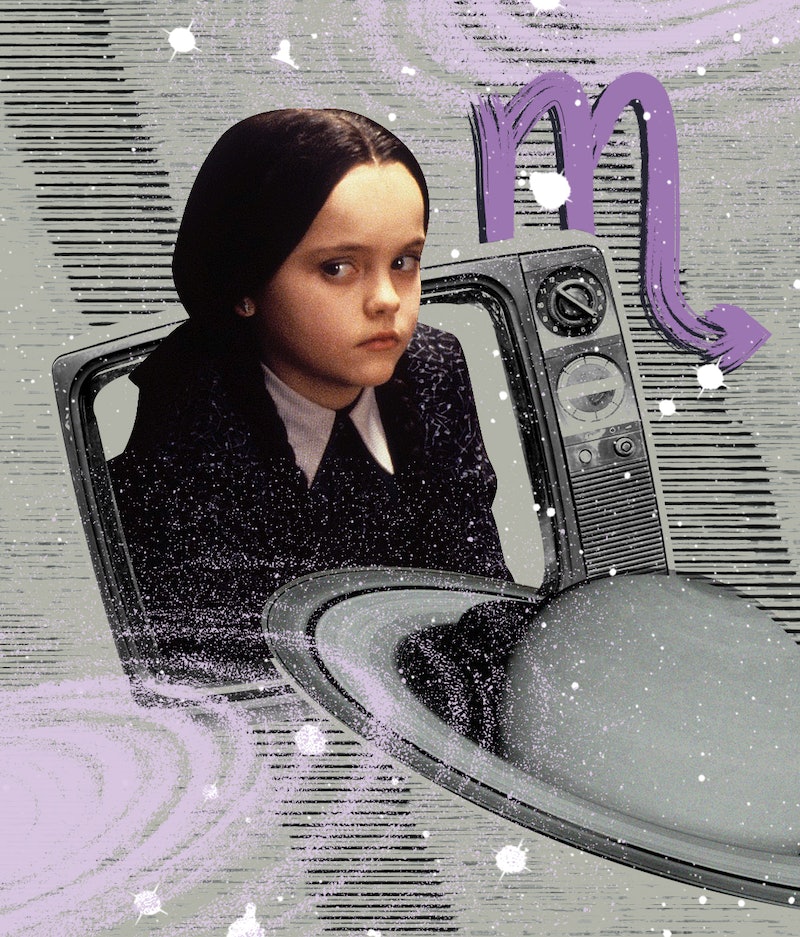 In Astrologically Speaking, astrologers make their case for your favorite character's zodiac sign, based on specific scenes, quotes, and even fashion choices. Here, Nina Kahn, author of Astrology for Life and Wander the Stars, explains why Wednesday Addams of The Addams Family is a total Scorpio. Spoilers for The Addams Family follow.

When it comes to Halloween, costumes and candy are fun and all — but one of the holiday’s truest joys is indulging in its many hauntingly thematic films. One of the most beloved characters in the spooky season pantheon is deadpan and death-obsessed Wednesday Addams, the singular daughter of the blackly comedic Addams Family. With her long black braids and sadistic tendencies, Wednesday is a true icon of all things scary, sarcastic, and spine-tingling. Plus, her ultra-recognizable look makes for a great Halloween costume.

Since All Hallow’s Eve is right around the corner and the new Addams Family spinoff series Wednesday premieres on Netflix on Nov. 23, now is the perfect time to get to know the Addams’ only daughter through an astrological lens. While this morose and quirky family has been depicted in various mediums through the years, I revisited the iconic 1991 film, The Addams Family — which stars Christina Ricci as Wednesday — in order to bring you an astrological assessment of her character. Given her macabre interests, deadpan demeanor, and skeptical sensibilities, I’m confident that Wednesday Addams is a full-blooded Scorpio.

As the sign symbolized by the stinger-wielding scorpion, Scorpios are known for their intensity, drive, and powerful presence. They often exude a quiet but immovable confidence, and Wednesday totally embodies these qualities. She’s not intimidated by adults or peers and doesn’t care about fitting in with others in a surface-level way. In fact, despite her being a child, people seem much more intimidated by her — even her Uncle Fester is unnerved by her sharp and sardonic presence when he first arrives at the family home.

Scorpios are also very private and introspective people with a strong poker face, so it’s no surprise that Wednesday isn’t very talkative. However, when she does speak, she’s dry, direct, and to the point. Her deadpan disposition and unwavering sense of confidence give off the silent-but-deadly energy of a Scorpio sun. For example, on Halloween night, Wednesday comes downstairs wearing her everyday clothes and is asked about her apparent lack of costume. “This is my costume,” she replies in her classically expressionless fashion. “I’m a homicidal maniac, they look just like everyone else.” No fluffy skirts or unnecessary sparkles here — just a dark sense of humor, an understated sense of conviction, and a gloriously incisive glare. It doesn’t get any more Scorpio than that.

At the end of the day though, despite their edgy exteriors, Scorpios are one of the emotional water signs — so you know Wednesday has a sensitive side buried somewhere in there, too. Case in point? Once Uncle Fester eventually earns her trust and is ingratiated into her inner circle, it’s easy to see Wednesday’s softer side. She asks him to tuck her into bed and kiss her doll goodnight, seeks him out for playtime, and is excited to have him attend her dramatic school performance. That’s the thing about Scorpios: Once you get them to lower their defensive stinger, they’re extraordinarily loyal and devoted companions.

A campy love of the macabre and mysterious is an Addams family affair, but Wednesday seems to take this interest particularly seriously. In fact, one of the most notable aspects of Wednesday’s character is her fascination with all things sadistic. Throughout The Addams Family, you’ll find her getting up to some sort of morbid activity — such as electrocuting her brother, selling toxic lemonade to neighborhood kids, or putting on a fake-blood-laden performance at school. She’s an amateur expert on the Bermuda Triangle phenomenon, and her mother cites the “death at sea” element of the mystery as being the reason for her interest. The only times in the film that Wednesday trades in her emotionless glare for a gleeful smile is when she's experiencing the joys of torturing her brother.

Not all Scorpios are into ghastly or grotesque things, of course. That said, they’re often less repelled by the spookier sides of life than the average person — as Scorpio is the sign associated with occult and taboo topics. Co-ruled by Mars (planet of war and physicality) and Pluto (planet of extremes and transformations), Scorpios aren’t afraid to delve into the darker aspects of humanity. Like Wednesday, Scorpios courageously embrace the extremes of our existence, whether that’s pain, the cycle of life, or unsolved mysteries.

Stealthy Scorpios are born with built-in BS detectors, and they don’t trust people easily. Wednesday doesn’t either, and this is made clear once the man claiming to be her Uncle Fester shows up at the family home out of the blue. She’s initially the only one of the Addams who is dubious of Uncle Fester’s true identity, skeptically noting that the inconsistency between his current state and the family’s memory of him “doesn’t make sense.” She’s also the person who eventually confirms that Uncle Fester isn’t quite who he claimed to be — which is no shocker, given her Scorpio tendencies.

During Uncle Fester’s first night in the house, Wednesday lurks outside his room suspiciously — at which point he slams the door and calls her a “nosy little brat” under his breath. While “nosy brat” is certainly a harsh assessment, it is true that Scorpios have a strong desire to get to the bottom of things. If they develop a hunch or get hit with a strong intuition about whether something is truthful or not, they tend to keep investigating deeper into the matter until they’ve solved the mystery. With that in mind, Wednesday’s mistrust makes total sense. Even though her parents trusted Uncle Fester, Wednesday initially chose to trust her gut and come to her own conclusions, rather than implicitly trusting others.

Like a true Scorpio, macabre-loving Wednesday oozes a quiet confidence and isn’t easily fooled or manipulated. It appears that the newest interpretation of this character in Wednesday will share these Scorpio-like qualities, too — as, according to Netflix’s description of the upcoming series, it’s slated to be a “sleuthing, supernaturally infused mystery” that follows Wednesday’s “attempts to master her emerging psychic ability ... and solve the supernatural mystery that embroiled her parents 25 years ago.” Sleuthing? Psychic powers? Supernatural mysteries? Sounds like some serious Scorpio action to me.

More like this
Andie From 'How To Lose A Guy In 10 Days' Is A Total Gemini
By Nina Kahn
At 28, Rosie Perez Risked Her Career To Stop Playing Stereotypes
By Gabrielle Bondi
February's Full Snow Moon Will Breeze Right By These 3 Zodiac Signs
By Brittany Beringer
7 Dos & Don'ts For The February 2023 Full Snow Moon
By Brittany Beringer
Get Even More From Bustle — Sign Up For The Newsletter
From hair trends to relationship advice, our daily newsletter has everything you need to sound like a person who’s on TikTok, even if you aren’t.