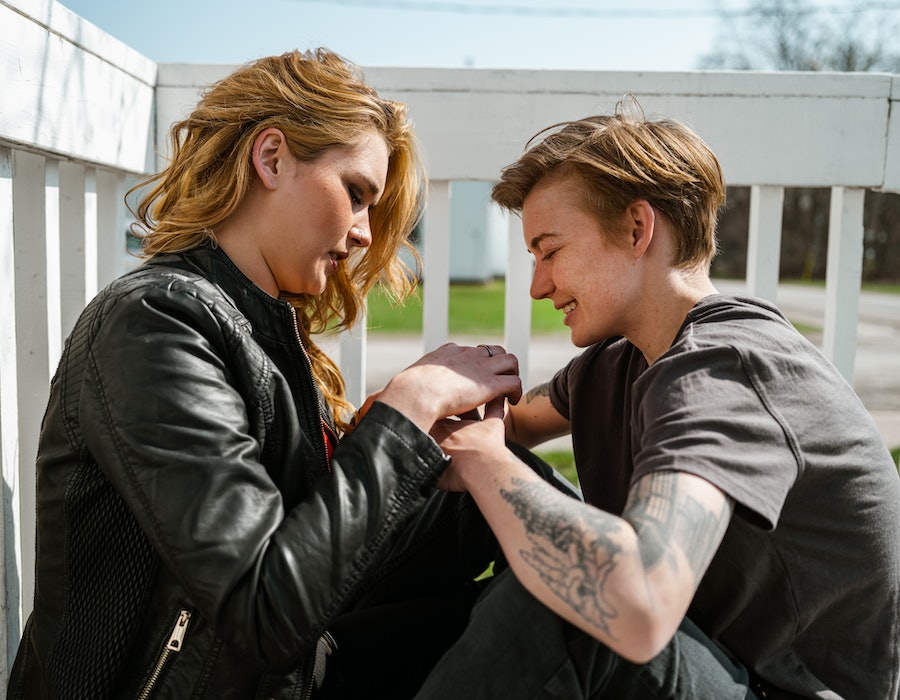 Every type of relationship, be it short fling or long-term commitment, has the potential for ebbs and flows where you might feel like more or less of a priority to your partner at certain moments. It’s completely natural that one person might need to take a back seat to something critical the other is going through, like a grueling, busy period at work or a health concern with a family member. And sometimes it can be a lower-stakes issue, too, like catching up with a beloved friend who’s back in town for the first time in awhile.

Then, there are matters about which you might each have different priorities, like how important it is to save funds for the future or spend time with family. If you often disagree, it’s easy to feel like your partner isn’t prioritizing you, even if that’s not the case.

Your partner or spouse can’t always put you first, but if you consistently don’t feel like a priority in your relationship it may be time to take a step back and evaluate where things are headed. Below, experts outline some key concerns with considering.

1. Your Partner Is Always Flaking On You

When you’re standing outside a restaurant waiting for your partner and watching the minutes tick by, it’s easy to feel like you’re not a priority. Danielle Forshee, Psy.D. and LCSW, points out that there are very legitimate reasons someone might be consistently late to meet you, like ADHD for example. Difficulties with focus and concentration can easily lead to losing track of time or even forgetting dates. But assuming that’s not the case and that you’ve told your partner that flakiness bothers you, this might be worth paying attention to. Forshee explains that you might ask yourself, “Are they really looking for a committed relationship the way in which I am? Is this something that I can accept in a life partner? They're showing me this behavior now; is it something that’s major or minor?” If that’s not for you, she explains, it might not be a relationship you should move forward with.

Once again, Forshee cautions that some people just don’t find birthdays and anniversaries to be all that important, but that alone isn’t necessarily a sign the relationship is doomed. This is where a potential misalignment of priorities can cause you to feel like you’re not one at all. “If there's a mismatch in terms of value, and let's say you're with someone who does not value [special occasions] yet you do, it's matter of how you manage that inherent difference, because that could be a potential problem,” she adds. Basically, if you’ve told someone, “Hey, I’d really like to set aside some time to celebrate our anniversary in a meaningful way,” and they consistently ignore that request, you’d have some ground to believe that your requests, and maybe you, aren’t being prioritized.

3. You Feel Single, Even Though You're Not

If you're alone more than not, and your instinct tells you that your relationship is over, you might just be right. A key example of this is when, according to psychologist Antonia Hall, "Deep in your gut you often have a lonely feeling, as though you've already been dumped, even though you're still in a relationship." It’s unlikely you’d feel like your relationship is already over when your partner puts effort into making sure you feel like a priority.

4. Your Partner Doesn't Try To Meet Your Needs & Requests

When someone is prioritizing their relationship, they care about meeting their partner’s needs. "A partner can’t meet your needs all the time, but there’s a difference between someone working on their behavior because it’s important to their partner and just temporarily placating them until they can go back to status quo. If a person isn’t willing to put in consistent effort after you’ve spoken up, they’re not prioritizing your needs or the relationship," says Anita Chilpala, LMFT, and owner of Relationship Reality 312.

An example of this might be failing to meet reasonable requests. If you’ve told your partner, “I really don’t like it when you don’t answer my texts for eight hours. I’d love to check in once or twice per day,” and they make no effort to do so, that’s a problem according to Forshee. “That begs the question of the level of commitment that they have, or the level of ability to connect on that deeper emotional level of wanting to go out of their way to make you feel good.”

5. Your Partner Can’t Give Up Their ‘Single Life’ Schedule

Couples have varying degrees of how much time they feel they need to spend with each other. According to Forshee, some may value their independence more than others, and some may not want to be apart for too long. But it’s how you do — or don’t — meet in the middle that matters. “It's a matter of talking about what feels right with your partner and finding a common ground about what works for both of you. It's very common for one party in a relationship to need or require more alone time, or social time with their friends, versus the other party. Both of you need to get your needs met. But both of you also need to find common ground and give something up a little bit in terms of ‘when we were single’ versus ‘when we're not single,’” she explains.

So if your partner wants to devote the same exact same amount of time to friends, family, work, and hobbies that they used to before you started dating without any compromise, there may be legitimate cause for concern. If you’re worried it’s a sign that his friends are more important than you, don’t jump to conclusions, but do consider if he’s capable of meeting you half way.

6. Your Partner Rejects All Labels

Labels aren't for everyone. But, according to Marital and Family Relationships therapist Dr. Ashley Arn, if you've been together for a while and things have never been official, then it’s understandable you might not feel like a priority. Forshee agrees. If you’ve been dating for a considerable amount of time and they’re rejecting all possible romantic labels like “partner,” “girlfriend,” or “person I’m seeing,” etc, she explains, “That would be a red flag that they're not on the same page as you.”

7. Your Partner Doesn't Fight With You

According to Forshee, if you aren’t fighting at all, that’s a potential concern. She’s seen many couples in her practice who claim to be on the brink of divorce but wonder why they’re not fighting. “Usually in those kinds of cases, both parties typically try to avoid any kind of conflict about negative feelings they feel, or conflict about negative feelings the other party might feel. They’re averse to initiating conversation about something that may potentially create conflict,” she explains. This, understandably, isn’t the most conducive to open communication, and it can be hard to feel like a priority if you’re not communicating openly and without reservation.

If your partner is fixated on only the physical and it bothers you, that could be a sign that they’re not prioritizing the type of relationship you want. “They may just want to be hooking up, and that's good enough for them. That's what they want at that point, and that's okay. But maybe it’s not for the other person,” Forshee explains.

When it comes to intimacy, Arn suggests a sign that you might not be a priority is if you’re never asked to stay the night after a hook up.

9. You Haven't Met Anyone In Your Partner’s Life

A common benchmark of a relationship progressing is taking a partner home to meet the family. If you never make those connections with people in your partner's life, it could be because you're not a priority to them, according to Arn. If you've been together for a while, it’s reasonable that you’d know at least know a few people in their lives.

Forshee agrees this red flag could necessitate a moment of reflection. “It's time to step back and look at the broader picture of what is happening, what you are really looking for in the long term, and have that conversation with that person, and see if they're on the same page or not.”

This article was originally published on Sep. 30, 2016